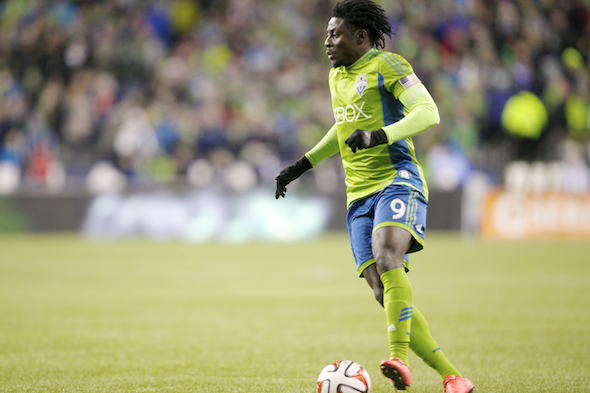 Sounders forward Obafemi Martins and defender Chad Marshall were named Tuesday to the 2014 MLS Best XI, which recognizes the league’s top 11 players, including one goalkeeper, three defenders, four midfielders and three forwards. This is the third Best XI selection for Marshall (also 2008-09 with Columbus) and the first for Martins.

Notable by his absence was Clint Dempsey, who missed games due to his commitment to the U.S. World Cup team.

In his first year with the Sounders, Marshall became the first in league history named Defender of the Year three times. He led the league with 136 interceptions and recorded 126 headers won, 206 clearances and an 83 percent passing accuracy. The 11-year MLS veteran also recorded one goal — an 84th-minute winner against Philadelphia May 3 — and matched a career-high with three assists.

Marshall and Martins are the fourth and fifth Seattle players to earn Best XI honors, joining midfielder Freddie Ljungberg in 2009, goalkeeper Kasey Keller in 2011 and Osvaldo Alonso in 2012.

The Best XI members were voted on by media, players and coaches and general managers.