After finishing coach Chris Petersen’s first-season on an uptick, the Huskies appear slated for a date in the desert — perhaps against a school from the Big 12. 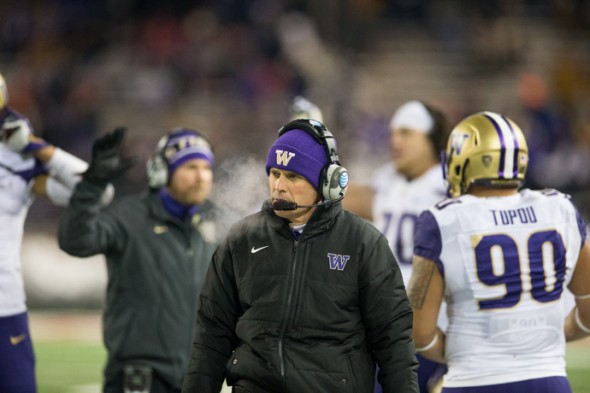 For a Huskies fan enduring another cold, wet Seattle winter, there are certainly worse places to visit in January than Tempe, AZ.

So thanks may be in order for Washington football after it won two of its final three games and dominated Washington State, 31-13, in the coldest Apple Cup on record. It appears the ultra-devoted in the UW constituency could see the Huskies play in the Cactus Bowl Jan. 2 at Sun Devil Stadium on the Arizona State campus.

The Huskies (8-5, 4-5 Pac-12) don’t find out their bowl fate until the College Football Playoff selections are released Sunday. But as the No. 8 finisher in the Pac-12, UW would earn a Cactus Bowl invite in the likely event No. 7 Arizona and No. 2 Oregon, which meet for the conference championship Saturday at Levi’s Stadium in Santa Clara, CA., finish in the top 12 of the CFP rankings.

In the new set-up for major college football’s bowl season, 12 schools will be selected for a “Big Six” New Year’s Day bowl game (Rose, Sugar, Peach, Fiesta, Orange and Cotton), including four semifinalists for the first big-school playoffs. This year, the Rose and Sugar bowls serve as the semifinal sites, which will rotate among the four other bowls in the future.

With the Ducks and Wildcats among the final 12, the remaining six eligible Pac-12 teams would go to six lesser bowls whose order is mostly fixed. Assuming a Ducks’ win Saturday, the likeliest order looks like this:

With the final Pac-12 slot in the Cactus, the Huskies and their opponent each get a $3.35 million payout.

In the scenario in which Arizona loses to Oregon in the Pac-12 title game Friday night and also drops out of the top 12 in the CFP rankings, the Wildcats would be out of a “Big Six” bowl, bumping down each team a spot. In that case, the Huskies would fall outside the Pac-12’s automatic postseason berths and likely go to the Armed Forces Bowl in Fort Worth, TX., also Jan. 2, according to a Seattle Times report.

At 4-5, the Huskies have the worst conference record of any bowl-eligible Pac-12 team. The mark is significant because  the Pac-12 created agreements that say the Sun Bowl (fifth selection), Las Vegas Bowl (sixth) and Cactus Bowl must select teams in the order of conference finish, according to Jon Wilner of the San Jose Mercury News. For instance, the Huskies can’t be selected for Las Vegas because they are behind Utah and Stanford, both 5-4.

The Phoenix area’s other big bowl, the Fiesta, also lost its sponsor, Tostitos, after an 18-year run.

After the win over the Cougars, UW coach Chris Petersen expressed gratitude that he gets to play another game with a team that arguably peaked at the end of the year.

“I think the last few weeks, these guys have really been figuring out how to practice, but too, how to get themselves ready for the game,” Petersen said.

UW coaches will spend the next two weeks recruiting while players get some time off. Each bowl eligible team is allotted a maximum of 15 practices.

“I’m just glad that we get a chance to play again with these guys and give them a little time off and get a chance to get after school a little bit and finish that,” Petersen said. “Get ’em healed up, and get ’em prepared for a real good bowl team that we’ll play.”

At this point, UW’s opponent is unclear. The Big 12 Conference’s fifth-place team is tied to the Cactus Bowl. But among the conference’s 10 schools, only six have the minimum six wins required for bowl eligibility entering this weekend’s games. No. 3 TCU and No. 6 Baylor look destined for a spot in a Big Six bowl Jan 1.

The Armed Forces Bowl is fitting trying to lure 9-3 Air Force, according to The Denver Post, after Army failed to fill an expected spot in the game because of a 4-7 mark.

Washington senior WR Kasen Williams will play in the East-West Shrine Game Jan. 17, 2015 in St. Petersburg, FL.  Williams, 6-2 and 216 pounds, struggled this season during a return from leg injuries. He had 15 receptions for 116 yards . . . senior NT Danny Shelton  has accepted an invitation to play in the Senior Bowl Jan. 24 in Mobile, AL. . . .  Shelton was selected for the Pac-12’s All-Academic first team,  the third year in a row he was so honored.  LB Hau’oli Kikaha joined him for the second time. Sophomore OL  Jake Eldrencamp was a first-team selection for the first team.