The Mariners are committing $57 million to Nelson Cruz over the next four years, but Cruz has never been a great hitter within the AL West. That has to change. 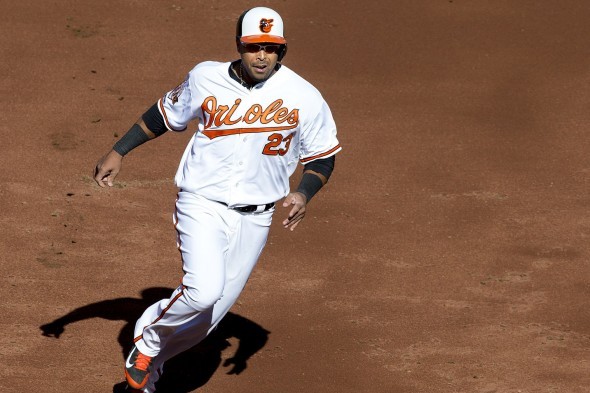 Nelson Cruz is coming off a 40-homer season, but has always had trouble hitting in most AL West ballparks. / Wiki Commons

A little more than a year ago, the Mariners had a contract in place with Nelson Cruz that would have paid the Texas free agent $7.5 million in 2014 with a club option of roughly $9 million in 2015. But apparently concerned that Cruz wouldn’t respond well after he was ensnared in the Biogenesis scandal, ownership turned skittish and finally backed out of the deal. Many teams shared that sentiment, Baltimore an exception.

Cruz returned from an embarrassing 50-game exile and hit 40 home runs (tops in the majors) and knocked in 108 runs for the Orioles. While a post-PEDs Cruz finished seventh in American League MVP voting and made the playoffs, the Mariners flailed at the cleanup spot, which would have been Cruz’s had he signed with Seattle, and missed a wild card spot by one game.

In case you forgot, both 2014 World Series participants, the San Francisco Giants and Kansas City Royals, were wild card teams.

Now, as far as the Mariners are concerned, Cruz’s 40 home runs from the right side of the plate last season make his suspension ancient history. But instead of landing the slugger for $7.5 million on a one-year deal in 2014 plus $9 million this year, the Mariners will have to pay the 34-year-old $57 million over the next four years to hit in the No. 4 slot, between Robinson Cano and Kyle Seager.

With Cano at $24 million per, Seager at $14.25 million under his new $100 million extension formally announced Tuesday, and Cruz at $14.25 million once he officially inks, this means the Mariners will pay an average of $52.5 million per year over the next four to their 3-4-5 hitters – by far the most money committed to three players on one Seattle roster.

Although the Mariners now have three $100 million position players, they can afford the hit.

What they can’t afford is to lead the AL again in ERA but tie for 11th in runs and finish last in OPS, that dismal circumstance partially the result of the appalling performances of their DHs/No. 4 hitters. With Corey Hart and Kendrys Morales getting most of those at-bats last year, Seattle had the worst production in the league with a .190/.266/.301 slash line and just 15 home runs and 50 RBIs.

Citing concerns over its four-year length, critics point out that Cruz will be 39 years old when the deal comes to an end, suggesting that the Mariners will way overpay for Cruz down the road. But the club isn’t — and shouldn’t be — concerned with the distant future.

The Mariners need to win now and are investing $57 million in Cruz precisely because of those 40 home runs, 108 RBIs, plus the fact that he’s a power hitter from the right side and addresses one of the team’s biggest needs.

That’s pretty bleak. Cruz hit a less-than-robust .173 combined against the five AL West teams last season, failed to homer against the Angels and Athletics (12 games) and had his  only success against the Astros. In six games at Safeco Field, not a large sample size, he batted .150 with a slugging percentage of .350 and an OPS of .670. As the chart shows, he was worse across the board against Oakland.

Cruz has generated decent career numbers at Rangers Ballpark, his former haunt, and at Minute Maid Park in Houston, but his numbers in AL West venues are terrible when contrasted with his overall career production. These are the five ballparks where Cruz has had the least success, minimum 30 games:

His favorite among those three AL West parks is Safeco Field, where he’s a .234 career hitter. But a .234 batting average and .749 OPS at Safeco for a cleanup hitter is not going to get it done if the Mariners hope to goose their offense appreciably.

No one expects Cruz to replicate his 2014 numbers next season. But he still needs a huge uptick in production within the division.

If the Mariners were overly concerned about Cruz’s historical performance vs. the AL West they wouldn’t have committed $57 million to land him. But desperation is a powerful emotion.

Even after signing Cruz, the Mariners still need another quality bat.