Ten-year veteran J.A. Happ, a 32-year-old lefty, is expected to slide into the Mariners’ rotation next season, but he can also come out of the bullpen. 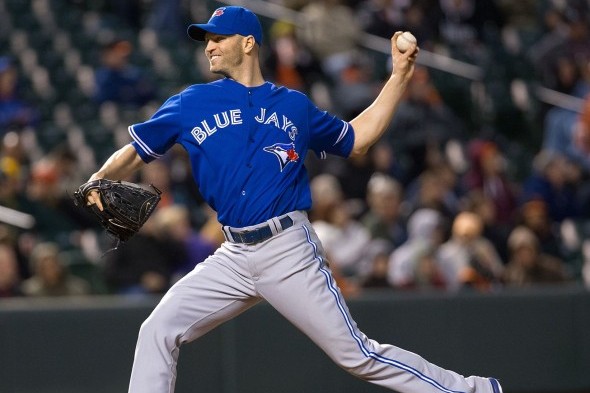 J.A. Happ, who spent the last three seasons with the Toronto Blue Jays, can start or come out of the bullpen. / Wiki Commons

The Mariners Wednesday traded outfielder Michael Saunders to Toronto for left-handed pitcher J.A. Happ, who went 11-11 with a 4.22 ERA in 28 starts last season. Happ, who spent the past three seasons with the Blue Jays after previous stints with the Philadelphia Phillies and Houston Astros, should provide rotation depth for a Seattle team trying to position itself for a playoff run.

A native of Evanston, IL., the 32-year-old Happ was selected by Philadelphia in the third round of the 2004 amateur draft. He made his major league debut June 30, 2007 and pitched for the Phillies through mid-2010, when he was sent to the Astros in a July 29 deal that included Roy Oswalt. After three years in Houston, Happ went to Toronto in a July  2012 trade.

Happ can start or come out of the bullpen. He would be especially valuable if the Mariners, who acquired slugger Nelson Cruz Tuesday, trade some of their younger pitching in exchange for another outfield bat.

Happ is under contract through the 2015 season after signing a two-year extension with the Blue Jays last season. Happ’s contract contains a team option worth $6.7 million.

The Mariners have been seeking to trade Saunders, who turned 28 last month, since the end of the season after Saunders took exception to remarks by Zduriencik, who, in radio interviews, criticized Saunders for not doing more to get into the type of physical shape that would allow him to play a full season.

Drafted by the Mariners in the 11th round of the 2004 amateur draft, Saunders never played more than 139 games in any year since his debut July 29, 2009. Last year, Saunders saw action in 78 games, batting .273 with eight home runs and 34 RBIs. He had two stints on the disabled list.

When the season ended, Zduriencik suggested that Saunders didn’t do enough to keep himself in top condition and that he could have spent more time in the weight room. That drew a strong retort from Saunders’ agent, Mike McCann.

“It was shocking to hear that,” McCann said. “Michael was never told that there is something that needed to be changed. If there was, Michael Saunders would do it. These comments don’t reflect Michael Saunders’ work habits. They imply that he’s lackadaisical.”