Thiel: In Cruz, Mariners get an ‘aircraft carrier’

Nelson Cruz is thinks DH is “boring,” but that will be his main job as the Mariners assemble an offense that pitchers won’t be ashamed to take out in public. 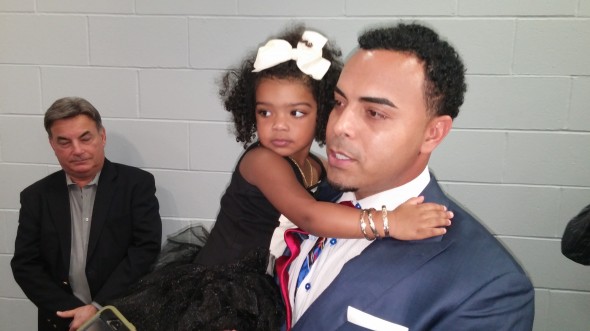 Why did you take PEDs supplied by Biogenesis that caused your 50-game suspension in 2013? “I lost 40 pounds during the (2012) off-season. I went to doctors who don’t find what is going on with me. I keep losing weight. Finally, they found it was parasites. Spring training was close. That’s why I went to Biogenesis.”

Besides the big money, why sign with the Mariners? “(Robinson Cano) was huge. Robby calls me, tells me about Lloyd (McClendon) and how great a manager he was. Overall, I think I know everything about the team.”

What is your preferred role with the Mariners? “DHing is boring,” Cruz said, but with a slight laugh.

There you have it: Two dramas explained, and one to play out.

Cruz is one of about two or three dozen players left in Major League Baseball who can hit the ball hard and fairly often. The game is about pitching, pitching and more pitching. The Mariners can pitch, but they plan on winning big in 2015, so they paid massive treasure ($58 million guaranteed over four years) to get one of the two or three dozen, who will be 39 at the contract’s expiration — and even though he’s a dubious fielder and a career .234 hitter at at spacious, chilly Safeco Field, a.k.a. The Career Graveyard for Right-Handed Hitters.

Then again: Sitting still was the poorer option. Especially when the Mariners were a game removed from the postseason in 2014.

GM Jack Zduriencik, the swashbuckler who made the deal, explained it with an analogy from his days in Milwaukee, where Al McGuire cut a massive, amusing swath as basketball coach at Marquette University.

“Al used to say, ‘Every year I gotta go get an aircraft carrier,” said Zduriencik said, smiling, of seven-foot centers. “We’re pretty good (already). Is (Cruz) an aircraft carrier? Look at our club the last four, five, six years — he’s as close as we’ve had.”

In a game played primarily by zodiac boats (see Kansas City Royals and San Francisco Giants, World Series 2014), an aircraft carrier ups the advantage. Particularly since the Mariners over the past decade have had the worst production in baseball at DH, the aircraft carrier position.

That included last year, when Corey Hart, Kendrys Morales and assorted passers-by combined to hit .190, not a lot more than the cumulative batting average of National League pitchers.

And that’s where Cruz will spend most of his time, boring as it may be, because he’s something of a danger to himself and others in the outfield.

“I don’t like to be the DH,” Cruz told reporters at his first Seattle press conference. “But I understand the role. I understand that I’m here to play and contribute in whatever that role might be. I’m here to help. Lloyd makes the call.”

Cruz’s reluctance conjures an image of him showing up at the manager’s door every day, glove in hand, smiling. Then, more than half the time, walking away with a pout.

“This will be something that Nelson and I will sit down and talk about,” McClendon said. “Believe me, we’ll come to a conclusion where he will be comfortable with the game plan, and what we will try to do to make sure he’s stays healthy and be a productive player throughout the year. We’ll figure it out.”

Of course, the Mariners tried to figure out a similar balance of play and health with OF Michael Saunders, and never did. So Saunders Tuesday found himself traded to Toronto, even though he could play a good right field.

But now is not the time for definitive judgments on the 2015 Mariners roster. Baseball’s annual GM meetings are next week, and Zduriencik made it plain he’s not done dealing. Cruz was actually the easy part. All he cost was money and the Mariners’ first round draft pick in 2015. Now he’s probably into trading prospects for proven players, something that sends shivers through longtime Mariners fans.

Zduriencik contends the heaviest lift was a year ago, when he stunned baseball by outbidding the Yankees for Cano. That $240 million, 10-year investment paid a dividend this week that had nothing to do with hitting or fielding. And it may pay again in the coming days.

“The Cano commitment was huge, but we’re here today because of that commitment, talking about Cruz and (Kyle Seager, who Wednesday signed a $100 million, seven-year extension),” he said.  “The Cano signing was a statement by the organization.

“When I first sat down with Robby, it was apparent to me he was our biggest cheerleader. He enjoys Seattle, loves playing here, and told me, ‘I’ll pick up the phone whenever I can to make us better.’ He’s the kind of guy who people gravitate to.”

Cano’s arrival did chase away a number of cooties from the Mariners’ national image, which contained equal parts incompetence and dysfunction that has kept the franchise out of the World Series since the franchise’s 1977 birth. Now that Cano helped talk Cruz, a fellow Dominican, out of Baltimore’s Camden Yards where the livin’ was easy.

Zduriencik made the point that when the money is relatively comparable, hitters don’t look at ballpark effects as much as sabermetricians and writers.

“Hitters look at the lineup as much as they look at the ballpark,” he said. “They l0ok at who’s around them. What comes out in our talks with (players’ agents) is, ‘We think you guys have a chance to win.’ It carries the day.”

If you buy the premise that in baseball, local and national revenue increases have made stupendous salaries secondary and semi-irrelevant, buying aircraft carriers becomes simple. The credibility that comes along with the purchase apparently is free.