Eagles running backs LeSean McCoy and Darren Sproles pace a Philadelphia offense that has one speed, thanks to coach Chip Kelly. 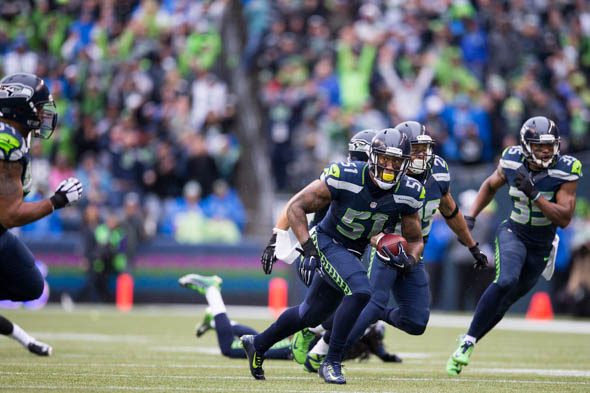 A swarming Seahawks defense faces what could be its toughest test of the season Sunday in Philadelphia. / Drew McKenzie, Sportspress Northwest

“We didn’t get in a defensive huddle the whole training camp, knowing that there are teams we’d have to be ready for,” Quinn said Thursday. “Not necessarily just Philadelphia, but teams that we are going to play this year.”

Preparation for defending against a fast pace actually began in OTA’s, according to Quinn. Through three quarters of the regular season, it’s proven effective. Facing the Green Bay Packers in the opener, the Seahawks held in check QB Aaron Rodgers, a frontrunner for NFL MVP, in a 36-16 win. In Week 3, Seattle topped the Denver Broncos’ no-huddle scheme led by QB Peyton Manning, 26-20 in overtime, a little more than seven months after blowing out the Broncos in Super Bowl XLVIII.

But Seattle’s defense, ranked third in the NFL in points allowed  (18.4 per game), will receive perhaps the greatest test of endurance when it squares off with the 9-3 Philadelphia Eagles on Sunday at Lincoln Financial Field (1:25 p.m. PT, FOX).

“We’ve been in the no-huddle defensive mode for so long that we’re familiar with how this goes,” Carroll said. “We’re not concerned about that, really. We practice like that all the time.”

Perhaps SS Kam Chancellor described best the way to stop Chip Kelly’s attack. The coach implemented it to near perfection at Oregon before making the jump to the NFL.

“Know your fits, and make your hits,” Chancellor said.

Seattle will need to at least slow down Philadelphia RB LeSean McCoy, the league’s third-leading rusher with 1,018 yards. An explosive, shifty runner, McCoy has drawn comparisons to Kansas City RB Jamaal Charles for his ability to cut back and bounce a run to the outside. It was Charles who torched the Seahawks for 159 rushing yards and two touchdowns on 20 carries in Seattle’s Nov. 16 loss to the Chiefs at Arrowhead Stadium.

The Eagles; No. 2 running back is a similarly-fleet footed Darren Sproles.

“You’re going to see some shaking and baking from those guys in this game,” Carroll said of McCoy and Sproles.

Along with WR Jeremy Maclin, the pair pose perhaps the biggest threat to disrupting a Seahawks defense that has allowed a combined six points in the past two games after MLB Bobby Wagner returned from a foot injury. SS Kam Chancellor in recent weeks also appears closer to 100 percent after offseason hip surgery and assorted injuries plagued much of his season.

In turn, the Seahawks, after a 3-3 start, have won five of their last six to improve to 8-4 with four games left in the regular season. They trail the fading Cardinals by one game in the NFC West, with a Dec. 21 matchup looming against Arizona at University of Phoenix Stadium. That could potentially decide the division champion.

First, they must hold down Kelly’s offense.

CB Jeremy Lane (glute) and tight end Cooper Helfet (ankle) didn’t participate in Thursday’s soggy, cold outdoor practice . . . DE/DT Michael Bennett was also held out, though he’s often sat out practices because of a bothersome toe this season and has yet to miss a game . . .  C Max Unger (ankle/knee) didn’t practice and isn’t expected back until the Dec. 14 game against San Francisco, at the earliest . . . Limited Thursday were Byron Maxwell (shin) and Marshawn Lynch (back).