Seahawks’ win in Philly would be historic

The Seahawks, who play at 9-3 Philadelphia Sunday, have won only one game in franchise history in Week 14 or later against a winning team in the Eastern time zone. 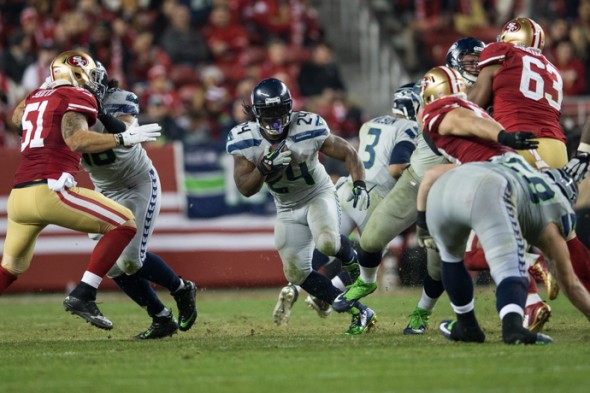 Since the 8-4 Seahawks are playing at 9-3 Philadelphia Sunday, this question arose: When was the last time that the Seahawks, playing in Week 14 or later, won a regular-season game in the Eastern time zone against an opponent with a winning record? Answer: 11 years, 11 months and 20 days ago, and the Seahawks required overtime to get the job done.

Coached by Mike Holmgren, they were in Atlanta Dec. 15, 2002, to face the 8-4-1 Falcons, led by Michael Vick, whose 12-yard touchdown pass to Trevor Gaylor with 21 seconds remaining forced the extra session.

Atlanta got first crack in OT and had victory in sight when Jay Feely lined up for a 36-yard field goal. But he inexplicably shanked it, giving the Seahawks an opportunity. On the seventh play of their drive, Shaun Alexander burst for a 27-yard touchdown and the Seahawks left town with a 30-24 win.

That’s not only the last time the Seahawks won in Week 14 or later in the East against an opponent with a winning record, it’s the only time in franchise history. Keep that in mind when the Seahawks and Eagles tee it up Sunday.

“This is really an exciting week — a big trip for us going against a terrific team,” said coach Pete Carroll. “I feel good about the challenge and am looking forward to it.”

Even with expanded parameters, mainly by eliminating the time zone constraint, Seahawks’ road victories this time of year  — anywhere — are relatively rare. Since 1976, they have won 27 times on foreign soil in Week 14 or later. But only 11 of those came against teams with winning records at the time of the game. The 11 victories (opponents that made the playoffs are listed in bold):

While a win by the Seahawks Sunday in Philly wouldn’t be one of a kind, it will be two of a kind if the Eagles, who currently own the NFC’s No. 3 seed, reach the playoffs.

The Seahawks have won their last two at Franklin Financial Field and the Eagles aren’t much of a favorite – a mere point – but they have won 10 consecutive at home (6-0 this season) and are 3-1 in Mark Sanchez’s starts at quarterback. In those games, the Eagles, who feature the NFL’s No. 4-ranked offense, have outscored their opponents by an average of 40-18.

It’s not surprising that RB DeMarco Murray of Dallas, who has 11 100-yard games, leads the NFL in explosive running plays – 41 that have gone for 10 or more yards, including 13 that he broke for 20 or more.

It’s more surprising that Justin Forsett, the former Seahawk now playing for Baltimore, ranks second with 35, considering that he only got a chance to start after the Ravens threw Ray Rice, now trying to talk his way back into the league, under the bus.

Russell Wilson ranks third with 28 explosive plays – in 91 attempts. His percentage of such runs – 30.7 – easily leads the NFL.

Wilson is the only quarterback ranked among the top 10 and has more such plays than Marshawn Lynch (27), Green Bay’s Eddie Lacy (27), Pittsburgh’s Le’Von Bell (27) and Philadelphia’s LeSean McCoy (26), whom the Seahawks will see Sunday. Players with 25 or more explosive runs:

With 28, Wilson has more explosive plays than the next two quarterbacks – Jacksonville’s Blake Bortles (11) and San Francisco’s Colin Kaepernick (10) – have combined. No quarterback has had more explosive runs than Wilson since Vick’s 44 in 2006.