No surprises with Lynch in MikeRob interview

Ex-Seahawks FB Michael Robinson’s interview with Marshawn Lynch didn’t amount to much more than a conversation between friends. 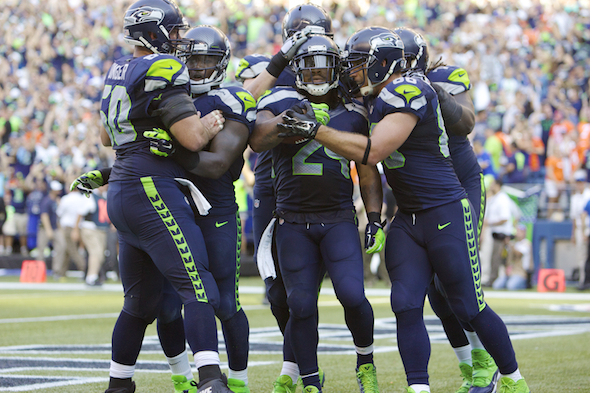 Michael Robinson has a future as a broadcaster, but he’s not going to make it to 60 Minutes anytime soon. The former Seahawks fullback’s interview with Marshawn Lynch, broadcast on the NFL Network house organ Sunday morning, offered little that followers of the rarely forthcoming Seahawks star didn’t know.

Robinson was probably Lynch’s closest friend on the team and the interview was more a conversation between pals. The league released about three minutes of the interview recorded Saturday in Philadelphia, where the Seahawks play the Eagles at 1:25 p.m. Sunday.

Asked about reports he might retire after the season, Lynch said, “I’m still under contract. I ain’t even made it through this year. I’m chasing after another one of these (points to Robinson’s Super Bowl ring) right here.”

Asked about his reluctance to talk with reporters either pre- or post-game, which cost him a $100,000 fine from the NFL because it is a contractual obligation, Lynch said, “I ain’t got nothing to say. All that is superficial to me. I just like to play football. Anytime I get the opportunity to touch the ball, I feel I can be successful.”

Asked about whether his relationship with media might affect his chances for the Hall of Fame, which is a media vote, Lynch said, “You know who votes for that. They don’t seem to . . . see eye to eye with me — which is cool. And if I’m not, (expletive), I’ll still live.”

Regarding his relationship with fans, he said, “When people come up to me and they say, ‘What’s up?’ they get a real, genuine ‘What’s happening?’ Or when I’m at my camp, I’m actually at my camp. I actually get down with the kids in my camp.

“It’s not like I’m going to sit here and talk to the media because I know when [fans] see me in public they’re going to love me. Then I can just give them a wave and then it’s going to be, ‘He waved to me.’ No. All of (the media interviews) is superficial to me.”

Lynch, 28, was asked what he would tell the 20-year-old Lynch if he could.

“I would tell him don’t regret decisions you make, from the bad to the good to pretty to ugly,” Lynch said. “I’d tell him, ‘Get ready for a whirlwind because it’s not going to be pretty.’ ”

A version of the interview sent to beat reporters Saturday had an additional comment edited out of the broadcast: “But if you stay true and focused to yourself, then whatever is going on around you won’t mean (expletive).”

Lynch is booked make $7 million next season and count $8.5 million against the salary cap in the final of a four-year deal. He has rushed for 956 yards this season, fifth best in the NFL.

For what it’s worth, the video interview is here.