The Seahawks recorded their best defensive performance since the Super Bowl in stuffing the Philadelphia Eagles Sunday afternoon. 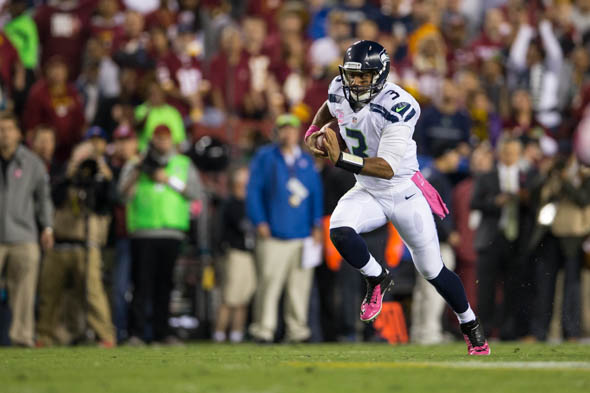 In their best defensive performance since Super Bowl XLVIII, with 20 players making tackles, the Seahawks suffocated coach Chip Kelly’s up-tempo Philadelphia Eagles at Franklin Financial Field Sunday. The 24-14 victory was considerably more lopsided than the score. Winning its third in a row, Seattle improved to 9-4 and remains a game behind Arizona in the NFC West after the Cardinals (10-3) edged Kansas City Sunday.

The Eagles entered with the NFL’s fourth-ranked offense, averaging 416 yards per game, but the Seahawks held them to 139, the lowest produced by a Kelly-coached team, in the NFL or at the University of Oregon. No Eagles team of Kelly’s had been held under 200 yards.

The Seahawks, who started 3-3 and have gone 6-1 since, refused to allow Philadelphia to get going, holding the Eagles to 45 offensive plays, 28 below their season-average of 73. As a consequence, Seattle held an almost absurd 41:56 to 18:04 edge in time of possession. That time of possession was a franchise record, breaking the mark of 41:35 against San Diego in 1987.

Had Seattle punter Jon Ryan not bobbled and lost a snap at his 19-yard line in the first quarter, setting up Philadelphia’s first touchdown, the game might have become as much of a rout on the scoreboard as it was statistically.

“I don’t know how that happened,” head coach Pete Carroll said Ryan’s bobble. “He’s caught a million footballs, so it probably won’t happen again for a million years. So we’re good to go.”

Other than the TD, the Seahawks paid no long-term penalty for Ryan’s miscue. They had a 440-139 edge in total yards, made eight plays that went for 20 or more yards to Philadelphia’s one, and converted seven third downs, including 3rd-and-13 once and 3rd-and-15 twice. By extending drive after drive, the Seahawks prevented the Eagles from getting their usual avalanche of offensive chances.

Russell Wilson threw two touchdown passes, 15 yards to Marshawn Lynch and 23 to Doug Baldwin, and bedeviled the Eagles with a read-option, 26-yard touchdown. Although he completed only 22 of 37 for 263 yards (he threw away several passes under extreme pressure), he came up big numerous times.

After the Eagles took a 7-0 lead (first TD surrendered by Seattle since Nov. 16 at Kansas City), Wilson directed a 10-play, 82-yard drive that would have come to naught if he hadn’t completed a first-down throw to Baldwin on 2nd-and-24. Wilson’s 26-yard run ended that drive and tied the game 7-7.

Just before halftime, after the Seahawks forced a punt, Wilson completed a 20-yard throw to Baldwin on 3rd and 13 and a 20-yarder to rookie Paul Richardson on 3rd-and-15, setting up a 44-yard field goal by Steven Hauschka that gave Seattle a 10-7 halftime lead.

After Earl Thomas recovered a LeSean McCoy fumble early in the third, Wilson coerced the entire Eagles defense to shift to the right side of the field, then threw back left a 15-yard, backdoor TD to a wide-open Marshawn Lynch for a 17-7 lead.

After the Eagles pulled to within 17-14 on a 35-yard TD pass from Mark Sanchez to Zach Ertz, Philadelphia’s only play of more than 20 yards, Wilson and FB Will Tukuafu teamed on a third-down conversion that set up Wilson’s 23-yard touchdown to Baldwin.

Wilson completed passes to 10 receivers, including five balls to Baldwin for 97 yards and three for 37 yards to Jermaine Kearse, who made a great, lay-out catch in the third quarter. It didn’t lead to a touchdown, but it had the desired effect of extending a drive and keeping the Eagles offense off the field.

“It was a great effort all across the board,” said safety Kam Chancellor. “We just did a great job. We were sound, disciplined and made tackles. Overall, we were jut having fun as a team.”

Lynch, who took the Seahawks out of a scoring opportunity in the fourth quarter with his first fumble of the season, ran for 86 yards and surpassed 1,000 yards for the fourth consecutive year.

McCoy, who ran for 289 yards in his two previous games, was held to 50 on 17 carries, with a long gain of 10. His story summed up Philadelphia’s day.

Lynch’s 86 rushing yards give him 1,042 for the season. Lynch has 52 TDs (rushing and receiving) since 2011 . . . Wilson finished with a 99.3 passer rating. He was sacked twice and has been taken down 13 times in the last three games. Wilson has a 12-1 TD/INT ratio on the road this season . . . The Seahawks have won 29 of their past 37 regular-season games and 12 of their last 17 on the road. They have also won three in a row at Franklin Financial Field. The Seahawks are 4-3 on road this season . . . The Seahawks suffered two injuries, to DE Demarcus Dobbs (sprained ankle) and Tharold Simon (dislocated finger), but neither were considered serious.