A burst of quality throws amid good pass protection Sunday gave Seahawks coach Pete Carroll a glimpse of what the offense could be like down the stretch. 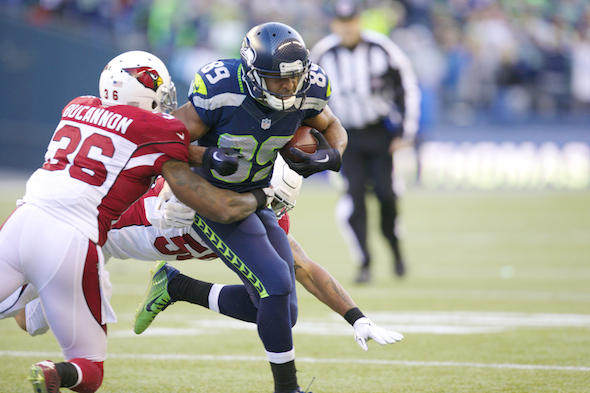 As much praise and fear (depending upon your perspective) as is being heaped upon the Seahawks defense for dismantling Chip Kelly’s heralded offense Sunday in Philadelphia, there were moments in the second half for the offense that prompted some small yippees from coach Pete Carroll.

“I thought the second half was a terrific illustration of what we can be like,” he said at his Monday debriefing at Seahawks HQ in Renton. “I think we’re playing better in all areas.”

Since the shocker of the Percy Harvin trade Oct. 17, the Seahawks’ offense has bounced among descriptions such as injured, conservative and tentative, sometimes all at once. Even in the past three games that have relaunched the Seahawks’ swagger, the offense has averaged a modest 20.5 points a game as it stalls out frequently in the red zone.

But the Seahawks’ opening two possessions of the third quarter offered a glimpse of some possibilities, especially for a balky passing game.

The offense received a gift from the defense when LB K.J. Wright stripped Eagles RB LeSean McCoy of the ball, giving the Seahawks a first down at the Philly 19. After a four-yard run by RB Marshawn Lynch, a play-action fake to Lynch drew the defense to him while Wilson rolled right. Panicking at the sight of a free-range Wilson, most defenders flew after him, leaving Lynch alone in the flat. The throwback lob was so easy and open the Philly groans were audible through the TV. Red zone touchdown.

The next possession started with bad field position, at the Seattle 9. After a 12-yard scramble by Wilson netted a first down, he took a shot. WR Doug Baldwin took off on a fly route and Wilson, with good protection, heaved it 44 yards. It was incomplete, but Baldwin slyly slid into the path of CB Bradley Fletcher, drawing a massive pass-interference penalty.

Wilson had two more short completions before Baldwin, spotting a blitz that would leave him in man coverage, ran a seam route. Again with good protection in the pocket, Wilson  dropped a perfect dime on Baldwin entering the end zone.

For the two possessions, that adds up to 4-for-4 passing, one defensive penalty and two TDs. Fairly efficient.

Wilson then completed five of his next seven attempts, missing on only deep shots to Jermaine Kearse and rookie Paul Richardson.

The idea of Wilson getting production from a well-made pocket for mid-to long-range passes would just about complete the transformation that began after the Harvin trade disrupted the playbook.

“We’ve been in transition for a while,” Carroll said. “We had a big change early in the year. Coming out of that, we had to get right again. But I know Russell is feeling great about working with Doug and Jermaine and now he’s working (TE Tony Moeaki) into it.

“Russell is just one guy. He doesn’t do it all; he just does what he’s supposed to do. It’s everybody working together. We saw things we were just trying to clean up, zero in on things we wanted to do with him and with the receivers.”

For most of three years, Wilson’s ability to escape pressure and extend plays is a huge asset. But he will get caught deep occasionally, as well as get clobbered between the tackles. So for a long playoff run, Wilson has to develop a passing threat without Harvin, Golden Tate (lost in free agency) and TE Zach Miller (injured), as well as reliable pass blocker FB Derrick Coleman.

Some of the workaround was visible Sunday.

“The protection worked well with what we were doing route-wise,” Carroll said, “and Russell had a chance to really hold tough in the pocket, see things, and really get a great look at stuff.

“He had to run around a lot early, but we cleaned things up during the course of the game and I thought it was us looking very efficient. Hopefully we can kind of stay with that.”

Coupled with the growth of rookie WRs Richardson and Kevin Norwood, the Seahawks have a shot at a more complete attack.

“Russell’s been singing their praises for a long time,” Carroll said of the rookies. lvov.natashaescort.com “He’s said, ‘Hey, these are the kind of guys that I get to grow up with.’ It was exciting to see that.”

DE Demarcus Dobbs has a “legit” sprained ankle that will rob the D-line of depth again for Sunday’s home game against the 49ers, Carroll said. The only other injury from Sunday, CB Tharold Simon’s dislocated finger, won’t keep him out . . . TE Cooper Helfet and C Max Unger, both recovering from sprained ankles, will attempt to practice this week, with Helfet closer to getting back . . . Carroll expects that CB Jeremy Lane (glute) will be ready.