An open letter to the coach of the San Francisco 49ers. He can’t leave. He just can’t. Please. By all that is righteous and good in football in America, he cannot abandon us. 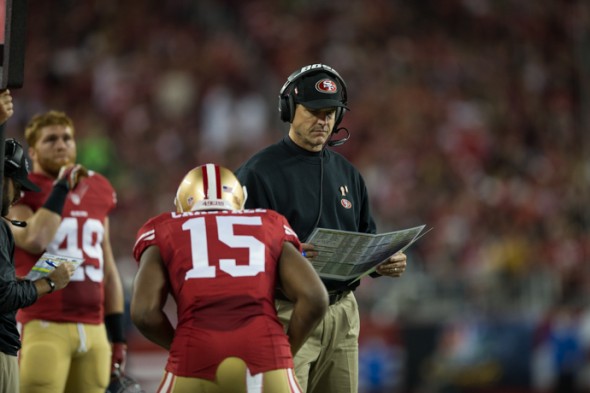 For the sake of much that is enjoyable about football with you as Santa Clara 49ers coach, please do not leave your post. I mean this so sincerely that, even as a Seattle sports columnist, I would campaign for a Seahawks loss Sunday if it meant keeping you at your station. I would appreciate a small consideration if I helped you get a raise, only to cover expenses getting my car and clothes cleaned after the 12s are done with me.

But truth be told, many 12s would miss you too. The cheap rationale is that your retention would continue to roil the 49ers as the franchise falls further into disarray, which as you might imagine amuses many in my part of the amber waves of grain.

I mean, losing to the Raiders Sunday as the Seahawks shut down Duck Dynasty in Philly has provoked a hardy-har-har so profound around here that it has filled Harborview Hospital’s emergency room with all manner of pulled rib muscles, back spasms and forehead gashes from fans tumbling with laughter into coffee-table corners.

But your current travails are not why you need to stay put. In fact, just the opposite. You are a winner. More than anything else, you are a winner. That is what helps make Seahawks-49ers the best thing going in American pro team sports.

In January, the Seahawks and 49ers played the most magnificent football game I have seen. As you know well, you were a foot away from going to the Super Bowl, which only adds another thick layer of regrets, recriminations and bitterness between the teams.

In all of Seattle’s geographically isolated sports history, it has never had a more intense rival.

People used to get fired up for college ball here, Huskies-Ducks or Huskies-Cougars, but lopsidedness sucks the life out of rivalry. There was a time in the 1960s when Portland and Seattle were fired up about minor league hockey, and for a time in the late 1970s, the Sonics and Blazers went at it with elevated play and passion. Portland’s admission to MLS has re-kindled dormant rage with the Sounders, which holds hope.

But besides everyone in Seattle hating Budweiser hydroplane owner Bernie Little, mad-ons were only occasional and ephemeral. But then the 49ers hired you from Stanford, the Seahawks hired Pete Carroll from USC, and you brought your college-baked contempt for one another to the pros.

The semiannual “What’s Your Deal?” Bowl was born. The Seattle version of the  Squared Jaws Clenched Teeth holiday is Sunday.

What we have come to learn is that you are Pete Carroll’s brother in every dysfunctional way that brothers are.

Even though the two of you produce exactly the same kind of football at the highest level — defense-first, run-first, take-your-spread-offense-and-shove-it, manly man ball —  you hate him as the older brother who does everything just a little better. He, in turn, mocks your spittle-spewing fury.

While others coo and fawn over Carroll’s ability to recover from tumult to get the Seahawks on track to defend the Super Bowl title that you would have won as well, but for the extra foot, you are seen as, ahem, eccentric.

But in your pleated-khakis, jive-turkey-gobbler rhetoric, sideline hysteria and constipated, English-as-a-second-language style, you are awkwardly charming, in an Elmer Fudd sort of way.

This week is a perfect set-up for a demonstration of your ferocious intensity that is equal parts asset and liability. The 7-6 49ers have been given up for dead, mocked nationally and locally.

Columnist Tim Kawakami of the San Jose Mercury News asked Raiders owner Mark Davis, whom you met warmly pre-game Sunday, what he said to you.

On Thanksgiving night, in front of a huge national TV audience, dysfunction was in plain sight as the Seahawks crushed the 49ers at home. The owner tweeted an embarrassing apology to fans, the GM’s daughter tweeted that your offensive coordinator should be fired and your quarterback regressed.

On top of all that, NBC post-game set up a turkey dinner celebration and invited Russell Wilson and Richard Sherman to partake and cackle. They did, right on top of the 49ers logo at new-but-also-dysfunctional Levi’s Stadium.

“If (NBC) asked,” he said. “I would have asked if they could do it somewhere else.

“But it meant nothing. Our guys didn’t care at all.”

Of course, the Seahawks didn’t care. But I am sure you cared. As I’m sure you will deny it.

Yet if we were to glimpse your to-do list this week, the box next to “Sophomoric motivational tactic that always works” will be checked.

This sort of whimsy wrapped around fury is what makes this rivalry work. Don’t you dare screw it up by leaving. If the Seahawks have to take a figurative knee Sunday to sustain it, so be it.

But if you must leave because you can’t stand your bosses and they can’t stand you, please take the always-open job in Oakland. Because then I will campaign, once Los Angeles poaches a team and forces NFL realignment, for the Seahawks to return to the AFC West.

Your players may be tired of the act, but we can’t quit on you, big guy.

Yours in khakis forever,