Thiel: Seahawks ‘D’ fleet of mind as well as foot

The still-young Seahawks defense qualifies as experienced now, meaning they know assignments and offenses so well they can go full-throttle without fear. 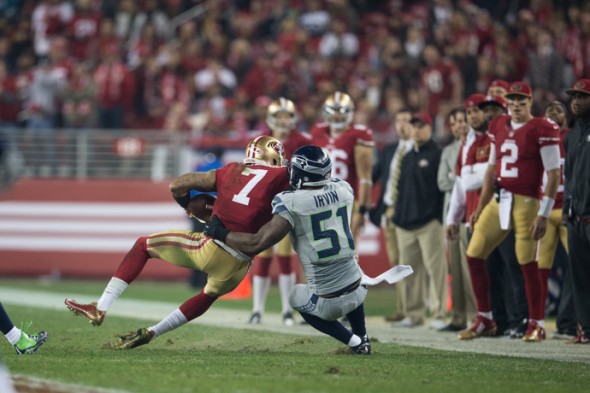 As the Seahawks defense picks up the momentum of a brakes-free logging truck, it is drawing admirers, including RB Frank Gore, longtime hammer of the 49ers offense.

At least I think he said ferp. But I won’t swear to it.

He did, however, seem sincerely impressed.

“They play great together, man, they do,” he said. “I respect that team a lot.”

The most obvious asset in the past three games — in which opponents, one of which was San Francisco, have accumulated 507 yards and 20 points — has been speed. As a group, the Seahawks seem to get to the ball, to the sidelines and to the deep routes faster than any defense in the NFL.

Since speed is the No. 1 asset that coach Pete Carroll seeks in his recruits, that shouldn’t be a real surprise. But swiftness isn’t necessarily confined to the feet. None other than 49ers coach Jim Harbaugh, in his own traditionally painful teleconference,  strung together a coherent thought on the subject.

“They do a fantastic job of diagnosing, running, hitting — they do a tremendous job of playing team defense,” Harbaugh said. “Very well coached, very good at diagnosing. You really have to be at your absolute best offensively.”

The ability to diagnose what’s coming, to recognize the tells or indicators, has caused time to warp a bit. Here’s how Seahawks FS Earl Thomas described it.

“The game is so slow, because we’re moving so fast,” he said. “It’s beautiful out there, man.”

As they were last season, the Seahawks again are atop the NFL defensive stats, partly due to confining the 49ers to 204 yards in the 19-3 win Thanksgiving night at the Field of Jeans in Santa Clara. The teams know each other like brothers, and right now the Seahawks are younger and healthier, and the key guys have been together for awhile.

“We’re an experienced defense — these guys have been around,” Carroll said Wednesday. “They’ve played together a lot. They can communicate on a really high level. They can make sense of things, with a glance or with a word of what to expect.

“That’s a tremendously valuable asset. It allows a team that plays a fairly basic scheme to play really fast. If there is anything that you should have witnessed here in the last month is that our team speed picked up. You can see us playing faster. That’s in the continuity, that’s in the communication, that’s in the confidence from being together.”

The Seahawks were so in tune with what the Eagles would do in Philadelphia Sunday that they never allowed the run game to get established, crushing what some felt was the NFL’s hardest offense to stop. The Eagles had 139 yards, fewest ever for a Chip Kelly-coached team.

Thomas said that the newcomers to the defense now get the scheme, and the experienced holdovers got over themselves in a team meeting prior to the Arizona game.

“We play as one,” he said. “We’re one big unit, thinking the same things — even when we communicate outside of football. The dedication, love and connection is there. We understand how offenses are trying to attack us and it allows us to play super fast. It’s crazy to see how we feed off each other.”

Thomas is so thrilled he nearly giggles in the description.

“How we’re winning is cute,” he said. “I like how we dominate. That’s what I expect we should do. We’re having fun. A bench of kids at recess.”

One consequence of losing to the Seahawks is losing again the next week. That has happened to the past seven teams the Seahawks have defeated. Asked if he was surprised that 2-11 Oakland beat the 49ers 24-13 Sunday, Thomas shook his head.

“No, because we just played (the 49ers),” he said. “I’m not lying. It’s a blueprint. Teams see how (the Seattle defense) takes away a lot of stuff. It’s a copycat league, man.”

The consecutive losses don’t mean the Seahawks necessarily pounded the bejeezus out of the opponent.

“I’m not getting carried away with this thing,” Thomas said. “I’m saying that after we beat a team, (it’s because we know how) that team works. The next team takes the same approach.”

So you gamblers might want to keep an eye on the Eagles and the 3.5 points they’re favored by at home Sunday night against the Dallas Cowboys. Presumably the ‘Boys know things they didn’t know a week earlier.

As for the Seahawks, they know what they know from playing the 49ers two games ago.  Odds are they are a little smarter, and as Gore says, still as fast as ferp.