Seahawks QB Russell Wilson could add another impressive feat to his to his long list of accolades if he rushes for 273 yards over the final three games of the regular season. 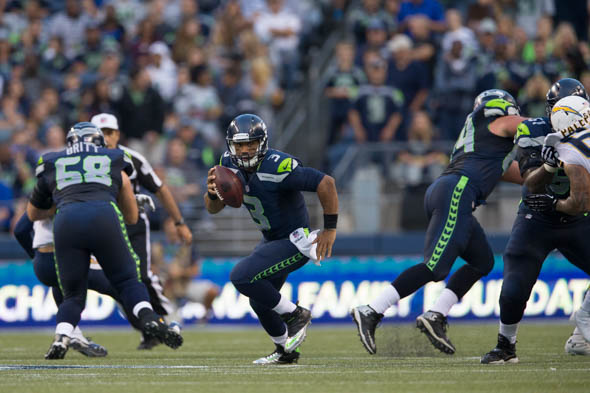 With three games remaining in the regular season, QB Russell Wilson has an outside chance at reaching 1,000 rushing yards. / Drew Sellers, Sportspress Northwest

RENTON — Russell Wilson doesn’t want to be known as a run-first quarterback, but even he admits that notching 1,000 rushing yards in a season would be a weighty accomplishment.

Michael Vick is the only quarterback in NFL history to do it. In 2006, he ran for 1,039 yards with the Atlanta Falcons.

With three games left in the regular season, the third-year NFL quarterback is perhaps a long shot to join Vick in the 1,000-yard rushing club. To do it, he needs to average 91 yards against the 49ers, Cardinals and Rams, all of whom feature above-average defensive fronts.

The feat sounds implausible, but Wilson has already eclipsed the 100-yard rushing mark three times this season, joining Vick as the only quarterback to do it since the 1970 merger.

He is first among quarterbacks with 101 rushing attempts, 727 rushing yards and five rushing touchdowns. He’s averaging a league-best, 7.2 yards per-carry, and he’s 15th among all players in rushing yards.

Wilson will undoubtedly add to that total when the Seahawks (9-4) host the foundering San Francisco 49ers (7-6) Sunday at CenturyLink Field (1:25 PT, FOX).

He reached this point by taking advantage of a mixture of designed runs within the offense and his own improvisation. With RB Marshawn Lynch showing no signs of slowing down, the Seahawks use the zone-read to create space for Wilson on the edge. The naked bootleg, a play in which Wilson drops back and fakes a handoff before rolling out wide and taking off, has been successful this year, too.

“Without saying too much, basically they let me take it whenever I want to,” he said of the bootleg play. “I try to really understand when those situations are and trust my instincts, and trust what the defense is doing and trust their stunts.”

That Wilson has the freedom to make such calls within coordinator Darrell Bevell’s offense isn’t surprising. Since he earned the starting job in 2012, Wilson turned into an art form extending plays and scrambling when the pocket collapses. He led the league in the number of regular-season scrambles in each of his first two seasons.

He’s shifty and rarely takes big hits, mostly because he either slides or runs out-of-bounds before a defensive player can crack him.

“I try to be smart. I try not to take any bad hits,” Wilson said. “A lot of those yards are usually smart yards. I’m not trying to do anything crazy. Jump over any piles or anything.”

But if the situation calls for it, he is willing to take a hit.

In Sunday’s 24-14 win over the Eagles, Wilson ran 10 times for 48 yards, including a 26-yard touchdown run in the second quarter in which he faked a zone-read handoff to Lynch, then ran around LT Russell Okung and untouched into Lincoln Financial Field’s end zone.

“When I watched the touchdown run he had last game, I was thoroughly impressed with his speed around the edge. Of course, he was running against D-linemen,” WR Doug Baldwin said of Wilson. “We always joke with him and talk about how slow he is, but obviously he showed his speed on that play.”

C Max Unger (knee/ankle) was a limited participant in Thursday’s practice. Unger hasn’t played since being carted off the field in a Nov. 16 loss to the Chiefs . . . TE Cooper Helfet (ankle) was also limited Thursday, as was RB Marshawn Lynch (back)… CB Jeremy Lane (glute) was a full participant, but DE Demarcus Dobbs (ankle) was held out after leaving the win over the Eagles… The Seahawks released LB Allen Bradford and signed Bengals practice squad DE David King to the 53-man roster. King was in Cincinnati for parts of the past two seasons after the Eagles selected him in the seventh round of the 2013 draft, but cut him after training camp.