The Seahawks are 10-point picks over San Francisco, but they have struggled before when installed as a double-digit favorite. Remember Tampa Bay last year? 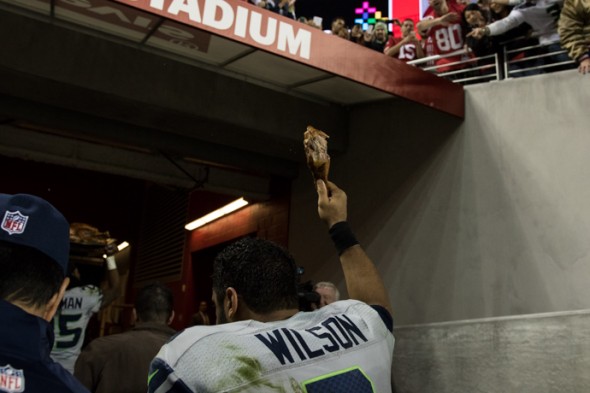 The post-game turkey dinner given Russell Wilson and Richard Sherman by NBC may stick in the craw of the 49ers and their fans. / Drew McKenzie, Sportspress Northwest

With six wins in their past seven after starting 3-3 while weathering injuries, the Percy Harvin debacle and a rash of Marshawn Lynch psychodramas, the Seahawks will become the 11th such team if they win out against San Francisco Sunday, at Arizona Dec. 21 and against the St. Louis Rams Dec. 28 at CenturyLink Field.

According to makers of odds, Sunday’s rematch with the 49ers is expected to be a Seattle stroll, the Seahawks favored by an insulting (to San Francisco) 10 points. Seattle also stifled NFC West leader Arizona 19-3 three weeks ago and should reverse a 28-26 Week 7 loss at St. Louis when the teams engage at the Clink.

Good as are the Rams defensively, Russell Wilson produced the first 300/100 effort in NFL QB history in that meeting with 313 passing yards and another 106 rushing despite taking three sacks.

Then this: In winning three in a row (over 9-3 Arizona, 7-4 San Francisco and 9-3 Philadelphia), the Seahawks have become the first team since the 2010 New England Patriots to produce a three-game winning streak with against teamss with a winning percentage of .600 or above and at least 10 games played.

Impressive stuff. It puts Seattle in line to join the following clubs since 1978 to start 3-3, win at least 12, and capture a division title (Seahawks included for comparison):

No wonder the 12s are optimistic about the final three. But . . . take note that no team on the list won a Super Bowl after starting 3-3 and only three of the 10 reached a conference championship game.

Forever the optimist, Pete Carroll brought a measure of levity this week to Seattle’s situation as it relates to the 49ers.

“They’re very close to being how they need to be at the end of the year,” said Carroll. “Nobody knows how this story is going to be written at this point. We count on them being a very difficult team to play as always. Nothing has changed.”

Actually a lot has changed in the Bay, or at least a lot has heated up since the Seahawks defeated  the 49ers on Thanksgiving: the daily grind of Jim Harbaugh exodus stories; the constant thump about Colin Kaepernick’s regression (hasn’t thrown a fourth-quarter TD all season); the disappearance of TE Vernon Davis (no TDs since Week 1).

The embarrassing 24-13 loss to Oakland last week, seven days after the Raiders were hosed 52-0 by the Rams, make the 49ers seem as dysfunctional as dysfunction gets.

To put a face on it, Kaepernick has so exhausted his supply of good will in the Bay Area that 49ers fans earlier this week torched his No. 7 jersey on Twitter, Instagram and YouTube, making the spate of bonfires the most viewed story on CBS Sports.com three days in a row.

Oddmakers might be right (they usually are) in establishing a 10-point spread. But sometimes they are spectacularly wrong. Only last week, Carolina was a 10½-point underdog to the Saints in New Orleans and won 41-10. Only last year, the Seahawks were a 16½-point pick over 0-7 Tampa Bay at CenturyLink Field and needed the greatest comeback in franchise history to win in overtime.

The 12s should be worried about the 49ers. San Francisco is still officially in the playoff race (motivation No. 1), has dropped two in a row to Seattle (motivation No. 2) and is likely nursing a nasty mad-on after Wilson and Richard Sherman gobbled turkey on the 49ers’ Levi’s Stadium logo during an amusing – but ill-advised – NBC interview following Seattle’s 19-3 win two weeks ago (motivation No. 3).

Also, never underestimate the 49ers on the road. Since Harbaugh became head coach in 2011, no NFL team has won more often away from home than San Francisco:

A few other points:

Corner Richard Sherman put it best this week when he said, “There’s nothing guaranteed in any given week. I don’t care if you’ve beaten a team a bunch of times. The next time, they can beat you bad. That’s the way this league is. That’s why you have to be prepared.”