Rod Belcher, an iconic broadcaster who witnessed some of the most memorable sporting events in Seattle history, died Friday at 94. 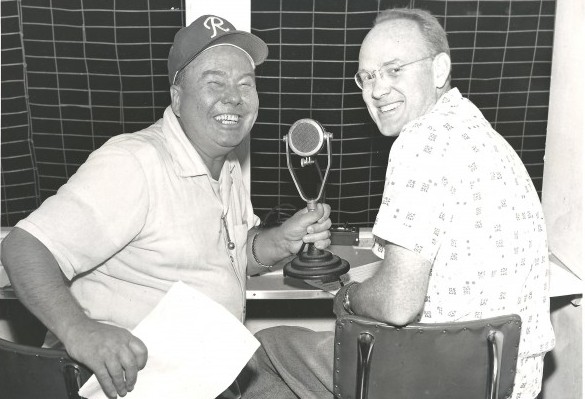 According to Jim Coshow, a former University of Washington basketball letterman (1954-56) and a life-long friend, Belcher was in rehabilitation recovering from a stroke when he passed away.

“He led a remarkable life,” said Coshow, “and will be remembered as the voice on the radio announcing football, basketball, baseball and many other games. He was a fun-loving guy who loved telling stories about the places he worked and the characters he met.”

Belcher, who replaced the legendary Leo Lassen on Seattle Rainiers broadcasts in 1957, also served as radio and television sports director at KING throughout the 1960s, and in 1969 became the voice of the expansion Seattle Pilots. He wrote the popular song, “Go, Go You Pilots,” which became the American League team’s anthem.

Born Nov. 4, 1920, in Berkeley, CA., Belcher was one of two sons of Merton, a banker and businessman, and Janet Belcher of Humboldt County, CA. Belcher spent his first 21 years in California, mostly in the Bay Area. He attended three high schools, in San Francisco and Oakland, graduating at age 16 in 1937.

Belcher enrolled at what is now Humboldt State University, where he became a letter winner in basketball, baseball and track and field, all sports he would later broadcast with distinction. Belcher’s best sport as an athlete was probably basketball, given that he was a three-year starter at point guard and made the All-Far Western Conference team in 1942 when he helped Humboldt State to the first championship in school history.

In addition to participating in athletics, Belcher also involved himself in school drama productions, and worked on the school’s newspaper and yearbook staff.

After beginning his broadcasting career in Missoula, MT., in 1942, Belcher went to work for KMO Radio in Tacoma in 1946, and broadcast Pacific Lutheran, University of Puget Sound and University of Washington sports events, focusing primarily on football, basketball, baseball and track.

From 1949-52, Belcher covered the UW football careers of McElhenny and Heinrich, and in the early 1950s had a front-row seat for Seattle U’s famous O’Brien twins. During their tenure, Belcher did play-by-play of one of the most memorable basketball games in Seattle history — Seattle U’s shocking upset of the Harlem Globetrotters Jan. 21, 1952 at Hec Edmundson Pavilion.

Later that year, Belcher became prominent nationally when he broadcast the Final Four from Hec Edmundson Pavilion. He was also the voice of Seattle U.’s run to the 1958 Final Four, featuring Baylor.

Belcher, who served in the military in World War II, was elected to the Washington State Sports Hall of Fame in 1999.