By defeating San Francisco 17-7, the Seahawks have put themselves in position to claim the NFC’s No. 1 seed, meaning home-field advantage throughout the playoffs. 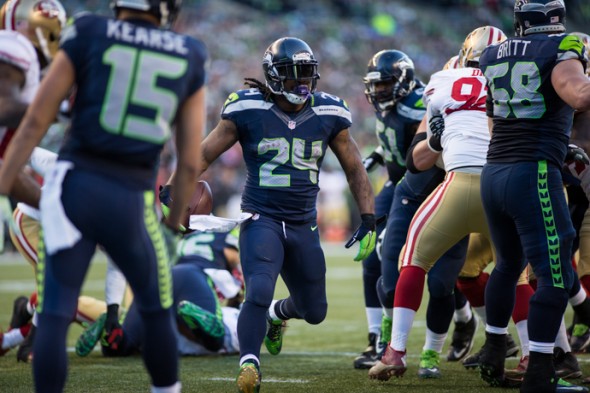 The oddsmakers had it nailed after all, although in tapping the Seahawks to win by 10 points they probably didn’t figure on Seattle blowing two prime scoring chances in the first half and receiving a gift call from the officials in the second. The latter virtually ensured a 17-7 victory Sunday at Century Link Field over San Francisco that eliminated the 7-7 49ers from the postseason.

In winning their fourth in a row, for the seventh time in eight games, and for the fourth consecutive time over lame-duck Jim Harbaugh’s 49ers, the Seahawks (10-4) stayed a game back of Arizona (11-3) in the NFC West, but also positioned themselves, with Green Bay’s loss at Buffalo, to make a run at the conference’s No. 1 seed and home-field advantage throughout the postseason.

“Just a great win over a tough opponent,” said head coach Pete Carroll. “This was not the same team we saw two weeks ago (Seattle won 19-3). They did a lot of new stuff that challenged us on defense early in the game — that was a very good job by their coaches — but we did a good job adjusting and didn’t give up anything in the second half. It was just a great day at the stadium.”

After starting the season 3-3, weathering numerous injuries and the Percy Harvin debacle, the Seahawks are peaking at the right time, especially defensively. They have allowed only 27 points over the past four, including 13 to three division opponents. Offensively, it’s a bit of a different matter.

After the Seahawks received a 38-yard field goal from Steven Hauschka in the first quarter, which was answered by RB Frank Gore’s 10-yard TD run in the second, the Seahawks had an opportunity to take the lead after QB Russell Wilson and WR Jermaine Kearse hooked up on a spectacular 47-yard play to the San Francisco 42.

When the Seahawks reached the San Francisco 30 on runs by Marshawn Lynch, Wilson hit rookie Paul Richardson with an 11-yard pass that set up Seattle with a chance for a touchdown. But rookie RT Justin Britt was flagged for holding, not only removing the opportunity for a TD, but a field goal.

The Seahawks received another scoring chance just before halftime when the Seahawks executed perfectly their two-minute offense. The big play: Wilson’s 35-yard completion to Doug Baldwin to the San Francisco 30. Instead of settling for a field goal with eight seconds remaining, Carroll made the call for one more play. Wilson made an uncharacteristic mistake, throwing an interception to a wide-open Eric Reid, Wilson’s first pick in 138 passing attempts.

“We decided to take one more shot at the end zone and we just made a mistake,” admitted Carroll. “Russell just threw the ball high.”

San Francisco took a 7-3 lead into intermission. Then Lynch began to assert himself. After rushing for only 15 yards in the first half, he dominated an early, third-quarter drive, eventually scoring on a four-yard run that provided a 10-7 lead.

“We were determined to run the ball in the second half,” said Carroll, “and Marshawn did what Marshawn does. He’s a unique football player, an extraordinary player, with a great will and we love what he brings to the team.”

The drive that sealed Seattle’s 10th win occurred early in the fourth and was launched by a 19-yard punt return by Bryan Walters. With Lynch pounding, the Seahawks entered San Francisco territory. Wilson broke a read-option around the right side for a gain of 19 to the 49ers’ 21.

With the Seahawks facing third-and-five at the San Francisco 15, Wilson retreated to pass and threw incomplete to Richardson. But the officials flagged third-string LB Nick Moody for roughing the passer, despite multiple replays showing he delivered a clean hit. FOX’s Troy Aikman called it “a terrible call.” A FOX replay analyst agreed.

Instead of facing fourth down, the Seahawks had a first down at San Francisco’s seven-yard line and Wilson capitalized with a touchdown pass to Richardson, the rookie’s first.

After giving up 178 yards to the 49ers in the first half, many of them to Colin Kaepernick, the Seahawks held them to 67 in the second and began teeing off on Kaepernick, sacking him six times. Seattle also recorded 10 tackles for loss.

“San Francisco did a great job of getting Kaepernick involved,” said Carroll. “We needed to understand how they were attacking us before we could make adjustments.”

Kaepernick did nothing of consequence against the Seahawks two weeks ago, but Sunday he continually escaped the pocket and extended plays. The Seahawks would have buried the 49ers if not for Kaepernick, who scrambled for 46 yards on nine carries.

After his slow start, Lynch finished with 91 rushing yards. Wilson did not throw the ball well and finished with a 69.4 passer rating, but he threaded the game-sealing TD to Richardson through a tight window.

“This was a great win for us,” said SS Kam Chancellor. “We can play like this as long as we want to as long as we stay committed.”

WR Jermaine Kearse caught a season-high five passes in six targets for 78 yards . . . Russell Wilson’s 34th regular-season victory broke a record for most in the first three years of a career. He was tied with Dan Marino and Matt Ryan . . . LT Russell Okung left the game with a chest wall injury, was admitted to a hospital, and later released. His status won’t be known until next week . . . The Seahawks are 23-2 at CenturyLink Field since the start of 2012. They have won 28 of their last 40 regular-season games.

The Seahawks play their final regular-season road game with a 5:30 p.m. Sunday meeting against NFC West leader Arizona (11-3) at University of Phoenix Stadium.