Thiel: Farewell to Harbs; hello to No. 1 seed?

With another domination by the defense, Seahawks usher Harbaugh out of the division and set up themselves well as playoffs loom. 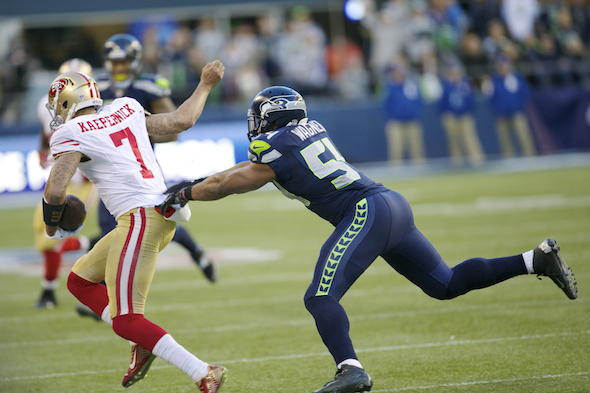 As did a young John Connor at the end of “Terminator 2,” we wiped away tears as the beloved cyborg, Jim Harbaugh, was lowered Sunday into a molten vat of NFL playoff also-rans. Unless someone springs for a sequel, the Seahawks-49ers rivalry will take no shape we recognize.

With a heavy sigh, we turn now to news of humans.

Suddenly the road to a second consecutive Super Bowl, which at 3-3 and even 6-4 seemed full of mud, stumps and boulders, is now clearing. Chuckholes remain, but if Seattle beats Arizona and St. Louis, it can do no worse than be NFC West champs with good shot at a first or second seed and the reward of  a first-round bye. The Seahawks own tiebreaker advantages over the other potential four-loss teams except for Dallas.

Playoff permutations are not on the radar of coach Pete Carroll, who, having dispatched his foil, Harbaugh, for the fifth time in the past six meetings, including the three in 2014, refuses to look beyond the moment.

“That stuff is so far out of what we’re concerned about,” he said. “You think maybe I’m just saying that? I don’t care about that stuff right now. We have two more games to play.”

True coaching bedrock, there. For the rest of us, it can’t be helped, because the recent past includes such a startling return to form that the road has begun to look like 2013 . . . best conference record, bye, and two home games.

What looks even more remarkable is the defensive renaissance that in the second half held the 49ers to 67 yards, four first downs and no points.

But since they did allow the 49ers a second-quarter touchdown — the Niners’ first against Seattle in seven quarters — the lapse was deemed unacceptable by CB Richard Sherman.

“We got to clean that up,” he said. “We had them on fourth down — we should have stopped them on that drive and they should have got nothing.”

Increasingly, the Seahawks’ apparent intent on defense, already the No. 1 NFL outfit in terms of fewest points and yards, is not merely to deny points but oxygen.

“These past four or five games I feel like we’ve been better than last year,” said LB Bruce Irvin, sending a small shudder through the rest of the NFL. Irvin had one of six sacks of QB Colin Kaepernick, who tried valiantly to pick up after the 49ers lost their top two running backs to injury: Frank Gore to a concussion and Carlos Hyde to a gruesome right leg injury.

Kaepernick ran more than he did in Seattle’s 19-3 win Thanksgiving night in San Francisco, with 46 yards in nine carries. And he was without an interception, passing for 141 yards on 11 completions in 19 attempts. But with injury subs in the offensive line, the 49ers suffered 11 tackles for loss, two each from K.J. Wright, Michael Bennett and youngster Jordan Hill, who also had two sacks.

Whatever wasn’t already broken in San Francisco’s messy season was beaten Sunday. They were down to a third-string back, Alfonso Smith, for the fourth quarter.

The Seahawks offense did just enough to not make the defense mad at them. Marshawn Lynch had 76 of his 91 yards in the second half, including a four-yard walk-in touchdown that put Seattle ahead for good. And rookie WR Paul Richardson caught a seven-yard TD pass in the fourth quarter to seal it.

But they were abetted by an opponent that did the unfathomable: The Niners had more penalty yards (78-50) than the Seahawks, the most football-criminalized team in the NFL. Included was a roughing the passer call on LB Nick Moody, a third-stringer in only because of an injury to impressive rookie Chris Borland. Moody was penalized for hitting Wilson with the helmet, not the facemask, even though replays showed otherwise.

It gave the Seahawks at first down at the 49ers’ 7-yard line, two plays before the Richardson game-breaker.

“I felt that he hit the quarterback in the chest with the hairline (of the helmet), and that’s a foul unless he has his face completely up and would hit it face-on with the face mask . . . I’m differentiating between the crown, which is the top of the helmet. The hairline is up at the top of the forehead.” (Update on Monday: The NFL office ruled that Hochuli erred;  Moody tackled properly and no foul should have been called).

If you understand that hair-split, you may want to buy a whistle and send a resume to the NFL.

For a change, the call went Seattle’s way.

“I thought it was a good call,” said Wilson, grinning. “It helped us.”

And it sank Harbaugh, who despite three consecutive NFC Championship appearances, has burned up his relationships with the owner and GM and likely will coach elsewhere next season, spoiling a wonderfully tense relationship with Carroll.

“I would not even address that comment right there,”  said Carroll, smiling. “Sorry.”

That likely is the last word between them in the Seattle-San Francisco phase of their relationship. Finally, Harbaugh knows what the deal is with Carroll.