6th round draft choice Ryan Lindley was on San Diego’s practice squad as recently as last month. Now he starts Sunday against the Seahawks No. 1-rated defense. Yeesh. 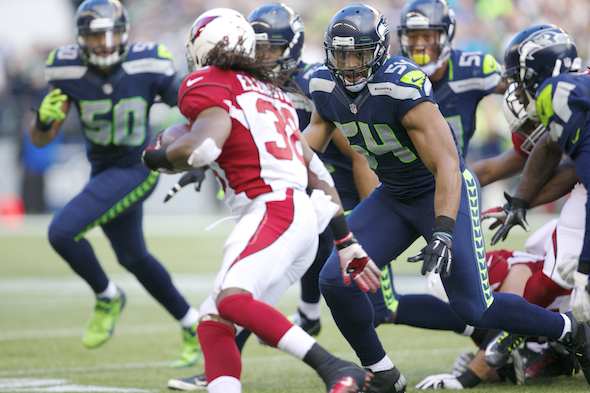 For the biggest game of the season, and probably the past five years they’ve been absent from the playoffs, the Arizona Cardinals will start at quarterback third-stringer Ryan Lindley, who in his NFL career before Thursday completed 93 passes in 181 attempts. He also has seven interceptions, three fumbles and no touchdowns. That was in 2012.

All he’s doing Sunday is going up against the No. 1-rated defense in the NFL, and maybe the past 10 years, which helped beat the Cardinals 19-3 in Seattle Nov. 22 with the more experienced Drew Stanton at QB. And Stanton was the replacement for Carson Palmer, who’s out for the season after tearing an ACL.

“I think Ryan gives us a great opportunity,” he told reporters Monday in Phoenix. What else would he say? “Fercripessake, we got a third-string stiff against these guys? Why don’t we all just get in a bus and drive off a cliff and save the Seahawks the trouble.”

Well, he could go to a fourth-stringer. Logan Thomas, a 6-foot-6, 250-pound behemoth from Virginia Tech taken by the Cardinals in the draft’s fourth round in April, has yet to play a down in the NFL.

“I think (Ryan) is a little bit more ready right now having been back in the system for a while,” Arians said. “I think Logan’s going to be a great player. Sometimes you can put guys in positions to fail. I want him to succeed when he plays.”

Success may be a relative thing Sunday. Coming out in one piece would be a success. Avoiding disaster would be an epic feat. And they did that, sorta, Thursday.

After Stanton (12-for-20 for 109 yards) had to be carted off in the third quarter with a sprained knee in a game against the Rams in St. Louis, Lindley came in (4-for 10 for 30 yards) and stayed out of trouble long enough for the Cards to prevail, 12-6.

The ability to navigate around steaming piles is what has Arizona at 11-3 and assured of a spot in the playoffs. They can clinch the NFC’s No. 1 seed with a win at home Sunday, so the situation is good — but the circumstances are perilous. Lindley returned to the desert only in November after being on the Chargers’ practice squad.

Arians said he told Lindley, a sixth-round pick out of San Diego State in 2012, to relax.

Well, what the hell. They can’t disqualify the Cards from the playoffs.

Seahawks coach Pete Carroll, refraining from licking his chops Monday, said they had draft scouting information on Lindley — he was in the same draft as QB Russell Wilson — but little that was fresh.

“We know of him — we studied him hard when he came out,” he said. “(Thomas) as well. We have background on those guys. But not a lot of game film.

“Bruce is a terrific quarterbacks coach. He knows what he’ doing. We know he’ll get the most out of them. It sounds like they want to play both of them, so it’ll be interesting to see how they do that.”

They will attempt to pull it off in part by leaning on a running game that looked decent against St. Louis despite the injury absence of RB Andre Ellington. The Cards had 143 yards in 33 attempts.

“I think they’ve committed to it a little bit last week,” Carroll said. “They knew they had to with a new quarterback popping in. They’ve got a real good running attack but they love throwing the football too. So we have to see how that all comes together.”

Carroll was asked whether his pre-game meeting with 49ers coach Jim Harbaugh was a “warm moment.” Smiling, Carroll said, “Uh, I don’t know that I would refer to it as a warm moment. We had a moment. You have to ask Jim if he felt it was a warm moment.  Nice exchange. Just coaches’ talk.” . . . The game is 5:30 p.m. Sunday on NBC at University of Phoenix Stadium, site of Super Bowl XVIX . . . Carroll said TE Cooper Helfet was likely to be ready after a sprained ankle, which was good news for Seattle considering fellow TE Tony Moeaki banged up his right shoulder and may not be available.