Only once in Seahawks history has Seattle had a defensive stretch as dominant as the current four-game run, That was 30 years ago in the Chuck Knox era. 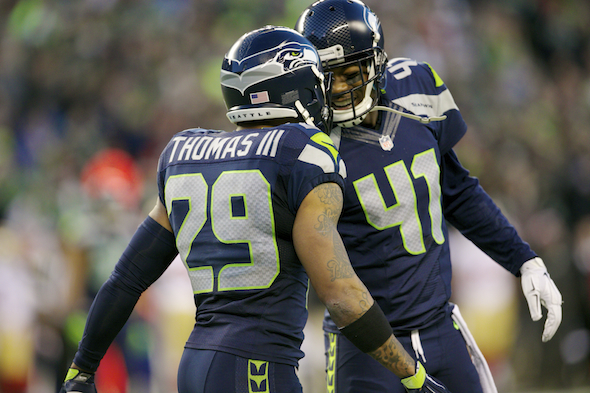 After losing to Kansas City at Arrowhead 24-20 last month, and with a gauntlet of NFC West foes plus NFC East leader Philadelphia looming, the Seahawks looked ripe to become the third consecutive defending Super Bowl champion to fail to reach the postseason. Even though the Seahawks were 6-4 Nov. 16 after losing to the Chiefs, the task ahead seemed too daunting to overcome.

But they returned to Seattle Nov. 23 and knocked off NFC West-leading Arizona 19-3 and followed with wins over San Francisco (19-3), Philadelphia (24-14) and the 49ers again (17-7). Not a playoff team had the season ended with the Kansas City game in Week 11, the Seahawks are currently the NFC’s No. 5 seed, but remarkably have an opportunity to become No. 1 and gain home-field advantage throughout the playoffs.

After allowing 27 points in the four wins, several defensive players took the opportunity to crow a little bit after earning a rare season sweep of San Francisco Sunday that featured six sacks and 11 tackles for loss.

LB Bruce Irvin: “These past four or five games, I feel like we’ve been better than last year.”

DE Cliff Avril: “Guys are playing good, guys are healthy, and we’re just playing lights out right now. Now, we just have to keep it going.”

LB K.J. Wright: “We’re rolling, we’re at our peak and we’re playing really good football. We’re playing together, just making plays. We’re just not letting teams breathe out there. So we have to keep it up. We have two more tough ones and they’re in our own division so we have to finish strong.”

LB Bobby Wagner: “We know we’re going to win as long as we come out and play like we know we can play. We think we can beat anybody. But we gave up a touchdown (to San Francisco). We need to clean that up.”

Irvin was right when he said, “These last four or five games, I feel like we’ve been better than last year.”

They have. En route to the Super Bowl, and in a year when they led the NFL fewest points and yards allowed, the Seahawks never had a four-game stretch defensively as good as the current one in terms of points allowed.

You have to go back 30 years to find a Seahawks team — one that featured Kenny Easley, Jacob Green, Dave Brown and Joe Nash – that produced a stingier streak than the current one. Fewest points allowed in any four-game stretch in franchise history:

That 1984 team finished 12-4 under Chuck Knox, defeated the Raiders 13-7 in a wild card game and lost to the Miami Dolphins at the Orange Bowl 31-10 in the AFC divisional playoffs.

Seattle’s sweep of the 49ers marks the first time in the Carroll era that the Seahawks won twice in the same season against San Francisco. Seattle followed its 19-3 win at Levi’s Stadium on Thanksgiving with a 17-7 win Sunday.

According to Elias, this is only the second time since 1980 that an opposing team held the 49ers to 10 or fewer points in a two-game season series. The Seahawks also did it in 2007 when they allowed three in 23-3 and 24-0 victories.

That’s the fewest points allowed in a season sweep by one NFC team over another since the league realigned its divisions in 2002.

There have been eight instances in which one NFC team swept another and allowed fewer than 20 total points. The Seahawks have been involved in five such sweeps:

In the Seahawks-49ers game at CenturyLink Field, Russell Wilson (12) and Colin Kaepernick (11) combined for 23. That’s an unusually low number of combined completions, but not a total that will stir Johnny Blood, Tobin Rote and their ilk out of eternal slumber.

In the 610 regular-season games in Seattle franchise history, only 10 featured opposing quarterbacks combining for 23 or fewer completions, as was the case Sunday.

Sunday’s was the first such game since Oct. 4, 1998 when Seattle’s Jon Kitna and John Friesz (11) and Kansas City’s Rich Gannon (12) also combined for 23. Fewest passes completed, both teams, in a Seahawks game:

In NFL history, the record for fewest combined completions in a game is one, done four times. All four of those games were played in the 1930 and 1940s. In the Super Bowl era (since 1966), the record is two, in a Sept. 29, 1974 game between the Bills and Jets. Joe Ferguson of Buffalo threw two passes, completing none. Joe Namath of the Jets threw 18 times, completing two.

One of the oddest Seahawks games occurred Oct. 16, 1983 in the Kingdome. The Seahawks defeated the Raiders 38-36 even though Jim Zorn completed only four passes in 16 attempts for 13 yards.

The Seahawks won with touchdown runs by Dan Doornink (1 yard), Zorn (18) and Curt Warner (6), a 75-yard punt return by Paul Johns, a 9-yard fumble return by Shelton Robinson and a 22-yard field goal by Norm Johnson.

Russell Wilson and Andrew Luck won their 10th games of the season Sunday for the third  year in a row. Wilson and Luck are the first starting quarterbacks to debut in the Super Bowl era (since 1966) to win at least 10 games in each of their first three seasons.