Seattle’s biggest annual sports party, the Sports Star of the Year Awards, is Jan. 21 at Benaroya Hall in downtown Seattle. Voting is underway for three categories. 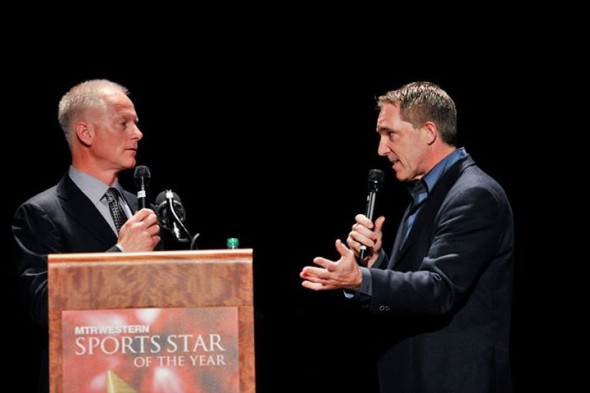 Earl Thomas, Kyle Seager, Clint Dempsey, Obafemi Martins, Shaq Thompson, the University of Washington crew and the Seattle Seahawks triumph at  the Super Bowl are among the nominees for the MTR Western Sports Star of the Year Awards at Benaroya Hall in downtown Seattle.

Public voting online for three categories — Male and Female Athletes of the Year and Sports Story of the Year — began Monday and will continue into January. Voting takes place on the Seattle Sports Commission event site here.

In addition to the three categories, honorees have also been selected by the Sports Star of the Year committee for these awards:

Tickets for the show only are $25; the 90-minute program begins at 7 p.m. A premium ticket for $100 includes a pre-show reception as well as a post-show party.

MALE SPORTS STAR OF THE YEAR

In June, Sounders FC star striker Clint Dempsey captured the country’s attention as the captain of the U.S. Men’s National Team, scoring the fastest goal in American World Cup history against Ghana and becoming the first American to score in three consecutive World Cups. He also had tremendous club success with the Sounders, scoring 15 goals and 10 assists and helping the club win the Supporters Shield for the top record in Major League Soccer.

As the quarterback of Washington State University football coach Mike Leach’s high-octane passing attack, Connor Halliday began the year on fire. In eighth games before suffering a season-ending injury against USC, Halliday racked up more than 3,000 yards and 32 touchdowns. Against Cal, he set the FBS single-game passing record with 734 yards.

In his first full season with Sounders FC, Martins made his presence felt. He led the Sounders with 17 goals and 13 assists, was named to the MLS Best XI team and was a strong contender for league MVP.

Third baseman Seager had a breakout year for the Seattle Mariners, leading the team with 25 home runs and 96 RBI. His performance earned him a Gold Glove Award and a selection to the American League All-Star team. He signed a seven-year contract in December to make him a long-term Mariner.

The high-energy free safety for the Seattle Seahawks, Thomas amazed fans, commentators and fellow players with his preparation, tenacity and ferocity on the field. He was selected as a Pro Bowler and All-Pro for the third consecutive year, logging 105 tackles and five interceptions while leading the NFL’s best defense in successful pursuit of the Super Bowl XLVIII championship.

FEMALE ATHLETE OF THE YEAR

In her senior year at the University of Washington, SooBin Kim was the No. 1 ranked female golfer in the NCAA. Arguably the best woman golfer in school history, Kim qualified for her LPGA card and will turn pro this winter. She has posted scores under par in seven of eight competitive tournaments this fall, including a win at the Edean Ihlanfeldt Invitational and a runner-up finish at the Pac-12 Preview.

Kim Little led Seattle Reign FC to the National Women’s Soccer League championship match with a league-high 18 goals. Little was named MVP,  was awarded the Golden Boot as the league’s highest scorer and became the only player in league history to be named Player of the Month three times in a season.

Building on her Pac-12 Freshman of the Year season last year, the University of Washington’s Kelsey Plum is off to a fast start this season, averaging 26.3 ppg with 3.5 rpg and 4.1 apg. She set a school single-game scoring record with 45 points against Oklahoma in November and is currently the top scorer in the conference.

Star junior Lianna Sybeldon led the Washington volleyball team with 179 blocks while also contributing 207 kills during the season. Her impressive play helped the No. 3-seeded UW reach the third round of the 2014 NCAA volleyball tournament.

Setting the single-season scoring record for Seattle University women’s soccer with 22 goals, Stephanie Verdoia led the Redhawks to a Western Athletic Conference championship and a berth in the NCAA tournament. She was WAC Offensive Player of the Year, first team All-WAC, WAC Tournament MVP and received the 2014 senior class award for NCAA Division I women’s soccer.

STORY OF THE YEAR

Seahawks run to the top of NFL

The Seattle Seahawks in 2013 had the best season in franchise history. They won the NFC West with a league-best 13-3 record, secured home-field advantage throughout the playoffs and capped the run with an astonishing 43-8 victory over the Denver Broncos in Super Bowl XLVIII to bring the city its first Lombardi Trophy. The defense was deemed among the greatest in NFL history:  FRirst since the 1985 Chicago Bears to lead the league in fewest points and yards allowed and most turnovers. The team was hailed in a parade that drew more than half a million fans to downtown Seattle. The run continued in 2014 after a 3-3 start. The Seahawks can defend their division title with a win Sunday at Arizona that would improve their record to 11-4.

Under coach Michael Callahan, the University of Washington men’s crew won an astounding fourth consecutive national rowing championship. With five new rowers and a new coxswain, they became only the third school to win four in a row. In the release year for Boys in the Boat, a New York Times best-selling book that chronicled the Huskies’ feat of winning the 1936 Olympic gold medal in Hitler’s Germany, the UW crew again attained a nationally acclaimed pinnacle.

Mariners back in the playoff hunt

The Seattle Mariners had a 16-game turnaround under first-year manager Lloyd McClendon that fell one game short of making the playoffs, an 87-win season that surprised all of Major League Baseball and many in Seattle. Led by great pitching from Felix Hernandez and Hisashi Iwakuma, as well as offense from veteran newcomer and All-Star second baseman Robinson Cano, the Mariners drew more than two million fans to Safeco Field. The off-season signing of free agent slugger Nelson Cruz added more intrigue for the 2015 season in which the Mariners are among the favorites win win the American League pennant.

After a significant roster overhaul including the signing of star players Kim Little and Sydney Leroux, and a change in home venues, the Seattle Reign FC had a turnaround 2014 season. With a record of 16-2-6 and a +30 goal differential, they were clearly the best team in the NWSL in the regular season, making it to the championship game before falling 2-1 to FC Kansas City.