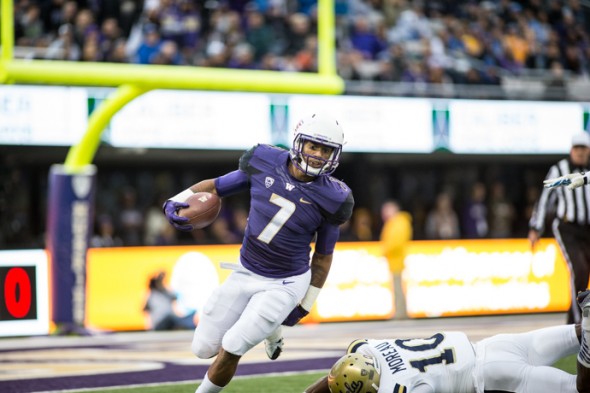 Three University of Washington football players — junior Shaq Thompson and seniors Danny Shelton and Hau’oli Kikaha — were selected first-team All-America by The Associated Press Tuesday. This is the first time in school history that three landed on AP’s first team, and the first time since 2002 that Washington has had even one first-team AP All-America.

Thompson, a linebacker/running back who also starred on special teams, made AP’s squad as the all-purpose player. Shelton is a defensive tackle and Kikaha a linebacker. They are Washington’s first, first-teamers since wide receiver Reggie Williams in 2002.

Thompson, who won the Paul Hornung Award earlier this week as the nation’s most versatile player, was the national leader in defensive touchdowns with four, and also shared the national lead with four fumble recoveries. On defense, he had 71 tackles with one interception and three forced fumbles.

On offense, Thompson rushed for 100 yards in each of his two starts at tailback, including 174 yards on 15 carries at Colorado. He had 456 yards on 61 carries, an average of 7.5 yards per carry.

Shelton, an Auburn native previously named first-team All-America by USA Today, ranked second among the Huskies with 89 tackles and 16.5 tackles for loss, and also ranked third on the team with nine sacks. He tied for the Pac-12 lead with four fumble recoveries. Shelton spearheaded a defensive line that finished second in the conference, allowing 121.9 rushing yards per game.

Kikaha had a school record 18 sacks and 24 tackles for loss. He is also the Washington career record holder with 35 sacks. He had at least one sack in 12 of 13 games, was a finalist for five national awards and was a first-team Academic All-District VIII honoree.

Washington had three first-team All-Americas in 1991 with DT Steve Emtman and WR Mario Bailey earning recognition by The Associated Press, which named LB Dave Hoffman to its second team. However, Hoffman was a first-team choice by the Football Writers Association of America and Football News.

Washington last placed two players on AP’s first team in 1997 when center Olin Kreutz and guard Benji Olson were selected. The only other season in which Washington had two AP first teamers was 1982, when PK Chuck Nelson and LB Mark Stewart were honored.