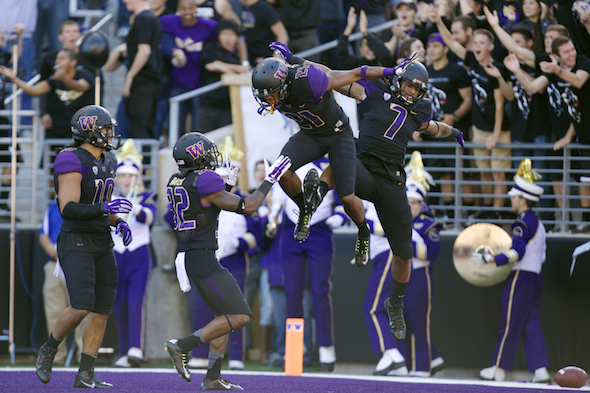 Earning an Associated Press All-America first-team selection brings out the truth, it seems.

Washington DT Danny Shelton, LB Hau’oli Kikaha and LB Shaq Thompson each provided their own piece of unfiltered perspective on UW’s 2014 regular season after each was named Tuesday to the AP’s first team, marking the first time in school history three players earned the distinction in the same season.

“Not so much regret. Anyone who’s got any sort of a perfectionist in them wants to go back and improve on something they’ve done,” said Kikaha, who set UW records in 2014 for single-season and career sacks, and single-season tackles for loss.

“I think a lot of us gave it our all, and things didn’t end up in our favor,” he said.

After spending about half the season splitting duties between running back and linebacker, sometimes playing both positions in the same game, Thompson admitted he never anticipated filling a two-way role when he signed with the Huskies out of Grant Union High School in Sacramento. The 6-foot-1, 228-pound linebacker received carries in six games in 2014, racking up 456 yards and two touchdowns to go along with 70 tackles and four defensive scores.

“I honestly just thought I was going to play defense the whole time I was here,” he said after being named to AP’s first-team as an all-purpose player. “Coach (Petersen) came in and changed that. I got to help out, playing unselfish football and just doing what the coaches asked.”

Shelton’s signature moment came in the second half of the Apple Cup, when he did a pre-snap barrel roll, then busted through Washington State’s offensive line to sack quarterback Luke Falk.

“To see me do a barrel roll, I think it just kind of almost made them sh-t their pants,” he said Tuesday. “It’s just something you don’t expect. If I was playing on the other side, and was in the same situation, I wouldn’t know what to do.”

No one really figured out how to block Shelton this season, either.

At six-foot-two and pushing 340 pounds, he is a run-stopper that takes on double-teams while showcasing surprising speed. He finished the regular season with nine sacks, part of 16.5 tackles for a loss.

“He reminds of no one I’ve been around,” said UW coach Chris Petersen. “When you see him running down the line of scrimmage and making plays on an option or a screen, I think that’s what really separates him.”

In a move not typical of a college football coach, Petersen also thanked the media for selecting Shelton, Kikaha, and Thompson.

“My first reaction is, they finally got it right,” Petersen said. “I think these things are so political so often. A lot of these awards go to the best players on the best teams, but I think these three guys are truly deserving.”

Their candor probably shouldn’t come as a shock. Shelton and Kikaha are seniors, and Thompson, a junior, have, at some point this season, been projected as first-round choices in the 2015 NFL draft. Here’s the latest look at how they might fare.

Thompson won’t announce a decision regarding his future until after the Huskies play Oklahoma State (6-6, 4-5 Big 12), Jan. 2 in the TicketCity Cactus Bowl at Sun Devil Stadium in Tempe, AZ.

Recipient of the 2014 Paul Hornung Award, given to the nation’s most versatile player, Thompson said he wants to play defense in the NFL. He was also named Tuesday to the Sports Illustrated All-America first-team, Kikaha the magazine’s second team and Shelton honorable mention.

The Huskies practice through this week before taking time off for the holidays. When they return to practice, they’ll be in Arizona, prepping for the Cowboys.

“To be called an All-American with Shaq and Hau’oli is one of the highest achievements,” Shelton said. “To be able to finish this season with a bowl game is just the cherry on top of a milkshake.”