Seahawks say K.J. Wright is a core player, and rewarded him with $27 million contract ahead of the heavy lift of a new deal for QB Russell Wilson. 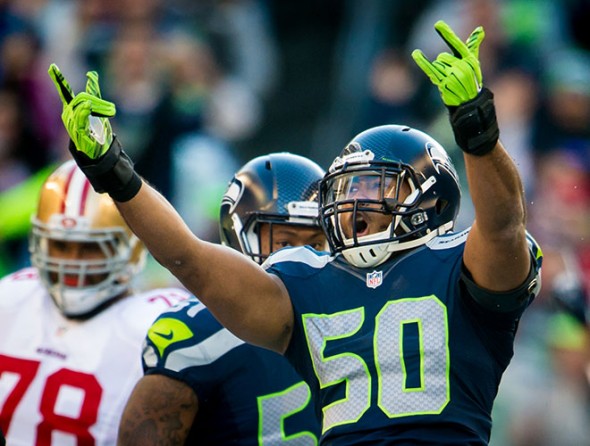 As various teams around the NFL wobble, fall and convulse, the Seahawks keep striding in the December storm, attempting to outlast as much as outwit. Thursday, they outspent, securing LB K.J. Wright to a four-year extension worth a reported $27 million.

The deal also proved that a good contract doesn’t necessarily require an outsized personality. Unlike Richard Sherman, Earl Thomas, Doug Baldwin and Michael Bennett, teammates who signed lucrative extensions with Seattle, Wright ranks near the bottom of the team in bombast.

“When I first got here, I wasn’t that good; they didn’t expect too much out of me, I don’t think,” said Wright, the pride of Olive Branch, MS., and Mississippi State. “I was a fourth-round guy, playing different positions. But I came in since day one and showed them who I am and how good a football player I can be.”

As much as anyone who has been here in coach Pete Carroll’s five years, Wright is a system guy, a product of coaching and patience who is achieving near the maximum of his potential. It wasn’t as if he didn’t have talent; his first season of 2011 showed enough promise that it made easier the decision to unload LB Aaron Curry, the former first-round pick who proved one of the larger draft busts in franchise history.

But his upside was still murky until Wright made himself more valuable by showing the ability to play all three linebacker spots with little dropoff.

“It helped me out tremendously,” he said. “They know that I can do whatever they ask of me. And the more you can do, the more you’re worth.”

He was the sufficiently worth it for the Seahawks to keep him away from free agency. He was in the final season of his rookie contract that pays him $1.43 million. He advances to the top of the outside linebacker class.

The decision wasn’t much of surprise. He was seen by Carroll and GM John Schneider as as “core” player, someone whose value is not readily replaced in the Seahawks scheme. And told as much.

“We’ve actually been talking about it since the spring time,” Wright said. “They said we were going to try to get something done. But later on in the season, I started to get a little worried that nothing was going to be done; I might be a free agent. But they came to me and worked something out. And now everybody’s happy.”

Which isn’t to say anxiety was never present.

“The more the season is going on, it’s only human nature to kind of think about: ‘Am I going to be here, or am I not?’ But I didn’t try to let it affect me too much. For the most part, I just stayed focused and just on football.”

He quit worrying this week: “I was happy (Wednesday). Everything feels good. We signed everything last night. It’s just a blessing to know that the Seahawks want me here for a long period of time. Coach called me the night before explaining how much I mean to the team.”

Wright is the team tackles leader with a career-high 96, has two sacks, three forced fumbles and three passes defensed. That helped advance him to the core class that would have to be shielded against the predation of free agency.

“I had a number in my head that I wanted to sign (for), and they actually exceeded that number,” he said.  “So I was happy with that. They went above what I was expecting I was going to get.

“I’m not going to lie: It would’ve been nice to kind of see what other teams thought of you — see what your value was. “I didn’t want to go anywhere else. I loved it here.”

The signing was abetted by the October purge of WR Percy Harvin’s contract. The Seahawks and the Jets will combine to pay Harvin the guaranteed $18 million for the first two years of his deal, but no more in the future.

The next two priorities are QB Russell Wilson and MLB Bobby Wagner. League rules say clubs may begin to renegotiate or extend the contracts of players taken in the 2012 draft (Wagner was a second-round pick; Wilson a third) beginning Dec. 29, the day after the end of the regular season.

Wilson is in the third year of a four-year, $3 million rookie contract and Sunday passed Dan Marino for most wins (34) for a quarterback in the first three seasons of a career. Speculation is that he will reap in the vicinity of $20 million annually. Perhaps in anticipation, Wilson announced through the league that he is going from two agents to one, releasing Bus Cook and staying with Mark Rodgers.

The plotting for the massive deal has been underway for a couple of years. The Seahawks have been either avoiding or jettisoning numerous long-term commitments in order to plan for hammering Wilson’s ginormous deal under the NFL salary cap.

Thursday they made an exceptional exception.