Seahawks 8-point picks, but can they score 8?

The Seahawks Sunday night face Ryan Lindley, a quarterback dismissed by handicappers. But the Seahawks still need to score, always a problem against Arizona. 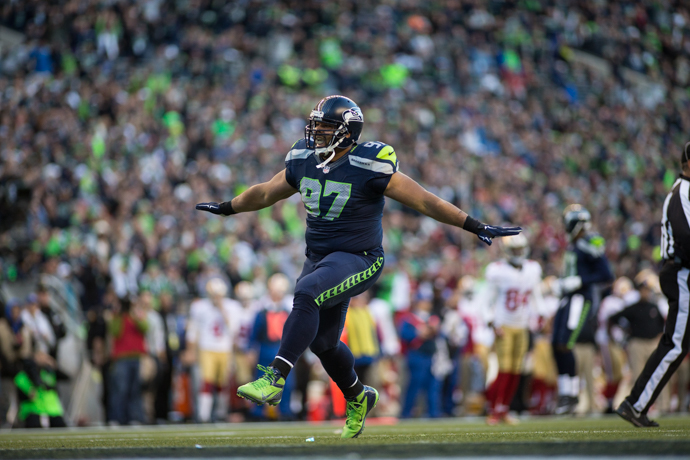 After the Seahawks opened as seven-point road favorites over Arizona, the spread increased to eight as soon as Cardinals Coach Bruce (Almighty) Arians named maligned Ryan Lindley as his starting quarterback for Sunday night’s game at University of Phoenix Stadium. Lindley swabbed in relief of the injured Drew Stanton last week in St. Louis. He has quarterbacked only one NFL win on his own, a 38-10 victory over Detroit Dec. 16, 2012.

One handicapper this week called Lindley, who will face the top-rated Seattle defense, “the worst quarterback I’ve ever rated,” and at least one stat bears that out. The San Diego State product owns the worst Total QBR in the NFL over the past three seasons among players with at least 200 plays, and has never thrown a touchdown pass in his career. His backup, Logan Thomas, has never started an NFL game.

So it’s easy to see why oddsmakers are taking such a dim view of the 11-3 Cardinals, who can secure the NFC West title and the NFC’s No. 1 seed with a victory. Question is, how are the Seahawks going to cover the eight points?

They tallied 19 against the Cardinals in the first meeting Nov. 23, but 12 came on four Steve Hauschka field goals after multiple failures by the Seahawks in the red zone, and one unlikely touchdown by Cooper Helfet.

Without busted Arizona coverage that allowed WR Ricardo Lockette to catch a 48-yard pass from QB Russell Wilson, Hauschka would not have been in range to kick his second field goal. And without an out-of-nowhere 40-yard read-option run by Wilson, Hauschka wouldn’t have had a chance at this third.

Seattle’s only touchdown came when Helfet caught a ball at the line of scrimmage and four Cardinals defenders oddly failed to tackle him along the sideline. So 13 of the Seahawks’ 19 points were the result of Arizona’s defensive miscues.

Meanwhile, Arizona missed a field goal, allowed a blocked punt, threw an interception and dropped a touchdown pass (Jaron Brown) in the end zone. Even with all that, the Cardinals played the Seahawks about as well as they can be played at CenturyLink Field.

Now the Cardinals draw the Seahawks in Phoenix, where Arizona is 7-0 and looking for the first perfect home record in franchise history. The Cardinals are not only the only NFL team to allow 20 or fewer points in every home game this season, they lead the league with 12 such games overall (11-1 in those contests) as the following shows:

Lindley might not be much, but the 12s should take scant comfort in the eight-point spread. The Cardinals have won 11 games in a variety of ways and last Sunday became the first team to win this season without scoring a touchdown (defeated St. Louis 12-6). They have won a league-high six times against teams that currently hold a winning record, and will have WR Larry Fitzgerald, who missed the first meeting with an injury.

Arians is probably a lock to win the NFL Coach of the Year award in no small part because of the defense he’s built. Arizona ranks second in the turnover margin at +12 and has held opponents scoreless in the fourth quarter a league-high eight times (Arizona’s fourth-quarter scoring margin is +59). The Cardinals also lead in come-from-behind wins with nine and rank No. 1 in the NFC in opponent red-zone efficiency (40.5).

The Cardinals don’t have a great offense (No. 22), but are first in the NFL with nine defensive touchdowns, and can be occasionally sneaky good. Since the start of 2013, Arizona has scored six offensive TDs covering 75 or more yards, most in the NFL.

Above all, the Cardinals have solved Wilson and Marshawn Lynch. Arizona sacked Wilson 11 times (seven in the last game) in the last two meetings between the teams while holding Lynch to a total of 110 yards (3.3 yards per carry) and no touchdowns.

One example: When Lindley steps on the field Sunday, the Cardinals will become only the third team in the past decade to use three starting quarterbacks and win 11 or more games (also the 2005 and 2010 Pittsburgh Steelers).

Wilson has been sacked multiple times in 11 of Seattle’s 14 games, and is currently working on a streak of six consecutive games suffering at least two sacks that dates to Nov. 9 against the New York Giants. No quarterback in franchise history has ever been taken down two or more times in six consecutive games (over the same six-game span, 12 different Cardinals have recorded at least one sack).

Wilson was also sacked multiple times in five consecutive contests from Sept. 14 through Oct. 19 this year, the second-longest streak in franchise history. But let’s focus strictly on the last six. This is how many times Wilson has been sacked since Week 10 vs. other quarterbacks whose teams have qualified for the playoffs or are in position to do so:

“We’ve been practicing to improve things we need to improve,” offensive coordinator Darrell Bevell said this week, addressing Wilson’s pocket woes. “We just have to block better. We have to be able to get the ball out quicker. We got to get open on time.

“I mean, we have the conversation all the time on how they all work together and we have to be on point all the time, particularly against this opponent. They bring tons of pressure. They can bring it on every single down if they so choose, so we have to be prepared for it.”

It’s not likely to come together fast enough for Wilson avoid another major beating Sunday night, but oddsmakers are so down on Lindley they apparently aren’t worried about it.