The Seahawks, favored by eight, put together their best performance of the year in overwhelming Arizona Sunday night to take over first place in the NFC West. 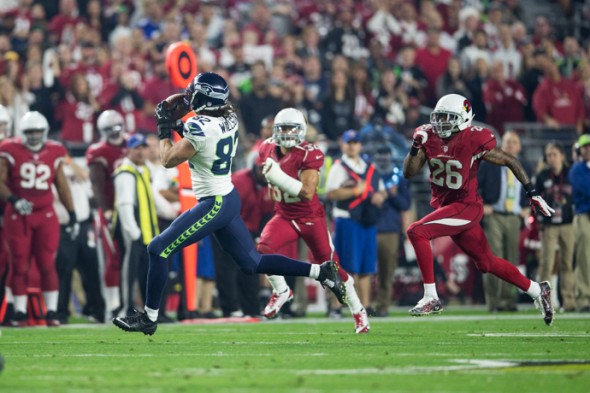 TE Luke Willson is off for an 80-yard touchdown after catching a throw from Russell Wilson Sunday night against Arizona. / Drew McKenzie, Sportspress Northwest

Defying oddsmakers who had them favored by eight points, the Seahawks rolled up a franchise-record 596 yards and delivered another stunning defensive performance in overwhelming the Arizona Cardinals 35-6 Sunday night at University of Phoenix Stadium in Glendale, AZ. The fifth consecutive win gave them first place in the NFC West and set them up for a chance at homefield advantage throughout the playoffs.

The game was close for a half (14-3), but the Seahawks (11-4) blew it apart in the second. They get the NFC’s No. 1 playoff seed, which they had a year ago, if they defeat the St. Louis Rams in their regular-season home finale Sunday.

The Seahawks, who have won their past five by a combined 114-33, will need some help to become the No. 1 seed but are in position, thanks to their best all-around effort of the season, which started with QB Russell Wilson.

Wilson threw for 339 yards and a pair of touchdowns to TE Luke Willson, one an 80-yarder, and ran for 88 and a TD. Wilson not only matched the longest TD pass of his career, he had the longest run of his career, 55 yards, and darted five yards for a score on one of the great juke jobs in recent franchise history.

“Russell was just ridiculous, he was so good,” said a grinning head coach, Pete Carroll, whose team won eight of nine since starting 3-3. “He made some fantastic big throws, and his touchdown run was, well, it’s as good as you can get.”

Wilson was sacked 11 times by the Cardinals in the two previous meetings, including seven times at CenturyLink Field Nov. 23. But Sunday night, the Cardinals reached him once as Wilson (a) used a quick passing game and (b) eluded trouble with effective scrambles or throwing the ball away.

Wilson, who passed for 339 yards (second-highest total of his career) and had a 122.9 passer rating, had no end of offensive collaborators. Marshawn Lynch didn’t start due to an upset stomach but gulped some Skittles and rushed for 113 yards and two scores against the NFL’s No. 3-ranked defense, including a 79-yard TD in the fourth quarter that may have been the equal of his famous “Beast Quake” romp in the 2010 playoffs.

“That might have been the best run I’ve ever seen,” said Carroll. “It reminded me of O.J. Simpson against Ohio State.”

Luke Willson nearly matched his entire season’s output with three catches for 139 yards and two scores, including the 80-yarder in the second quarter that staked the Seahawks to a 7-3 lead they would never relinquish.

Doug Baldwin, with seven catches for 113 yards, including a 49-yarder.

“That’s a lot of yards against a really tough group,” said Carroll. “For Tom Cable (assistant head coach/offensive line) to put that together is just a fantastic job.”

The Seahawks held the Cardinals to 216 total yards, 29 on the ground. Sunday’s game marked the fourth time this season the Seahawks have held an opponent without a touchdown.

“That’s just great stuff,” Carroll added. “The thing I’m most proud of is that we continued to play at this type of level. It gives us real confidence going into the final game of the season.

“This is as good a run as I can ever remember, and this gives us a chance to have high hopes. Personally, I couldn’t have had more fun than I did tonight. I had a frickin’ blast.”

Unlike Arizona quarterback Ryan Lindley. A third-stringer playing because of injuries to Carson Palmer and Drew Stanton, Lindley completed 18 of 44 for 216 yards and was sacked four times. He proved to be as ineffective as advertised. CB Richard Sherman also got him with a 53-yard interception return.

“We just believe in each other and we’ve worked so hard for this,” said Wilson. “We made a lot of plays tonight. Marshawn Lynch’s run, does it get any better than that? That was pretty special.”

The game would have been over earlier if usually reliable Steven Hauschka hadn’t clanked three field goals, from 52, 50 and 47 yards, and if the Seahawks hadn’t been nailed for 10 first-half penalties (to Arizona’s one) that thwarted two scoring drives.

The Seahawks close out the regular season at 1:25 p.m. Sunday against the St. Louis Cardinals at CenturyLink Field (FOX).