He has said it many times, but after yet another prime-time blowout on national TV, it’s worth hearing Pete Carroll explain how the moment never gets too big for the Seahawks. 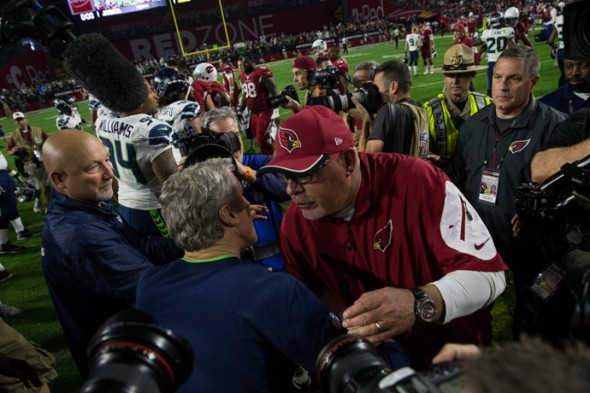 The Seahawks advanced their record in prime-time, nationally telecast games under coach Pete Carroll to 15-1 with the 35-6 rub-out of the Cardinals Sunday. Given that the networks’ attempt to schedule what are anticipated to be quality match-ups, the record is nothing short of phenomenal.

Carroll is often asked about how he gets his team up for such games, and he always answers the same way: We don’t. The theme is a familiar one to reporters who follow the Seahawks regularly. But on his weekly show on ESPN 710 Monday morning,  Carroll addressed the topic at length.

Given the dominance shown on both sides of the ball over a good Cardinals team in their sold-out house, his explainer is worth sharing for fans who haven’t heard it, and a reminder for others who may have in their jobs what they perceive to be big moments and small moments.

Asked about the home game Sunday against the always aggravating St. Louis Rams, from which a win would give Seattle a No. 1 seed in the NFC and its benefits — a first-round bye and home games in the next two rounds — Carroll expounded:

“We’ve been preparing for this game for years. When it comes down to this game, we’ll be ready. Our guys would play tomorrow if they could. They’re having the time of their lives.

“We don’t ever want to adjust our play to who we’re playing; what the match-up calls for, or the setting, or the hype. We go the other way — it doesn’t matter who or where we’re playing.

“We get these (prime-time games), and we get to show we know how to do that. Not playing to the moment, but the way we prepare to play. That’s something we have great control over.

“When we try to match up this, match up that, this coach or that player, you don’t always hit it. Then, what happens next week when you don’t (have a big-time game)? Do we not play as fired up for that game? That’s why with every practice, with every rep, we try to do it as hard as we can. We condition our minds that that is the only way we can do it.

“Now we have a championship game. We should take it right in stride.”

They are not cyborgs, and mental conditioning is not a switch to be flipped. Earl Thomas admitted early in the season he didn’t have that championship feeling. But it can be regained with mental rehearsals and repetitive drills. The route is never automatic, but it can become familiar.

The result is what you saw Sunday, and what Carroll felt.

“I had as much fun as you can have coaching,” he said. “For me, it’s a blast. I’m just cheerleading.”

Doing a good thing well and often is a blast. Feel free to take notes, for whatever your endeavor.