In only eight games in NFL history did a team rack up more than 500 total yards and simultaneously hold its opponent to fewer than seven points on the road. 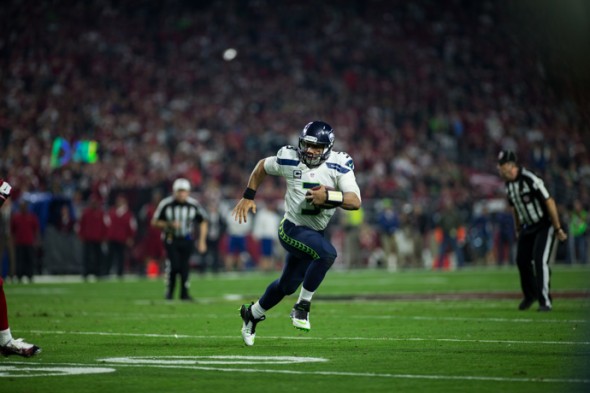 Last thing anyone – you, me, and Las Vegas swamis — expected from the Seahawks Sunday night, especially against one of the best defenses in the NFL, and on the road, was a 300-yard passer, nearly two 100-yard rushers, two 100-yard receivers, an 80-yard catch-and-run by a tight end who outraced a safety for more than half the field, and a near-repeat of Beast Quake.

Imagine the depth and breadth of carnage if Seattle hadn’t played with so many backups. Or if Steven Hauschka hadn’t clanked three field goals all within his range. Or if Marshawn Lynch, ailing with a bad boiler, played the first quarter.

“That,” Pete Carroll said after Seattle’s 35-6 demolition of the Arizona Cardinals, “was just about the most fun you can have in football.”

True enough. And that was, in a narrow sense, one of the most rare games in NFL history.

Start with the fact that since the 1970 NFL-AFL merger, only four teams amassed more  yards in a road victory than the Seahawks, who piled up a franchise-record 596 at University of Phoenix Stadium Sunday night.

Not counting Seattle’s eye-popper Sunday, in only one of those other games – Bears at Giants Nov. 14, 1943 – did a team gain more yards than the Seahawks posted against the Cardinals. And in only one of those other games – Cincinnati at New England Dec. 7, 1986 – did the winning team (Bengals) defeat an opponent that had 10 or more wins entering the contest, as did the Seahawks, who stuffed the 11-3 Cardinals. The eight games:

As the chart indicates, Seattle was on the losing end of two such games, in 1986 and 1988, debacles now put to rest.

Russell Wilson targeted TE Luke Willson three times Sunday and the Rice product, who clocked a 4.5-second 40 at the NFL combine before the 2012 draft, responded with three receptions for 139 yards. His first TD, an 80-yarder, gave Seattle a 7-3 lead. His second, of 20 yards, upped the advantage to 21-6. Willson also nearly turned a 39-yard reception into a third touchdown.

Willson not only set a franchise record for most receiving yards in a game with three or fewer targets (includes all receivers), he became the second tight end in club history to crack 100 with three or fewer. Anthony McCoy, injured the last two years, had 105 yards on three targets in a 58-0 wipeout of the Cardinals Dec. 2, 2012.

Willson also came within a yard of matching the club record for most single-game receiving yards by a tight end. Charle Young had 140 on seven receptions against San Diego Oct. 9, 1983.

Along with Michael Vick, Wilson is one of two players in NFL history with multiple games of 300+ passing yards and 75+ rushing yards. In reverse chronological order, the list:

Sunday’s game would have turned into a rout far earlier if the Seahawks hadn’t been flagged for 10 first-half penalties to one for the Chargers. For the second consecutive season, the Seahawks lead the NFL in penalties (128), but will probably finish with a lower total than the 2013 team incurred (152) en route to the Super Bowl.

The major difference between this year and last: This year’s team is sloppier in advance of the snap, drawing a galling 61 infractions (false start, illegal motion, delay of game, etc.) to last year’s 52. The rash of mental miscues drew a rebuke from NBC’s Chris Collinsworth during the broadcast Sunday night.

“They need to clean that up during the playoffs,” he said. “They are making it harder on themselves than it needs to be.”