Brash Michael Bennett declared the Seahawks defense the greatest ever. Premature, yes, but fun. And he has a decent point. 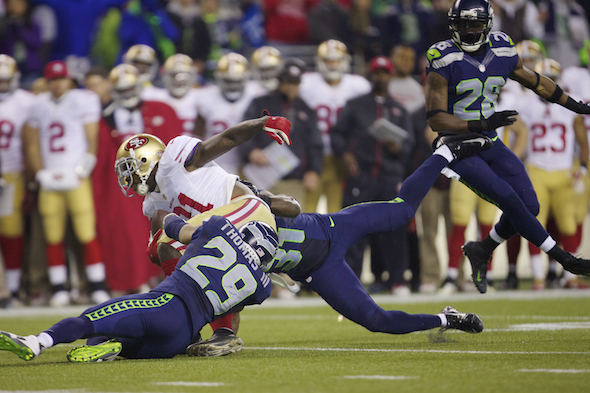 As the NFL playoff field sets up this weekend, the Seahawks have returned to the top of several national-media power rankings. If they beat St. Louis Sunday, they will be two wins shy of a return to the Super Bowl. So talk has begun of the team’s place in history — begun Sunday not by outsiders, but by locker-room sage DT Michael Bennett.

“We’re the best defense to ever play football,” he said Sunday in Glendale, AZ., after helping scatter the entrails of former NFC West leader Arizona 35-6. “So when we play the way we play, the way we’re capable of playing, whatever (Cardinals QB Ryan Lindley) did didn’t really matter . . . I don’t think anybody can play with us.”

Discussions of G.O.A.T. (greatest of all time) can begin in earnest if the Seahawks become the first NFL champion in a decade to repeat. Nate Silver’s fivethirtyeight.com backed Bennett and then some by suggesting if the Seahawks win the Super Bowl, they will have to be considered among the best teams in history. The site’s Elo rating system gives some credit to year-to-year excellence, which has always been the prime directive in coach Pete Carroll’s plans to own the football universe.

Sought out Tuesday in the locker room, LB Bruce Irvin concurred with Bennett’s view of history.

“I agree,” he said. “I would say we are this season. If we won another Super Bowl, I’d say we should be ranked with the best of all time.”

Before we get too far ahead with comparisons to the Cowboys Doomsday I and II of the 1960s and 1970s, the Vikings of 1969-71, the Steelers of the mid-Seventies, the Bears of the mid-Eighties and the Ravens at the start of this century, the Seahawks have already accomplished a feat worth noting — they have remained No. 1 on defense for most of three years despite rules changes designed to blunt the Seahawks’ effectiveness.

“The game was so different then than now,” Irvin said, “with all the rules changes we’ve had. We like to play physical, but we’ve adjusted with the rules of the game. And they changed some rules because of us. But we’re still one of the best defenses. That says a lot.”

The erosion of the defense’s position in the game’s rules has come about for two reasons: Increasing the spectacle of offense to draw more TV interest, and to thwart successful litigation over reckless disregard for the consequence of injuries (that is not the same thing as improving player safety, despite what the NFL tries to tell America).

Since 2010, the NFL has changed the rules of contact almost annually to cut down on head injuries as well as impediments, such as defensive holding, that retard offenses. It’s all about making or keeping money, but regardless of the financial backstory, the players have to make adjustments each year.

From Carroll on down, the Seahawks believe that rules changes the past off-season were designed to curb Seattle’s ability to push rules to the limit and beyond. Many Seahawks, including Carroll, took it as a compliment. But the Seahawks foiled the changes by adapting instead of pouting. They have given up 33 points in the past five games, all wins, during a part of the schedule that was forecasted to be boulders and barbed wire.

CB Richard Sherman declined to join Bennett in the GOAT gloat, but he made the point that it’s nearly impossible to compare different eras because of the changes.

“You have to rate defenses in their own time periods, because the rules today, I don’t know if the defenses back then would be as good,” he said. “They were killing quarterbacks. They’d probably get ejected (now) for half of the stuff they were doing back then. Reklama: stiklo pertvaros, sulankstomos stiklinės durys, turėklai, laiptai, grindys ir terasos Provitra But those were the rules that they played by. They played the game at a high level. (Now) they’re making it a passing league. I’m sure they’re breaking all kinds of records in passing yards and average points a game.

“It’s so hard for guys to tread that line because you’re going all out, but you have to kind of tempo yourself a little bit because of the rules.”

Sherman was asked how the current Seahawks would have fared in earlier eras.

Then he smiled. He knew better.

“I don’t know if Kam Chancellor would not be fair for a lot of people,” he said. “He stays in a dark place. I don’t know if enough people can bring flashlights.”

Darkness is what opposing offenses see across the line of scrimmage. But enlightenment is visible for the discerning viewer. Despite the predations of schedule-makers and rules-makers, the Seahawks defense is again in position to carry the day, if not the season.

Whether they are as good as Minnesota’s Purple People Eaters or Dallas’s Doomsday crowd will never be known. Call Ghostbusters for that. The Seahawks need only prevail over their contemporaries.

The division will need to be dealt with Sunday. If successful, historians can begin dusting off the archives.