Allowing 16.5 points per game overall after ceding only 33 in their past five games, the Seahawks have a chance to lead the NFL in scoring defense for the third consecutive year. 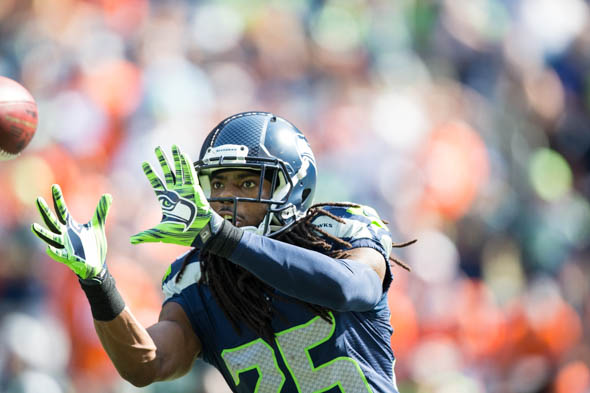 Over the past year, the Seahawks have signed six of their best defensive players – CB Richard Sherman, FS Earl Thomas, SS Kam Chancellor, DL Michael Bennett, LB K.J. Wright and DE Cliff Avril — to contracts worth a guaranteed $132.7 million (and a lot more than that on paper). Still in line for a new deal is LB Bobby Wagner, whose return to the lineup following a five-game injury absence is a major reason why Seattle again roosts atop the NFL statistical heap.

In the five games Wagner missed – at St. Louis and Carolina, vs. Oakland and the New York Giants, and at Kansas City – the Seahawks allowed an average of 20.4 points and 277.8 yards per game. They lost two of the five (Rams and Chiefs). In the five games since Wagner’s return, the Seahawks have ceded an average of 6.6 points and 193.6 yards. Seattle is 5-0 in those, outscoring foes an almost absurd 114-33.

Wagner isn’t entirely responsible for the defensive resurgence (Chancellor’s return to optimum health is a big part of it) in which the Seahawks took over the NFL lead in fewest average points (16.5) and yards (268.6) allowed. In 2013, Seattle led both categories (14.4, 273.6) en route to Super Bowl XLVIII.

If the Seahawks can clamp down on the St. Louis Rams in their regular-season finale Sunday at CenturyLink Field, they can become not only the first franchise since the 1985-86 Chicago Bears to lead the league in fewest points and yards allowed in consecutive seasons, but only the fourth to do that since World War II.

Paul Brown’s Cleveland Browns led both stats in 1954-55, and Bud Grant’s Minnesota Vikings did it in 1969-70. It is a good thing to meet people from different countries to get a colombia hookups It is the best way to know about other cultures and their way of life. One thing that a person should consider in meeting a Colombia person is to use this site to get a free dating service. There are many sites that offer this service, but you have to be careful in choosing the best site to meet people. The Browns won NFL championships both years and the Vikings played in Super Bowl IV following the 1969 season.

Seattle’s scoring defense number is especially impressive. It’s up a tick over the past two years, but if the Seahawks can maintain it through Sunday they will join Brown’s Browns and Grant’s Vikings as the only teams to lead that stat for three (or more) consecutive seasons, as the following shows:

Given so many rules changes over the years, it’s meaningless and, in fact, misleading to compare defenses from different eras. But the fact that only three franchises, within their eras, led in scoring defense three (or more) times consecutively speaks to the difficulty of the feat.

Put another way, The Fearsome Foursome and Purple People Eaters didn’t do it, nor did the No Name Defense, Steel Curtain, Doomsday Defense, Da Bears or Gritz Blitz. But the Legion of Boom is on the precipice.

“I think the rules are kind of geared towards the offense to make sure that it’s a points-happy league now,” Wagner said this week. “But I think we’re doing a great job of just adjusting to everything they throw at us. So I’m pretty sure they’re going to throw more stuff at us, and we’re going to be ready. We’re athletes. We make it happen.”

Seattle dropped 35 points on Arizona’s No. 3-ranked defense Sunday in part because Russell Wilson suffered only one sack vs. the seven he endured during the first meeting between the teams. As a result, Wilson completed 20 of 31 throws for 339 yards and two touchdowns.

“He did a good job orchestrating all of the things we asked him to do,” said offensive coordinator Darrell Bevell. “He was on point for the most part with his decisions, with his reads, and he got the ball out quick.”

Except the lone takedown, Wilson didn’t give the Cardinals much of a chance to tee off on him.

Using numbers provided by Pro Football Focus, these are Wilson’s lines when he gets the ball out of his hands in 2.5 seconds or less vs. 2.6 seconds or more:

Wilson did not make the Pro Bowl (he was NFC Offensive Player of the Week twice, including for the Arizona game) despite 20 touchdown passes, a career-low six interceptions, 842 rushing yards (six TDs), and the Seahawks’ 11-4 record. But Wilson might have been a Pro Bowler if he could have delivered his passes all year as quickly as he did against the Cardinals.

According to Pro Football Focus, Wilson takes more time to throw – an average of 3.21 seconds (the point until he attempts as pass, is sacked, or scrambles beyond the line of scrimmage) — than any quarterback in the NFL.

Under all circumstances, Wilson completes 62.8 percent of his throws. But he completes nearly 74 percent with a 113. 2 rating when he delivers the ball in 2.5 seconds or less. How that compares:

“I’m not sure I’m going to get that this game,” Wilson said this week. “Hopefully not — I’ll be out of gas.”

Wilson can take solace in the fact that he will enter the Rams’ game with more rushing yards than the leading rushers on 18 teams, including St. Louis (Tre Mason, 737).