The NFL sent Marshawn Lynch a Christmas greeting — a fine of $11,050 for grabbing his crotch as dove into the end zone Sunday in Arizona. 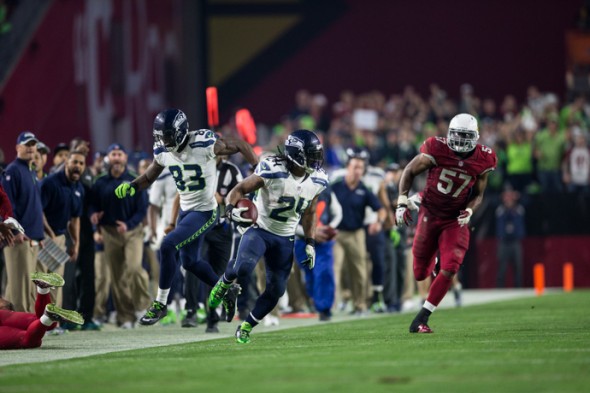 At the end of this spectacular run against Arizona, Marshawn Lynch was fined for unsportsmanlike conduct regarding his entry into the end zone. / Drew McKenzie, Sportspress Northwest

The NFL fined him for silence. Now they fined him for gestures. And they did it on Christmas Day. Soon enough, the league will insist that Marshawn Lynch stop being mean to defenders he keeps throwing away, or risk being fined for littering.

Word came via profootballtalk.com, citing an anonymous league source, on Christmas morning that the Seahawks’ iconoclastic running back drew a fine of $11,050 for unsportsmanlike conduct — specifically, his crotch grab as he floated into the end zone to complete a career-long, 79-yard touchdown run Sunday against Arizona that again left the sports world agape.

Seahawks fans remember that he did the same thing in 2010 after his immortal “Beast Quake” run that beat New Orleans in a wild-card playoff game. There was neither penalty nor fine that time. There was no penalty called by field officials Sunday, but the fine indicates a desire by the NFL to increase its nanny-state profile.

No word yet whether Lynch will appeal on the grounds that he was engaged in an act of player safety, knowing what a high value the NFL places on the health of its employees. Of course, if the NFL was really serious about player safety, they would simply ban Lynch.

Lynch’s deconstruction of the Arizona defense was so compelling that CB Richard Sherman was asked this week if thought he could stop Lynch from scoring.

“I am saying there’s a chance,” Sherman said, grinning. “I would have given a very valiant effort.

“Me and Marshawn have these discussions daily about whether I am able to tackle him or not. But I guarantee you in that situation if I didn’t get him down, I would have gotten him out of bounds.

“You know, he was an inch from out of bounds. яндекс All you had to do was push him. He’s got the best balance ever. But full speed, 200 pounds, what I got would have gotten him out of bounds.”

Asked to describe his view from the sidelines of Lynch’s run, Sherman said, “Shock and awe — then expecting him to keep going, and then more shock and awe. And then anticipation of what he was going to do at the end — and then joy.

“There’s a certain flair to the way he enters an end zone.”

Flair, of course, depends on one’s perspective. They don’t call it the National Flair League.