Three big defensive plays completed the return from the precipice of a Super Bowl hangover to the same postseason spot from which they nailed the Super Bowl a year ago. 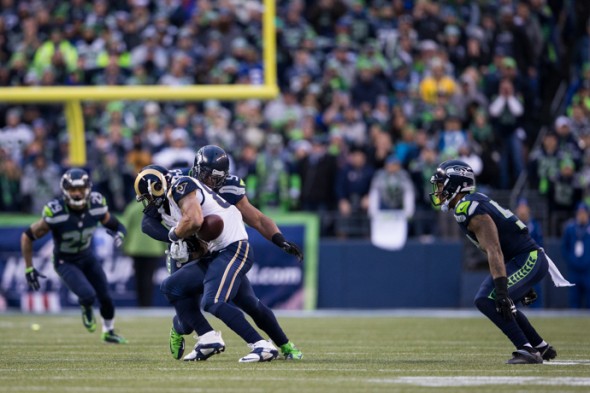 LB Bobby Wagner punches out the ball from Rams TE Lance Kendricks while Bruce Irvin prepares to take it 49 yards for a touchdown Sunday at the Clink. / Drew McKenzie, Sportspress Northwest

Three signs that the Seahawks, one of the NFL’s youngest teams, are maturing into an Alien-style, pitiless machine:

At the accomplishment of the only seasonal goal set by coach Pete Carroll,  Seahawks players Sunday afternoon were as nonchalant as a barber-shop chat about the weather;

New guys like WR Paul Richardson and DT Jordan Hill are nearly the equals of their predecessors in terms of dedication to relentlessness.

The capacity for reinvention. After his airborne recovery of a fumbled reception turned into a 49-yard touchdown run, LB Bruce Irvin was asked if he had a name for his running style. He offered up his giant smile and said: “Bruce Mode!”

After a painstaking 20-6 beatdown of the ever-ornery St. Louis Rams, the Seahawks again are division champs with the coveted No. 1 seed in the NFC playoffs at 12-4, after a 13-3 mark a year earlier.

After a bye, they will play at home one among the Carolina Panthers, Arizona Cardinals and Detroit Lions — all of whom play in the wild card round next weekend — at 5:15 p.m. Saturday, Jan. 10 (FOX).

Coach Pete Carroll was not as casual as his players. He was so loud and proud he broke out a fresh 24-pack of exclamation points.

“All you (media) guys kept talking about how (the Seahawks) can’t do this, (we) can’t get to this point again, and (we) can’t come back!” he said. “That’s what made me more excited about this year than any year I can remember, because . . . what if we could pull this thing together and do something like this?

From their triumphal Super Bowl team, the Seahawks lost 13 starters and reserves in free agency. Another half-dozen starters and reserves were lost to season-ending injuries; others missed long stretches. Carroll and the bosses threw away their most explosive, expensive offensive player, WR Percy Harvin, for almost nothing in return. The franchise was the midseason subject of national media scrutiny after a 3-3 start that even produced a story suggesting QB Russell Wilson wasn’t black enough. (No explanation whether he needed more hip or more hop.)

The NFL booked Seattle a slate of games that qualified at the beginning of the season as the league’s most difficult schedule, particularly the final seven that appeared to include gravel sandwiches at every stop.

The Seahawks responded to the tumult by going 9-1 over the final 10 games. That included a game last week in Arizona that produced a franchise-record 596 yards of total offense, and Sunday a defense that again denied an opponent touchdown. Over the final six games, the Seahawks permitted three TDs, a feat that approaches the frontier of team sports achievement.

For the past three seasons now, the Seahawks have led the NFL in fewest points allowed, a feat last accomplished by the 1969-71 Minnesota Vikings of Purple People Eaters fame, and done only one other time in NFL history, by the Cleveland Browns in the 1950s.

“I think that’s frickin’ awesome,” Carroll said. “A big-time accomplishment . . . there’s a bunch of knuckleheads in that group and they’ve figured out a way to play together in a really historic fashion.”

Then there’s this, from LB Bobby Wagner:

“We still think we have stuff to fix, which is scary.”

Scarier still is that NFC opponents will have to come to Seattle, known to be an unpleasant environment if the wardrobe includes the wrong colors.

“To win the division today and be NFC West champs is a really big deal, because we get to play here in the playoffs . . . to bring it home to the 12s,” said Carroll, fizzing like a shaken soda. “They were just magnificent . . . the whole place was crazy.”

Through the first half, however, they were mostly knotted up. The Seahawks trailed 6-0, their first shutout at the half since 2011. Then the Rams, who beat the Seahawks 28-26 at St. Louis in October, began spitting up.

The Seahawks, who had an interception of Wilson and a fumble lost by Marshawn Lynch in the first half, popped on the board with a field goal. It was set up by a remarkable reception from Richardson, the rookie wideout with much potential who had been mostly quiet. He won a jump ball on the sideline for a 32-yard gain, one of a team-high five receptions in the absence of injured WR Jermaine Kearse.

Another field goal came from the next possession, but it was still 6-6 entering the fourth quarter. On the final period’s first play, the 300-pound Hill reached down to his shoetops for an interception of a pass that Rams QB  Shaun Hill deliberately tried to throw away to prevent a sack.

“I had to get it in the vicinity of a running back,” said Hill. “Their guy made a crazy play.”

Six plays later, Lynch went in untouched for a touchdown from nine yards for a 13-6 lead. Came then another stunner, this one from Wagner, who stripped a reception from TE Lance Kendricks that squirted to Irvin, who went “Bruce Mode” for the 49-yard score.

Then was the exclamation point, typically from the defense. The Rams put together their best drive of the game, 11 plays and 70 yards. On third-and-goal from the Seattle 5-yard line, RB Benny Cunningham took a swing pass and seem destined for the end zone and a large shift in momentum.

But on the half-yard line, he collided with FS Earl Thomas, who stripped free the ball. Because it bounded out of the end zone, the play by rule was a touchback, ending the drive and giving the ball to the Seahawks.

“I don’t know if there’s a more fitting play for a guy,” Carroll said, still fizzing. “What a great play for Earl . . . a sliver of an inch from the end zone. It’s a great way to make the statement of how hard he plays the game. An unbelievable play.”

A fitting description too, for the Seahawks’ final 10 games. They returned from the precipice of the fabled Super Bowl hangover to exactly the postseason place they owned a year earlier.

Football fans know there hasn’t been a repeat champion in the NFL in 10 years. They also know the Seahawks are unlike anything the NFL has seen in 10 years. And opponents know that, in this space, no one can hear you scream.