QB Russell Wilson and LB Bruce Irvin said after Sunday’s victory over the Rams that Seattle is better than the team that won Super Bowl XLVIII. 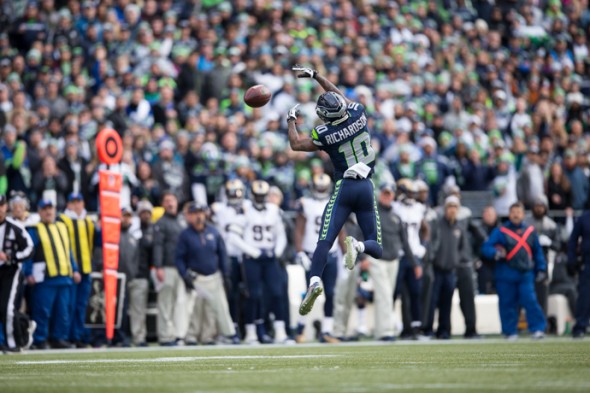 If the 20-6 win over the Rams at CenturyLink Field Sunday felt oddly familiar to Seahawks fans, there are reasons.

The victory marked the second consecutive season Seattle beat St. Louis in its final game of the regular season to clinch an NFC West title and the No. 1 seed in the NFC, earning a first-round bye and homefield advantage up to the Super Bowl.

After beginning the year 3-3 and 6-4, the Seahawks went unbeaten in the final six games against the San Francisco 49ers (2-0), Arizona Cardinals (2-0), Philadelphia Eagles and Rams to finish 12-4. They own tiebreakers over the Packers and Cowboys, both of which went 12-4, and need only two home wins at perhaps the NFL’s most intimidating venue to make a return trip to the Super Bowl.

Behind a talented defense, the Seahawks might be better than last season, when they went 13-3 before winning the Super Bowl. At least, QB Russell Wilson seems to think so. After Sunday’s win, he said he would take this year’s team in a head-to-head matchup against the 2013 Seahawks.

“I think to come back and show the resilience that we’ve had, and the type of players that we’ve have, I’m in this year,” Wilson said. “I’m in right now. So, I would pick this team.”

After jettisoning WR Percy Harvin, the Seahawks returned to a ground-and-pound offensive style and relied on defense, which ranked first in the NFL in fewest points allowed for the third consecutive season. That feat that hadn’t been accomplished since the Minnesota Vikings teams of 1969-71, known as the Purple People Eaters. The Cleveland Browns also did it during the 1950s. But that’s it.

On the first play of the fourth quarter, DT Jordan Hill, on a busted screen play, made a diving, game-altering interception on pass that QB Shaun Hill intended to fall incomplete. The Seahawks capitalized when RB Marshawn Lynch gave Seattle its first lead with a nine-yard touchdown run. 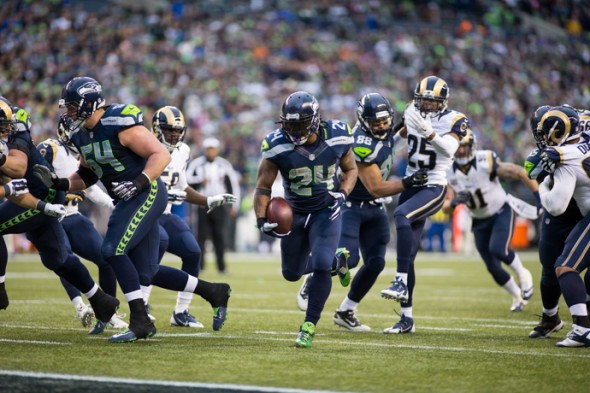 Lynch had 14 carries for 60 yards and a touchdown and had three catches for 36 yards. / Drew McKenzie Sportspress Northwest

Later in the fourth quarter, Pro Bowl MLB Bobby Wagner jarred free a Shaun Hill pass intended for TE Lance Kendricks. The ball careened to Seahawks LB Bruce Irvin, who returned it 49 yards for a touchdown. It was Irvin’s second pick six of the season and perhaps, the biggest play of his NFL career. 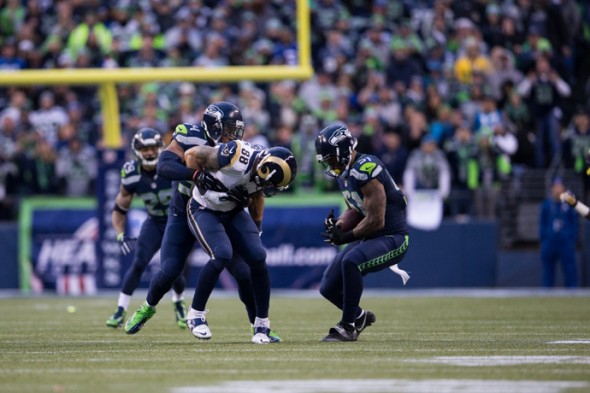 Irvin, a former defensive end with uncanny speed for his position, after the game referred to his running style as “Bruce Mode.” Fittingly, Irvin was the first round selection in the 2012 Seahawks draft that was almost unanimously chided by analysts.

“I don’t think I’ve been part of a group as connected as I am with these guys — it’s a brotherhood around here,” he said. “I’ve said it every week and I’m going to keep saying it, right now we’re playing better than we have all of last year. Guys are putting their egos to the side, guys are buying in and playing for one another. You don’t find that around the league.” 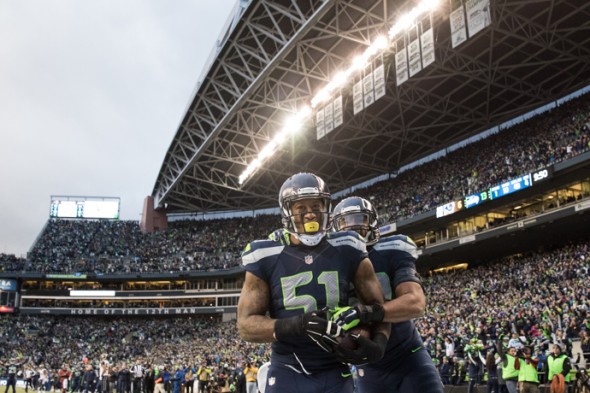 Irvin, a former first round pick, is having his best year after switching positions following his 2012 rookie campaign. / Drew McKenzie, Sportspress Northwest

The Seahawks host the NFC divisional round game Jan. 10 (5:15 p.m. PT, FOX), where they face the lowest-seeded team after this week’s wild card round. The No. 2-seeded Packers, also recipient of a bye, play the highest remaining seed in the divisional round Jan. 11 at Lambeau Field (10:05 a.m. PT, FOX).