The Seahawks allowed three touchdowns and 39 points in their final six regular-season games, one of the great late-season finishes in modern NFL history. 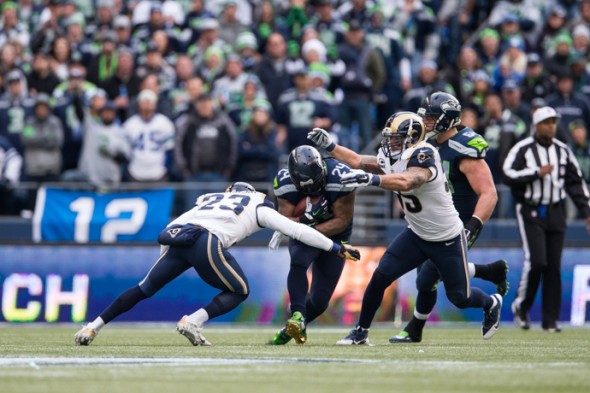 Marshawn Lynch and the Seahawks made up a three-game deficit to win the NFC West with a 12-4 record. / Drew McKenzie, Sportspres Northwest

There are numerous reasons why the Seahawks (12-4) will enter the playoffs two weeks hence as the NFC’s No. 1 seed. But the main one is that during their regular season-ending, six-game winning streak, they allowed opponents only three touchdowns — or one every eight quarters, and 39 points. To borrow a phrase used Sunday by Pete Carroll after the 20-6 win over the Rams, “That’s frickin’ awesome.”

But exactly how frickin’ awesome is it? Prior to this season, the fewest points permitted by the Seahawks in the final six games of a regular season was 72 by last year’s Super Bowl champions. Chuck Knox’s 1990 team surrendered 80 in a 5-1 season-ending run, and Carroll’s 2012 club and Mike Holmgren’s 2005 Super Bowl runner-ups both ceded 84.

“There was an emotional change,” Carroll said Sunday when asked how the Seahawks could allow 21.5 points per game through their first 10 and 6.5 over their final six. “You can look at all the Xs and Os, and all the other stuff. But an emotional shift took place. The guys took hold, it made sense to them that we had to make a shift, and they proactively got it done.

“We were lagging behind our performance level. We just kind of got waylaid along the way and had things going on in the team (Carroll didn’t elaborate on what those things were) that we needed to overcome and grow through, and we did.

“It was almost the ninth game when it happened, almost the midway point of this year. It happened last year, too. We went through the same thing. This is not new. But the players got this done. I’m just thrilled to see the shift because it’s so obvious that we’ve taken things to a whole different level.”

Few teams have played defense at this level. The 1985 Chicago Bears featured what many claim is the best defense in the past 30 years. They allowed 71 points in their final six, compared to Seattle’s 39. Two other defenses in the “greatest-ever” conversation, the 2000 Ravens and 2002 Buccaneers, allowed 60 and 77, respectively.

Go back to the beginning of the Super Bowl era (1966). Only seven teams allowed fewer than 50 points in their final six regular-season games:

By allowing the Rams six points and 245 yards, the Seahawks became the fourth franchise since World War II to lead the NFL in fewest points (15.9) and yards (267.1) allowed in consecutive seasons, and the first since the 1985-86 Chicago Bears. They also became the third franchise, following the 1953-57 Cleveland Browns and 1969-71 Minnesota Vikings, to lead the league in scoring defense at least three years in a row.

With it not only comes a first-round bye but home field advantage throughout the playoffs. Two good reasons why the Seahawks can celebrate not having to go through AT&T Stadium in Dallas or Lambeau Field in Green Bay:

A winner of five of its final six, Dallas scored 41.3 points per game in December, tying an NFL record for the month by the 1982 “Air Coryell” San Diego Chargers.

The Seahawks lost to the Cowboys 30-23 at CenturyLink Field Oct. 12, largely because Dallas converted a 3rd-and-20 in the fourth quarter that led to the winning touchdown. But Seattle defeated all four teams — San Francisco (twice), Arizona (twice), Washington and Philadelphia — that beat Dallas.

Green Bay went 8-0 at Lambeau this season. In those eight, Aaron Rodgers threw 25 touchdown passes without an interception and the Packers scored 39.7 points per game.

After starting 3-3 and then 6-4, the Seahawks won nine of 10, including six consecutive to end the regular season and capture the NFC West title at 12-4. The Seahawks had to power through Arizona twice, San Francisco twice, win at Philadelphia, and then close out against always-irksome St. Louis. Along the way, the Seahawks made up a three-game deficit in the division race. The rarity of such a feat:

Since 2002, when the Seahawks moved from the AFC West to the NFC West, there have been 104 division races across both conferences. The leaders entering Week 11 (Arizona in the NFC West this year), went on to win division championships 91 times – 87.5 percent.

No team that trailed a division leader by as many as three games entering Week 11, as did the Seahawks, rebounded to finish first. In fact, only two – 2008 San Diego Chargers (AFC West) and 2012 Washington Redskins (NFC East) – even made up a two-game deficit to win a division race.