Despite the first-half shutout Sunday, Seahawks are the NFL’s ninth-ranked offense. And that’s with 4th-stringers at TE and C. Bouquets to the backups. 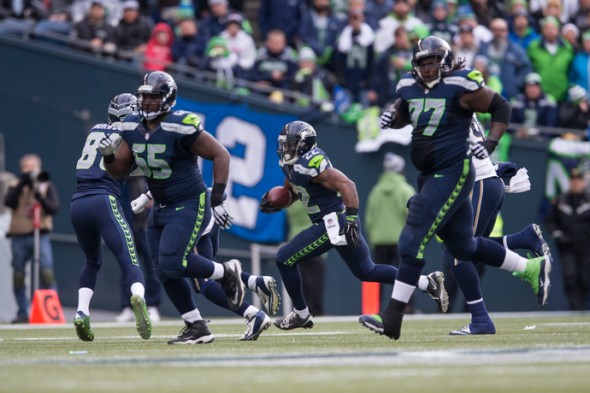 Feel free to rub your eyes in disbelief, but the Seahawks offense you saw get shut out in the first half Sunday against St. Louis was the ninth-best in the NFL this season, by the measurement of yards per game. That’s right: The No. 1 defense in the NFL now is paired up with a top-10 offense.

The Seahawks needed many new players just to stay close to even with last year. In fact, given the replacements, the offense should have regressed, particularly when they had to start a not-ready-for-prime-time rookie, Justin Britt, at right tackle.

Sure, every team loses free agents, has injuries or suspensions or other drama. But the Seahawks somehow improved statistically despite not adding a single offensive player whose production was noteworthy.

At times, including Sunday, the Seahawks were down to fourth-stringers at two positions: Center, where Patrick Lewis followed Max Unger, Steve Schilling and Lemuel Jeanpierre, and tight end, where Tony Moeaki followed Miller, Luke Willson and Cooper Helfet.

Then there’s Will Tukuafu, the 285-pound fullback/defensive lineman, who had his first carry Sunday, a third-down run for four yards and a first down.

“His effect has been obvious from the beginning — a 285-pound fullback?” Carroll said, grinning. “That’s pretty cool. He lays the wood.

“He contributes on special teams, he plays defense — we work him right into the rotations when we need him. That’s unique. He’s a remarkable kid. He’s really fit in well, he’s tough as nails, and he’s really been a great addition.”

Lewis, Jeanpierre, Moeaki and Tukuafu were midseason pick-ups off the street or practice squads, and yet they were part of of the single greatest day in Seahawks offensive history — the 596 yards at Arizona 10 days ago.

Obvious as are the virtues of Russell Wilson, Marshawn Lynch and Doug Baldwin, it’s a testament to Carroll and his staff that they can get close to average NFL performances out of guys who might be driving the team bus as much as riding in it.

“The thing that stands out the most is I think the coaches did a really good job of developing the backup guys,” Carroll said. “When the time came for them to be called on, we didn’t lose anything. We didn’t have the continuity in the offensive line much of the year. I think (assistant Tom Cable) did a great job fitting guys together and making it work. We led the league in rushing and that’s hard to do. A lot of guys contributed.”

Critical was the ability of GM John Schneider and his scouting staff to turn over the right rocks.

“I think it’s also a statement about John’s work on the roster to make sure we have great depth,” he said. “We lost a lot of guys — I think we had 16 or so guys who were on injured reserve during the course of the year.

“We weren’t free of injury (as was largely the case the previous season). But we had very good fortune with the guys stepping up and making plays and the young guys coming through.”

When the NFL landscape is scanned in December, casualties lay thick. Freakishly, the Seahawks stand a small chance of having everyone on the 53-man roster (not counting the season-ending injured-reserve list) healthy by the playoff game Jan. 10.

The more obvious uptick in late-season intrigue is rookie WR Paul Richardson, who in the past two games had 10 catches after 19 in the previous 14. The injury absence of WR Jermaine Kearse provided the opportunity for a breakthrough Sunday, particularly on one play — a leaping, 32-yard catch along the sideline that required Wilson to believe in Richardson’s ability to fetch a 50-50 ball over good coverage.

“He’s much more comfortable with what we’re asking him to do,” Carroll said. “Russell is really comfortable with him. Russ really can feel him on his routes. They’ve timed up a lot of things in the last month or so that have looked really high class for us.

“We’re really growing with him and we think we’ve got a really good player there.”

Carroll has said all along that playing young guys early in their careers, as well as early in individual seasons, pays dividends late. The proof is rolling out weekly during Seattle’s playoff run of nine wins in 10 games when the obscure get center stage, if only for a play or two.

One more believe-it-or-not stat: The Seahawks had 174 fewer penalty yards this season than last season. The new guys even know how to play by the rules.