The Mariners pulled the trigger on the Seth Smith trade Tuesday, acquiring the San Diego outfielder in exchange for 24-year-old RHP Brandon Maurer. 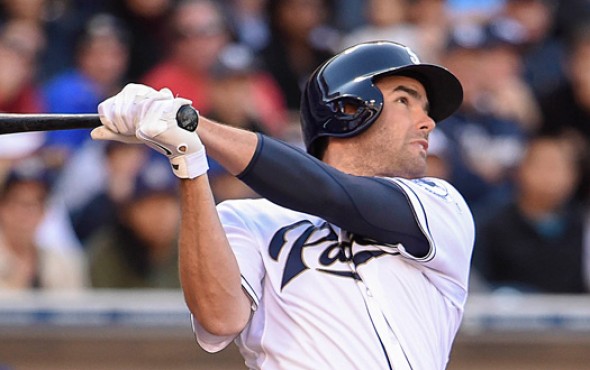 Continuing to re-invent themselves for 2015, the Mariners Tuesday traded RHP Brandon Maurer to the San Diego Padres for OF Seth Smith, a 32-year-old platoon outfielder they need to complement Justin Ruggiano, whom they acquired in a trade with the Chicago Cubs Dec. 17.

Smith is expected to get most of his starts in right field. Adam Lewis first reported on the potential trade for sportspressnw.com earlier Tuesday.

The left-handed hitter appeared in 102 games in left field (81 starts) and 43 in right (37 starts). His 2.6 wins above replacement was the second-best of his career.

“He doesn’t strike out a ton. He knows how to walk. He can give you a good AB,” Zduriencik said. “His on-base percentage this year was .367. He had a really good OPS. We think it’s a really nice fit for our ballclub.”

“It was a tough decision to trade Brandon,” said Zduriencik. “We think a lot of him. We know his value. We know his upside. He is a guy that I would have loved to hold on to. I think the issues with some of the (other) deals we were talking about, it was going to require multiple players . . . It’s no secret of where our offense has been the last few years.”

Maurer was selected by Seattle in the 23rd round of the 2008 amateur draft out of Orange Lutheran High School (Orange, CA.).

“We clearly think he can be with us for a few years, and we’re happy with that,” Zduriencik said. “That was a big component in the deal, getting someone that has the potential to be here for at least two years or possibly three. Or more.”