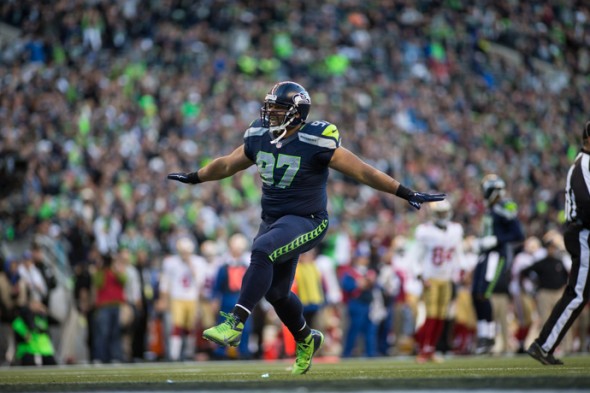 Seahawks DT Jordan Hill has emerged as a key run-stopper and pass-rusher after his NFL career got off to a slow start. / Drew Sellers, Sportspress Northwest

RENTON — As with many college football fans, Seahawks DT Jordan Hill this past weekend watched from home as his alma mater played in a bowl game. For Hill, a Penn State graduate, the experience carried extra emotion.

Facing Boston College in the Pinstripe Bowl, the Nittany Lions rallied from a 14-point, third-quarter deficit to win 31-30 in overtime after the Eagles missed an extra point try on their first possession of overtime.

No, Hill hasn’t lost his connection to Penn State.

In 2012, he was ready to enter his senior year when the NCAA imposed severe sanctions on the school for its involvement in the Jerry Sandusky child sex-abuse scandal. Hill stuck out the year as the Nittany Lions finished 8-4.

Though they finished 2014 at 7-6, Penn State’s latest win was important for a program playing in its first postseason game since the NCAA lifted its bowl ban.

Hill, who went to high school in Steelton, PA., was “as happy as ever.”

“I give them a lot of credit,” he said Wednesday. “All of us players that played there went through that whole situation, from my senior class to the guys who were freshman at the time . . . it feels good.”

Hill has a lot to feel good about these days.

A third-round pick by Seattle in the 2013 NFL draft, Hill is drawing increasing praise from teammates and coaches after emerging as a key run-stopper and interior pass rusher over the final month of the regular season.

“I think Jordan’s playing very well at the time we need him to play well. Now is the perfect time for him to be hitting his peak and playing at a high level. I’ve seen so many great things from him, whether it’s the run or whether it’s the pass, getting an interception, just making big plays for us.”

In the fourth quarter of the 20-6 win over the Rams Sunday, Hill made a lunging interception when QB Shaun Hill tried to throw away a screen pass at the feet of his running back. Hill ran it back eight yards. Staked a short field, the Seahawks went on to score the go-ahead touchdown.

It was a fitting example of the defensive tackle’s athleticism. Hill is listed at six-foot-one, 303 pounds, but the play resembled a play a defensive back might make.

“Their guy made a crazy play on it,” Hill said afterward.

But during the second half, Jordan Hill sprained his knee jumping to bat down a pass. With the Seahawks off during the wild card weekend, he has a chance of returning for the NFC divisional round game Jan. 10 at the Clink.

“We’ve got to see how it goes,” coach Pete Carroll said Monday.

Hill would provide the Seahawks a boost.

After playing in four regular season games as a rookie, in part because of injuries, Hill finished the 2014 regular season with 5.5 sacks, teaming with veteran NT Kevin Williams to provide inside pressure for the NFL’s No. 1 defense in points allowed and yards.

In his past four games, Hill has 4.5 sacks. In turn, the Seahawks pass rush has flourished after a slow start to the season.

“He really caught on late in the year to become more effective — he took over that role that McDonald did last year and we had hoped that he could contribute like that,” coach Pete Carroll said Monday. “It worked out. It would be a big deal if we don’t have him. He’s really become a good part of the four-man rush.”

The soft-spoken Hill credited Bennett for helping him work on his technique at practice. Veteran DT Brandon Mebane, on injured reserve with a hamstring injury, has also provided Hill guidance, along with defensive line coach Travis Jones.

“I have to give Mebane some credit too. He’s definitely helped me,” Hill said. “When he’s in meetings, he’d always be telling me this is what you gotta do, this is how you do it.”