The two biggest play’s in Sunday’s victory in came from a tactic the Seahawks practice regularly — the six-inch punch. They learned it watching kangaroo videos. 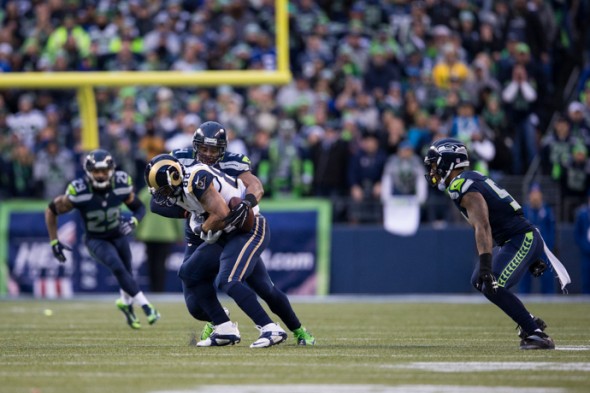 With his right shoulder and hand, Seahawks LB Bobby Wagner punched the ball free from St. Louis TE Lance Kendricks, then peeled it out with his left hand. Teammate Bruce Irvin awaited the loose ball, which he grabbed for a touchdown. / Drew McKenzie, Sportspress Northwest

After the Seahawks won the Super Bowl, the NFL changed some rules regarding how defenders were allowed to engage ballcarriers. The Seahawks were certain it was because of their success. It didn’t work — the Seahawks are back in the playoffs, atop the defensive stats, with the shorter route to the Super Bowl.

If the Seahawks win again, maybe the rules will change again. Perhaps, following the victory Sunday over St. Louis in which arguably the two biggest plays were strips of the ball from Rams’ ballcarriers, they will outlaw the six-inch kangaroo punch.

At least, that’s what I’m calling the short jabs the Seahawks practice in order to dislodge the ball.

“I can’t tell you the drills because then everyone would be doing them,” said DE Michael Bennett. But LB Bobby Wagner was more forthcoming about how they learn: From some non-football videos prepared by Rocky Seto, the defensive passing game coordinator.

“Rocky does a great job of showing us videos every week of what other teams have done — and other things, like ninja videos, kangaroos punching each other, rams butting heads,” Wagner said this week, grinning. “We don’t know what’s coming, then we see this kangaroo punching another kangaroo and knocking him out.”

No kidding. Kangaroos. As in the video above. I don’t know if that was a part of the Seahawks video library; I defer to Seto’s archival research. But coach Pete Carroll offers a total buy-in to go Wild Kingdom in his search for an edge.

“It’s a technique of striking that is used in a lot of aspects of the animal kingdom, we’ve found,” Carroll said Monday. “Whether it’s a kangaroo or a ram head-butting, we look for that six-inch punch.”

He elaborated, describing shoulder punching as way for a tackler’s body to apply force upon the ball.

“I know it’s a unique term and phrase that you don’t know anything about,” he told reporters. “We’re a shoulder-tackling football team. There’s an ability to strike with your shoulder that adds an additional punch. It’s not just the punch you would think with your fist. We’re attacking the football all the time.”

As a “perfect example,” he cited Wagner’s tackle of Rams TE Lance Kendricks in the fourth quarter Sunday, which resulted in a free ball that teammate Bruce Irvin grabbed on the fly and returned 49 yards for the game-breaking touchdown in the 20-6 win that clinched the NFC West title.

On the next series, another punch, more like a karate chop, decided the game. The Rams put together their best drive of the afternoon, 11 plays over 70 yards that reached third-and-goal at the Seattle 6-yard line. Rams QB Shaun Hill found RB Benny Cunningham unmarked in the flat, and he seemed destined to score after the reception.

Until FS Earl Thomas, apparently using a jet pack, appeared from nowhere to launch airborne against the airborne Cunningham, whose attempt to extend the ball over the plane of the goal was met with a hack that sent the ball out of the end zone for a touchback that gave the ball to the Seahawks.

Two punches, and the Seahawks were the No. 1 seed again.

“Earl went a little more open-handed with his six-inch punch, kind of a karate chop thing that knocked the ball out down by the goal line,” Carroll said. “Those are both prime examples of the power of the six-inch punch.”

Then Carroll, seemingly a little abashed he was talking locker-room tactics, was done: “Next topic,” he said.

Clearly, he was excited about talking of another edge the Seahawks have developed. In the view of Bennett, such things are necessary because the game has changed so heavily in favor of the offense.

“I think the league is set up as a fantasy football league (for scoring offensive points),” he said. “(Detroit Lions DL Ndamukong Suh) gets fined because the guy he’s stepped on is a quarterback. On the D-line, people always stepping on you. Something’s always happening to you, but nobody cares because you’re a D-lineman.

“If I get knocked to the ground, the referee steps over me and says, ‘It’s part of the game.’ If Peyton Manning falls down, the referee helps him up.

“I thought everybody was equal. But that’s a lie.”

By the time Bennett’s soliloquy was over, reporters were  laughing, knowing he just delivered journalistic frankincense and myrrh on a slow bye/holiday week.

More punch lines, however, must wait until the playoff game Jan. 10.