Olklahoma State (6-6) had a rough season and is on its third QB, a freshman. Washington (8-5, 4-5) will be looking to sack the daylights out of the kid. 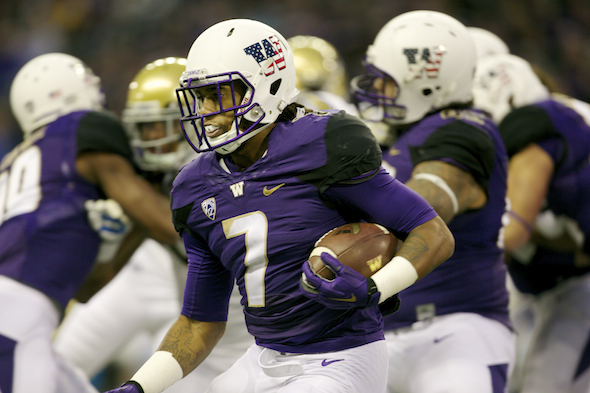 Shaq Thompson could be playing his final game for the Huskies Friday night in the Cactus Bowl. / Drew Sellers, Sportspress Northwest

The Cactus Bowl matchup between Washington and Oklahoma State came within minutes of not happening. The Cowboys trailed Oklahoma late in the fourth quarter Dec. 6 and were on the verge of ending their season one win shy of bowl eligibility, but suddenly rallied for an improbable overtime victory.

With a minute to play in regulation, Oklahoma State’s Tyreek Hill returned a punt for a touchdown to force OT, where the Cowboys won 38-35. That not only snapped a five-game losing streak, longest by any 2014-15 bowl team, it creates a dilemma for Cactus Bowl forecasters, perplexed as to which Oklahoma State team will show up against the Huskies: The one that nearly upset No. 1 Florida State to open the season or the one with five losses in a row that eked into a bowl game.

“We had a tough season,” Gundy said this week after arriving in Tempe. “The majority of the team we have out here won a lot of football games over the last five or six years. Then we went through a stretch where we were outmatched at times, and it was difficult for our team.

“But to come back and win on the road at Oklahoma, being down by 14 points in the fourth quarter, it lit a fire under these guys. We’ve had really good practices since then.”

Hill, the hero of the Oklahoma game, hasn’t been part of them. A week after accepting the Cactus Bowl invite, Gundy threw Hill off the squad for allegedly punching and choking his pregnant girlfriend.

“The energy level we got from beating Oklahoma has not been diminished,” said Gundy, “but this incident with Hill was just a shot in the gut for all of us. It’s hard on the players now.”

Gundy is on his third quarterback. Freshman Mason Rudolph started the past two games after J.W. Walsh and Daxx Garman were sidelined with injuries, and has energized the Cowboys with 554 yards and four touchdowns. But Rudolph completed 53 percent of his passes with three interceptions. Gundy said that protecting Rudolph will be the major challenge.

Oklahoma State’s offensive front is one of the worst in the nation at protecting the quarterback — it ranked 112th in NCAA sacks allowed (37) — and will be facing one of nation’s best at getting to the quarterback. Washington ranks third nationally in  sacks (49), leads in defensive touchdowns with seven and is fifth in fumbles recovered with 15.

“Washington is a good football team,” Gundy said. “They’ve lost to five ranked teams, all good opponents. They are very well coached. Defensively, they’ve got a couple players that are very, very highly regarded. They can run, tackle, can blitz, and can make some plays.”

Given that they are all potential first-round draft picks, this will probably be the last game at Washington for senior LB Hou’oli Kikaha (18 sacks), junior LB/RB Shaq Thompson, the Paul Hornung Award winner as the nation’s most versatile player, and junior DT Danny Shelton, all selected first-team All-America by The Associated Press.

Washington will be looking to close out Chris Petersen’s first year with a three-game winning streak.

“I think we’ve had good preparation,” said Petersen. “I think the kids have worked hard and stayed focused. The big thing right now is how that translates after having such a long time off. It seems like when you watch the bowl games, there’s some adjustment periods. One team really comes out fast and the other team gets on its heels. Obviously, we want to come out fast.”

A lot will depend on how QB Cyler Miles responds. Miles had an efficient season with a 66.7 completion percentage and 16 touchdowns and three interceptions. But his production ebbed against better opponents. He averaged 155 yards passing with two TDs and an appallingly low 5.7 yards per completion in Washington’s losses.

With Oklahoma State likely to stack the box against the run, Miles needs to beat the Cowboys downfield – something he hasn’t done all year.

“Over the last third of he season, he was a little better in the pocket,” said Petersen. I think he anticipated and saw things a bit cleaner and a little bit faster. He’s just got to trust those holes a little bit more, and throw it in there on time.”