The Panthers and Seahawks have played the same kind of game the past three meetings, all Seahawks win. But this one’s at the Clink. Another wreck for Newton? 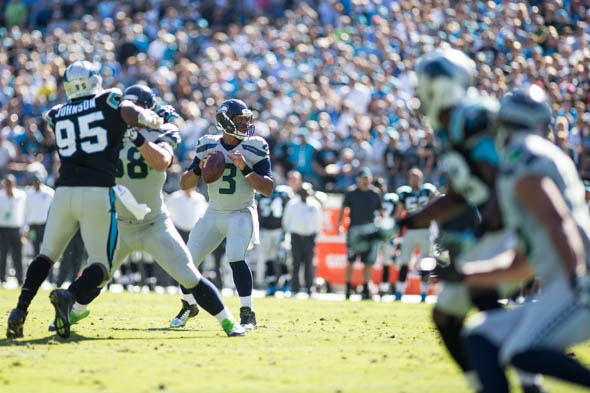 The Seahawks will say it makes no difference whom they host at 5:15 p.m. Saturday, and that’s largely true. But since the choice heading into the playoffs’ wild-card weekend was the 11-5 Detroit Lions or the 7-8-1 Carolina Panthers, they can thank the Dallas Cowboys — and a bewildering officiating call — for making their road a tad fluffier.

The Cowboys’ 24-20 win Sunday that eliminated the Lions, thanks in part to a pass-interference penalty against Dallas that was belatedly withdrawn without explanation, sent the NFC South champion Panthers against a team they have played well enough — but cannot seem to beat no matter how intensely they scuffled.

The aggravation was palpable after the Seahawks’ Oct. 26 game in Charlotte, when the 13-9 triumph followed a pattern of the two previous games between the teams, 16-12 and 12-7, both Seahawks’ wins on the road.

“Man, I’m telling you, it’s just the Achilles’ heel, man,” Panthers CB Josh Norman told reporters. “They keep nagging us. They end up making one more play than us, every single time.”

Actually, it was a few plays in a row, all on the Seahawks’  last possession, that skewered the Panthers. The ninth and final play of an 80-yard drive became the game’s only touchdown with 46 seconds left when QB Russell Wilson hit TE Luke Willson with a 23-yard pass.

The triumph ended the Seahawks post-Harvin-trade swoon at two losses in a row and began a run that has reached nine wins in 10 games.

“It was a huge win because of the fashion we won it,” said Wilson post-game. He overcame multiple earlier mistakes to be flawless in the final drive. “The game on the line with three, two, one minute left — that’s all I can ask for.”

The game was a pivot point for Seattle, because national scrutiny had fallen upon the defending champs for their sluggish 3-3 start. Media stories sprouted that questioned team harmony, the relationship between RB Marshawn Lynch and coach Pete Carroll, and the issue of Wilson’s leadership and whether, as anonymous sources claimed in one story, Wilson “wasn’t black enough.”

The Carolina win started the turnaround that catapulted the Seahawks into the No. 1 seed, from where they watched in a bye week their potential foes beat up one another.

“People were trying to distract us with stories that we’re not together,” Wilson said. “We’re probably the closest we’ve been. There’s been no distraction at all. People keep finding ways to knock us down. But we keep believing in each other.

“Not black enough? I don’t even know what that means. I’m an educated male who’s not perfect. I’m just trying to lead us to win football games. We’ve lost some tough games against good football teams. We could have been 6-0.”

For Carolina, the loss was one of six consecutive that averaged nearly a 15-point margin of defeat. That’s part of why the NFC South became a national laughingstock, producing in Carolina a champ with a losing record.

Of course, no one in Seattle is snickering, because in 2010 it was the Seahawks who were the first division titlist in NFL postseason history to have a losing (7-9) record. That was coach Pete Carroll’s first season in Seattle, and he helped engineer the “Beast Quake” upset of the defending champion New Orleans Saints.

The comparison will be offered up numerous times this week as an anti-smugness treatment suitable for all 53 players. And the Panthers can offer up their own, more recent history. They won their final four regular-season games, then Saturday crushed Arizona 27-16 by allowing the Cardinals a playoff-record-low 78 yards of total offense.

It was the franchise’s first playoff win in nine seasons.

Again, the Panthers were at home. And they picked on Arizona’s third-string QB, Ryan Lindley, as did the Seahawks two weeks earlier in a 35-6 win. And it also must be noted that none of the Panthers’ final four regular-season wins came against a team with a winning record. In factm their cumulative record was 22-42.

So they are 11-point underdogs for a good reason. Perhaps the biggest reason is that QB Cam Newton has never played well against the Seahawks. The October game was another example: 12 completions on 22 attempts for 171 yards and a passer rating of 61.0. He managed only 24 yards on 12 carries, with a long run of eight yards. That was his best of his three games against Seattle as starting QB.

And the Seahawks had all three of their sacks in the final seven minutes.

“We did a great job scheme-wise to make sure it didn’t come easy for them,”  Carroll said in October. “Sometimes their plays are so easy (for Carolina) because there is so much space around the quarterback when he’s making his reads. But our guys stayed with it. We kept him under wraps because they couldn’t do (much) consistently.”

Newton was involved in a rollover car accident Dec. 9 near the stadium when a speeding  driver ran a red light. He came out without serious injury. Saturday, his left ankle was stepped on, and he limped some. But Newton figures to be ready. Carolina doesn’t need him to be perfect to stay close.

The Panthers were 10th in the NFL in defense at 340 yards per game (the Seahawks were No. 1 at 267), but picked up late in the season behind MLB Luke Kuechly, who joined Seahawks MLB Bobby Wagner on the All-Pro team last week.

When the teams first met, Wagner and CB Byron Maxwell were out with injuries and SS Kam Chancell0r was subpar with ankle problems. They’re all back healthy now, and backed by 68,000 fairly audible people.

It figures to be another defensive fist fight — Carroll’s favorite.

“We don’t have problems playing a game like that with our defense,” Carroll said in October. “We stayed with the game plan and slugged it out.

“The finish was a surge. They sensed an opportunity to win. It was a beautiful thing to see.”

Carolina scored a field goal in the fourth quarter. That was three more points than the Seahawks have given up in the past six fourth quarters total. The potential is there for another car wreck, this one without air bags.