Former Mariner Randy Johnson is expected to receive more than 90 percent of the vote and enter the Baseball Hall of Fame Tuesday on the first ballot. 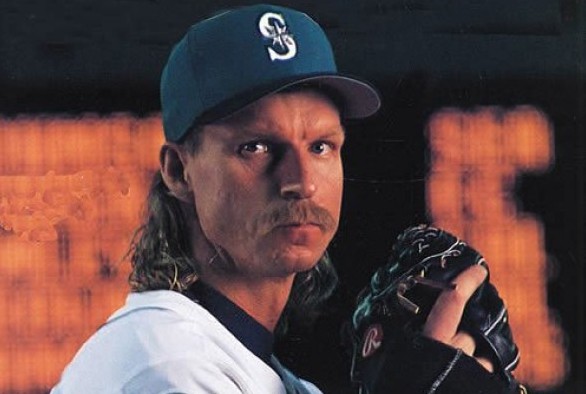 In 1997, the Mariners conducted an impromptu promotional event, asking fans to arrive at the Kingdome garbed as their favorite players. Around 4:30 one mid-summer afternoon, dozens of Randy Johnson look-alikes began filtering into the Dome. A few of them, replete with shoulder-length mullets, were pretty close to dead ringers for the Big Unit, though none matched his 6-foot-10 stature.

Later, during batting practice, Johnson sat down next to a reporter on the bench in the Mariners’ dugout, staring straight ahead, not acknowledging the scribe an iota.

“Did you see all those Randy Johnson look-alikes out there?” the reporter asked, assuming that Johnson, like most people, would have a natural curiosity. But Johnson wasn’t most people.

“No, not interested,” he replied curtly. “I’m pitching today.”

When Johnson’s turn in the rotation arrived, he was so dialed in that his gaze intimidated all life forms in his area code. As one of his managers, Bob Brenly, once said (Lou Piniella held the same view), “We knew that every fifth day we were going to get one of the most competitive efforts in the history of the game. He pitched every game like it was the most important of his life.”

With that attitude, which translated into 303 wins and 4,875 strikeouts (Felix Hernandez isn’t even halfway yet to either number), Johnson is a shoo-in for induction Tuesday when the Baseball Hall of Fame announces its Class of 2015. The only question is the percentage of the vote, and it’s difficult to believe Johnson’s won’t receive north of 90 percent (75 percent required).

In July, MLB.com polled 40 members of the Baseball Writers Association of America and asked what their 2015 ballots would look like. Johnson topped the list at 97.5 percent. If that number holds, Johnson will enter Cooperstown with the third-highest percentage in history for a pitcher, trailing Tom Seaver (98.8) and Nolan Ryan (98.7). For additional perspective, Babe Ruth received 95.1 percent.

Tuesday could have been a major celebration day in Mariners history. But the club lost the opportunity to claim Johnson exclusively as a Hall of Famer on July 31, 1998, when it dispatched the Big Unit to the Houston Astros for prospects Freddy Garcia, Carlos Guillen and John Halama.

At the time, Johnson looked only a bit like the future Famer he would become, a circumstance stemming from the club’s nearly year-long angst over and ultimate refusal to make a long-term investment in a 35-year-old power pitcher with a surgically repaired back.

Entering his 1998 contract year, Johnson was coming off a 20-4, 2.28 ERA season and wanted a new deal. After a decade with the team, Johnson thought the Mariners owed him that much. When they hemmed, Johnson went into a prolonged pout that compromised his pitching. In 23 starts leading up to the trade deadline, Johnson posted an uncharacteristic 9-10 record and 4.33 ERA – that after he had lost six of his previous 74 starts dating to 1995.

After Johnson allowed 11 runs in back-to-back losses July 22 and July 28, the Mariners pulled the trigger, sending him to the Astros. In 11 starts for Houston following the trade, a re-invigorated Johnson went 10-1 with a 1.28 ERA and was the principal reason the Astros won the NL Central. Johnson was also a big reason why the Mariners, despite 56 home runs from Ken Griffey Jr. and 42 from Alex Rodriguez, missed the postseason.

Based on talk-show sentiment of the day, most Mariners fans, appalled at Johnson’s half season of petulance, adopted a good-riddance attitude despite his decade of heroics. The Mariners had a more practical concern: Getting stuck with with paying dead money as Johnson aged. They weren’t alone.

Just about every baseball actuarial table without Nolan Ryan’s name on it confirmed the view that 35-year-old power pitchers were not worth lengthy investments. All kinds of data backed that up.

As we know, the Mariners did okay with Houston’s prospects. Garcia became an All-Star and an American League ERA leader, Guillen an everyday shortstop and Halama a fairly effective reliever/spot starter. They had made far worse trades. But . . . turning actuarial tables upside down, Johnson’s career had much left.

The four post-Mariner Cy Young awards all came when Johnson pitched for the Diamondbacks between 1999-02. Johnson also won a World Series ring (and Series MVP award) for them in 2001, ironically in the one year the Mariners, with 116 regular-season victories, had their best chance to win the World Series.

The expectation is that when Johnson poses for photographs Tuesday, he will sport a D-Backs cap: His greatest success, after all, came in Arizona, where he still resides.

Johnson is responsible for some of the most memorable moments in Mariners history, probably topped by his 9-1 AL West clincher against the Angels in 1995 that set in motion plans to build Safeco Field; his major league record 16-game winning streak from Aug. 11, 1995 to May 2, 1997; the two 19-strikeout games in 1997, and a personal favorite that illustrates how overpowering he could be.

In a 1997 game against Texas in the Kingdome, Johnson threw one of his famous “Mr. Snappy” sliders to Dean Palmer of the Rangers. Palmer swung at — and missed – the pitch after it bent so far that it plunked him in his left rib cage.

The Mariners might not have won a World Series with Johnson, but they would have had a far better chance with him in 2001 when he took the fourth of his Cy Youngs. They probably would have made the playoffs in 2002 and 2003 had Johnson been in the rotation. The Mariners finished a combined 13 games behind in those seasons while Johnson racked up 30 wins in Arizona, 24 of them in 2002.

As Tuesday approaches, the Mariners must have mixed feelings about Johnson’s impending election. They received 10 remarkable years from the Big Unit, but — and it’s hard to fault them — the Mariners ultimately traded a future Hall of Famer as he was approaching the prime of his career.

Instead of being able to claim Johnson as the first long-term member of the franchise to enter the Hall of Fame, the Mariners instead will have to make do as one of Johnson’s many stepping stones.