Seahawks Earl Thomas and Marshawn Lynch had no relationship until this year. Now, their stares into each other’s eyes radiate intensity. 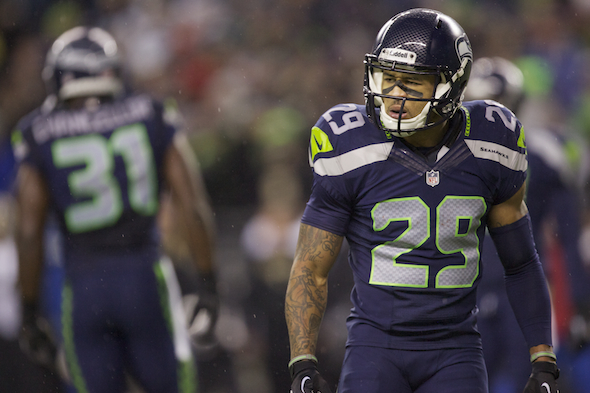 To say Earl Thomas in intense is to say water is wet. / Drew Sellers, Sportspress Northwest

I described the scene to LB Bruce Irvin for his take. His eyes grew large.

“Well, Earl is Earl and Marshawn is Marshawn,” he said, laughing. “They got one vision.”

It was as good as any guess about the two most unconventionally wrapped Seahawks.

So, in the unsurprising unavailability of Lynch, I asked Thomas what was up.

“Just a mutual understanding,” said Thomas, matter-of-fact. With some prompting, he unwrapped a little of the mystery. It turns out that the two had no friendship prior to this season. Each apparently gave the other a wide berth.

“The biggest surprise to me out of this year is our relationship,” Thomas said.  “Since I’ve been here, we never really connected. I decided to go talk to him and see what kind of guy he was.

“I realized he’s just like me in a lot of ways.”

The popular mythology around team sports is that there are great friendships, brotherhood and camaraderie among teams who claim dedication to teamwork and esprit de corps. That’s how it was like when we were kids, right?

That happens sometimes, and probably more with the Seahawks than most sports organizations. But the locker room and clubhouse in team sports are like any other workplace. The variety of personalities and backgrounds can create as much friction and resentment as friendships and fun, pressurized by the hyper-competitive stakes of millions of payroll dollars and acute awareness of the brevity and vulnerability of careers.

Some get close. Some stay distant.

Then there are the eccentricities. Lynch is the ultimate iconoclast, alternately hilarious and weird even to those he trusts and likes. Thomas, too, while more open and engaging, yearns for perfection and nearly leaves radiation burns on those who brush up against his intensity.

“He’s a dawg,” said Thomas, deploying a popular street term of endearment. “His whole demeanor. He’s a man among boys out there.”

“I went up to him,” he said. “Me listening to my inner voice. My inner voice is never wrong.”

Thomas is a big believer in connections, passion and light-wave-bending concentration. Listening to his post-game chats, words come out so fast that they smash together like derailing train cars, leaving journalistic investigators to sort what he said.

Among many learnings, Thomas wants to know how and why his teammates are driven. He didn’t explain exactly what Lynch told him, but he came away favorably impressed. He was asked if he found a kindred spirit.

“Definitely,” he said. “I feel like that with all the vets. They found their love again. I’m glad to be a part of it. I think my spirit is very infectious. I think when you talk to the older guys, you see that they’re back to doing what they love again.

“I love stuff like that. When you’re on the same team with the same people . . . we do a great job of not running away; we just grow. It may be some bitter moments, but at the same time, we have a great responsibility to detach ourselves and understand the bigger picture.

Some may see psychobabble here, but Thomas would happily raise a championship ring into the grill of the skeptic. These disparate guys have come together in ways common and startling to return again to the championship precipice, despite all the impediments, controversies and distractions that are embedded in the NFL system to deconstruct champions.

Sometimes it’s hard to explain. Then again, the fans’ only obligation is to enjoy.

And beware the stare. When Thomas and Lynch lock eyes, back away slowly. Forces are at work beyond what lesser mortals can bear.