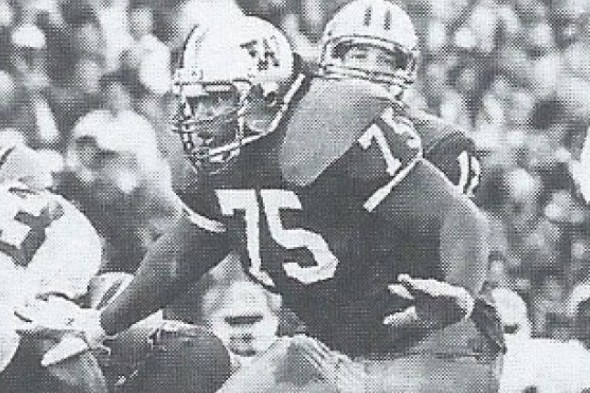 Lincoln Kennedy was a two-time All-America tackle for the Huskies in 1991-92. / David Eskenazi Collection

Lincoln Kennedy, a member of the University of Washington’s 1991 co-national championship team and one of the most decorated offensive linemen in school history, was elected to the College Football Hall of Fame Friday. The National Football Foundation made the announcement.

A unanimous All-America selection in 1992, Kennedy twice won the Morris Trophy (1991-92), presented annually to the Pac-12’s top offensive lineman. During Kennedy’s senior season, the Huskies averaged 387.6 yards per game, largely due to his blocking.

Kennedy was one of four finalists for the Lombardi Award as a senior and a semifinalist for the Outland Trophy. He allowed only two sacks in his four years in the UW program.

Kennedy represented the Huskies in the 1993 East-West Shrine and Hula Bowl games.

After finishing his UW career, Kennedy went to the Atlanta Falcons in the first round (ninth overall) of the 1993 NFL draft. He played 11 seasons, mostly with the Oakland Raiders. He earned three Pro Bowl invitations and played in Super Bowl XXXVII.

Kennedy is the 12th former Washington player elected to the College Football Hall of Fame and the first since DT Steve Emtman, a former teammate, was enshrined in 2007.

Brian Bosworth, who played for the Seahawks from 1987-89 following his career at Oklahoma, was also elected.

Kennedy will be formally inducted Dec. 8 at the National Football Foundation awards dinner in New York.