The Seahawks Saturday night became the first team since the 2005 New England Patriots to win a playoff game the season after winning the Super Bowl. 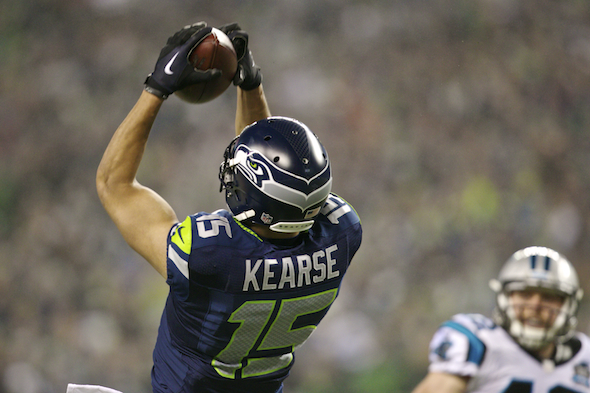 The Seahawks resoundingly quashed one Super Bowl jinx Saturday night, becoming the first defending champion since the 2005 New England Patriots to win a playoff game. In emphatic fashion, with a big second half, the Seahawks rolled to a 31-17 victory over the Carolina Panthers at CenturyLink Field to reach their second consecutive NFC Championship.

With eight consecutive playoff wins at home, the Seahawks will face the Green Bay Packers next Sunday. The Packers defeated Dallas 26-21 at Lambeau Field Sunday.

“This is just so much fun,” said coach Pete Carroll. “I’m glad we have an opportunity to bring another one to the 12s next week.”

Russell Wilson threw three third-down touchdown passes to three receivers and Kam Chancellor starred defensively with eight tackles and the game-clinching pick six. The Seahawks turned a close game (up 14-10) at halftime into a rout.

Wilson threw a 15-yard score  to Doug Baldwin in the first quarter, a 63-yard bomb to Jermaine Kearse in the second and a 25-yarder to TE Luke Willson in the fourth.

The throw to Willson staked Seattle to a 24-10 lead. Then Chancellor, who stunningly hurdled the Carolina offensive line twice  — a la Edwin Moses — in an attempt to block field goals, iced it with a 90-yard interception return, the longest-scoring play in Seattle’s postseason history.

On a night when the Panthers held the Seahawks to 100 rushing yards, 59 by Marshawn Lynch, Wilson was nearly flawless. He completed 15 of 22 for 268 yards, didn’t throw an interception and finished with a 149.2 passer rating (158.3 is perfect).

More significantly, Wilson on third down went 8-for-8 for 199 yards and all three of his scores.

Although the Panthers controlled the ball for nearly 10 minutes longer than the Seahawks, Wilson countered with big plays. After he gave Seattle a 7-0 lead with the pass to Baldwin, Newton took the Panthers 79 yards in 14 plays, throwing the first of his first two touchdown passes to rookie Kelvin Benjamin.

Wilson’s bomb to Kearse, who caught three passes for 129 yards, gave Seattle a 14-7 lead, but Newton got the Panthers into scoring position just before halftime.

FS Earl Thomas nearly intercepted Newton at the goal line — the officials ruled he didn’t control the ball as he landed — and that provided Carolina an opportunity for a field goal.

Chancellor hurdled the Panthers’ offensive line in an attempt at a block, but a penalty on Carolina wiped out the play. On Graham Gano’s re-try, Chancellor again leapfrogged the  line, but ran into Gano, whose kick was shanked. Since the Chancellor penalty made for a third attempt, Gano finally succeeded to make it 14-10 at halftime.

After Steven Hauschka hit a 37-yard field goal early in the fourth quarter, Willson made two spectacular plays. He caught a short pass, was wrapped up, but broke free and turned the play into a 29-yard gain. Then he caught a 25-yard touchdown pass.

Willson, an emerging presence in Seattle’s offense, said, “I had never scored a touchdown at home in front of the 12s, and I figured this was the time to do it.”

“Everything started with the offensive line,” said Wilson, sacked twice. “They gave me time to make some decisions. “It’s exciting to be back in the NFC Championship but the job isn’t done. Well take everything from here one game at a time like we always do. Whoever we play next (Dallas or Green Bay), they’ve got phenomenal quarterbacks, so it’s going to be one for the ages.”

The 63-yard touchdown pass from Wilson to Kearse in the second quarter was the longest in Seattle postseason history, eclipsing the mark of 56 from Dave Krieg to Steve Largent at Miami Dec. 29, 1984 . . . Wilson has a 25-2 record at CenturyLink Field, including regular season and postseason . . . CB Byron Maxwell, sick earlier in the week, left the game early with shortness of breath and was replaced by Tharold Simon. Maxwell played on special teams . . .WR Paul Richardson suffered a sprained knee in the second half and did not return . . . Center Max Unger, who had just returned to the lineup, rolled his ankle in the fourth quarter. No prognosis yet on the severity . . . The Seahawks are 13-12 all-time in the postseason with a 10-2 home record.

The NFC Championship between the Seahawks and either the Packers or Cowboys will kick off at noon next Sunday on FOX.