Against Carolina’s formidable defense, Seahawks QB Russell Wilson had one of his best passing performances of his NFL career. Nice timing. 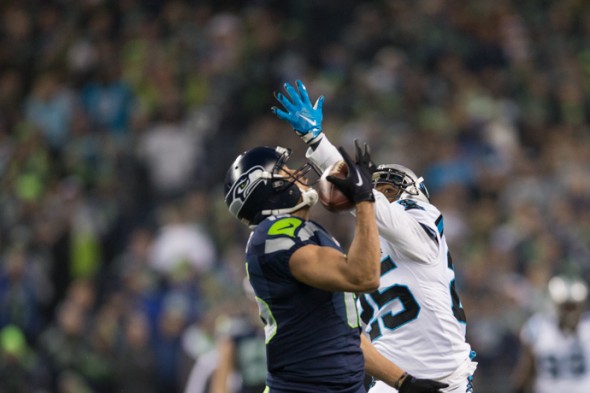 It took a perfect throw from Russell Wilson and a perfect catch-and-run from Jermaine Kearse to complete this 63-yard touchdown reception. / Drew McKenzie Sportspress Northwest

Well, not all the time, but for a quarterback known to inflict as much damage running as through the air, Wilson paced the Seahawks (13-4) to a 31-17 win over the Carolina Panthers Saturday night at CenturyLink Field in the NFC divisional round with one of his most efficient passing performances in recent memory.

“To have that guy perform like he does but also his leadership in the huddle, on the sideline, the way he threw the ball and even the few plays he was forced to scramble . . .  it’s pretty unbelievable the things he does in this league,” said TE Luke Willson, who caught a 25-yard touchdown pass early in the fourth quarter to give Seattle a 24-10 lead.

With about a minute left in the first quarter, Wilson found perpetually pissed-off WR Doug Baldwin for a 16-yard strike after recognizing at the line of scrimmage that the Panthers were in “cover zero” — a blitz. Wilson changed the play before lofting a perfect throw to Baldwin in the back of the end zone. Baldwin said he knew FS Tre Boston had inside leverage, so he cut outside.

“If you take a look at it, it’s actually very similar to the touchdown that we had in the Eagles game,” Baldwin said. “Won’t give it away, but it’s very similar. We got the same protection, the same look. If you watch me, you see me point to the guy knowing that he’s about to blitz. (Wilson) saw it before I did and threw a beautiful ball and gave me a chance to go up and get it.”

“He’s a sharp football player . . . he caught us a couple of times in blitzes when we were bringing pressure on him, trying to get after him,” Panthers coach Ron Rivera said. “He read that, they picked him up, they made some good plays. There is a reason why they are in the situation they are.”

With the score tied at 7 in the second quarter following a 14-play, 79-yard Panthers touchdown drive, Wilson, on third-and-seven, responded with a lob pass intended for WR Jermaine Kearse as Kearse streaked across the field. Panthers rookie CB Bene Benwikere was draped in coverage.

It would take a perfect throw. Wilson delivered it, while Kearse fended off Benwikere with one hand and brought in the pass with the other.

Kearse capped the 63-yard touchdown reception by diving into the front left pylon of the Clink’s north end zone. It marked the longest scoring passing play in Seahawks postseason history, surpassing a 56-yard touchdown from Dave Krieg to WR Steve Largent against the Miami Dolphins in 1984. For Kearse, it was his third consecutive postseason game with a touchdown.

“That’s just what pedestrian, average receivers do,” Baldwin quipped of Kearse’s catch. “I see that every day in practice so that’s no surprise to me.”

Kearse led all receivers with a career-high 129 yards. Willson had a team-high four receptions for 68 yards. And Baldwin had three catches for 38 yards. They accounted for Seattle’s three offensive touchdowns. All came in third-and-long situations, when the Panthers knew the Seahawks were likely to throw.

“That’s a fantastic night, coming through in the critical situations,” coach Pete Carroll said. “That’s not a one-guy show, but (Wilson) certainly had some stats on third down tonight.

It was needed on a night the Seahawks rushing offense, first in the NFL during the regular season, had 100 yards, almost 50 percent less than its average. RB Marshawn Lynch ran 14 times for 59 yards, the highlight coming when he broke a 25-yarder in the second half that helped set up Steven Hauschka’s 37-yard field goal.

The rest came from Wilson.