Thiel: ‘Dark Knight’ rises, as do the Seahawks

Goes by Batman, Kam Chancellor does. He helped saved Gotham West, and entertained the football nation with feats previously unseen. 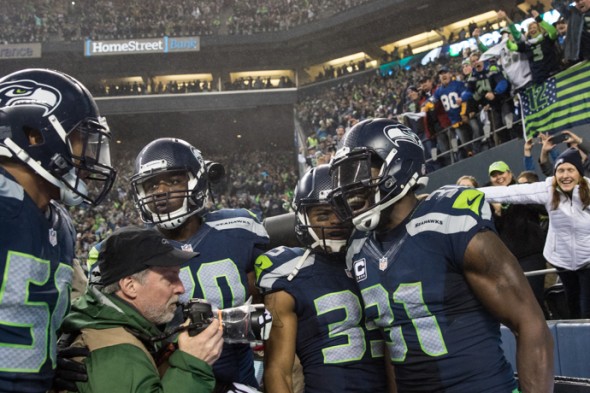 Befitting an 11-point underdog on the road, Carolina coach Ron Rivera hoped the Seahawks would help with a slip-up or goof: “We needed them to make some mistakes. But it didn’t happen. They did some things that lead to winning championships.”

In fact, a shot at a championship is next on the Seattle agenda, for the lands and treasure of the NFC, in eight days against Green Bay — despite, contrary to Rivera’s claim, making mistakes Saturday night. But even the fails were talked about with awe reserved for movie special effects.

Not once, but on consecutive plays just before halftime, SS Kam Chancellor stunned the athletics world when he leaped over the Panthers’ offensive line in attempts to block field goals. Both were thwarted by penalties, but not before the NFL bore witness to another DC Comics moment of preposterousness from the Seahawks.

Surrounded by a battalion of reporters at his locker, Chancellor was asked if the nickname “Superman,” appropriated by Carolina QB Cam Newton, was well, misappropriated.

“He can stay Superman,” Chancellor said, grinning. “They call me Batman — The Dark Knight.”

Let’s roll with it. Personally, I like Chancellor The Canceler, but that does not come with stately Wayne Manor or the Batmobile.

We are in the entertainment world, and the Seahawks these days are more entertaining than cute kitten photos.

Batman had eight solo tackles and a soul-sucking 90-yard pick-six with six minutes left to seal the 31-17 playoff win at the Clink before 68,524 ultra-amped patrons. But Chancellor’s Olympics-class leaps were the hottest matter of did-you-see-that? curiosity.

Chancellor, another of the Seahawks’ low-in-the-draft gems (fifth round), certainly was the right athlete to attempt the feat, even though he missed the first time he tried it a couple of years ago.

“It was a failed mission,” he said. “I hit the center’s back and fell over.”

This time, film study disclosed that the Panthers’ special-teams center and right guard stayed low on their blocks.

“We saw something we could attack,” he said. “We decided to put it in. It looked good all week in practice.”

He soared over the line and pounced into the backfield, but Graham Gano got off the kick in time and made it — only to be denied by a penalty. Re-kick from five yards back.

“I got there the first time, and it looked good,” Chancellor said. “So I said, ‘Let’s try it again.”

Gano, flummoxed by the audacity of a second try, shanked the ball hard left — so far left that Chancellor couldn’t get a piece of it. Which was unfortunate for him, because that would have nullified a call of running into kicker, which Bat . . . Chancellor clearly did.

“‘Almost’ doesn’t count,” said Chancellor. “Once he’d seen me, he just shanked it.”

There was no third try. Perhaps The Joker called in a fresh blocking scheme, because Gano got off a 35-yarder that put three points back up to close out one of the oddest special-teams sequences in playoff history.

“It was extremely well orchestrated,” said coach Pete Carroll of the audacious feat. “They really didn’t have enough time to adjust after the first attempt. Unfortunately, the kicker kicked it so poorly that Kam couldn’t block the second one. Then we roughed him.

“So it was just kind of a calamity there.”

Yes, but it was the sort of calamity that is usually accompanied by calliope music. Don’t dare take eyes off these guys.

As per usual with the Seahawks, defense carried the day, even though the Panthers had more yards, first downs and time of possession. The difference was turnovers — an interception by Richard Sherman, a fumbled handoff by Newton and the killer interception by Chancellor.

They were the typical errors of the lesser experienced — the Panthers last weekend won their first playoff game in nine years, while the Seahawks are in their ninth postseason in 12 years, and are on a four-game unbeaten streak.

The Chancellor pick was a first on a couple of accounts — it was the longest scoring play in Seahawks post-season history, eclipsing by three yards Percy Harvin’s kickoff return in the Super Bowl. (“It was?” said Chancellor. “Gosh.”). And it was the first time in his career he scored on a pick-six.

“Nope. Never,” he said, while cautioning that he spent much of his youth as a quarterback and running back. The Panthers, down 24-10 in the final period, were moving in big chunks down the field to attempt to stay in a game that was slowly crawling away from them.

On second-and-1 from the Seahawks’ 15-yard line, Newton dropped back to pass, an odd call in a short-yardage situation.

“The receiver (Kelvin Benjamin) was right next to me in my peripheral vision, then I saw the D-line getting pressure on Cam,” Chancellor said. “You could see he wanted to get rid of the ball fast. He threw it right to me and I finished it off.

“All I saw was green. Green means go.”

The long run gave the crowd, which per usual stood for nearly the whole game, a chance to jump and scream, which they did repeatedly, reaching an audio apex that presumably bent some seismologists at the waist, looking at their instruments.

The moment was riveting for more than the score. While this team is full of provocative personalities, there may be none more respected than Chancellor, because he is always a reserved man of deep faith who steps forward only reluctantly. But few play with as much ferocity.

“He was on fire, man,” said LB K.J. Wright. “That’s our captain. I love the way he plays. He brings so much energy to this team. Big hits. Pick sixes.

“Everybody looks up to that guy. When I look at him I just get inspired. He’s a big-time guy.”

Even when he fails, he fails big. As Rivera discovered, the fails with the Seahawks never happen enough for the rest of the NFL.