The 80th Sports Star of the Year program will be held Jan. 21 at Benaroyal Hall. These 10 athletes had the best careers after winning the award. 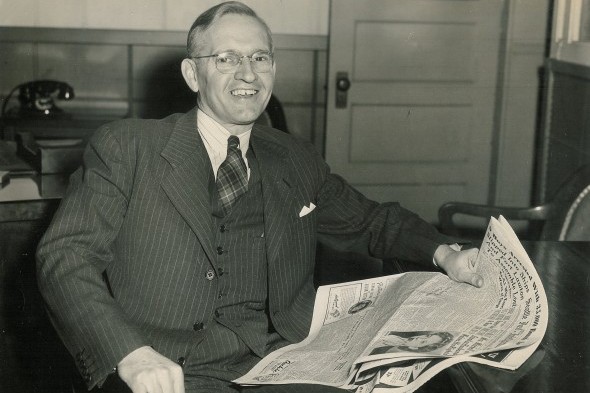 Seattle Post-Intelligencer columnist Royal Brougham launched the Man of the Year (now Star of the Year) program in 1936 by asking his readers a simple question in his “Morning After” column. / David Eskenazi Collection

Seattle Post-Intelligencer sports columnist Royal Brougham created the Man of the Year (now Sports Star ) award in 1936 to recognize the city’s most accomplished athlete or coach from the previous 12 months. Brougham saluted the first winners at a downtown luncheon he dubbed his “little clambake,” and the affair proved so popular it morphed into an evening banquet carried on live, local television.

Today, the Sports Star of the Year program is an awards-show gala, replete with a red carpet. The next edition  Jan. 21 at Benaroyal Hall presented by MTR Western and the Seattle Sports Commission, will be the 80th in the event’s history. Tickets for this year’s event can be purchased here. 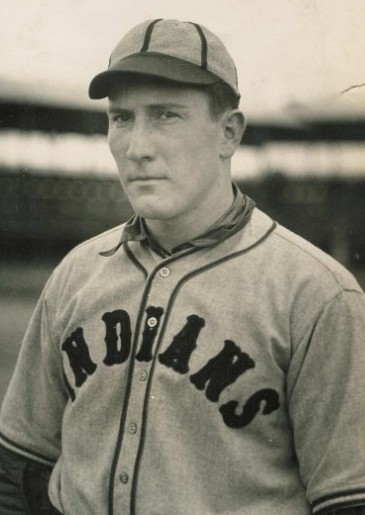 Just out of Franklin High, Fred Hutchinson signed with the Seattle Indians, re-christened the Seattle Rainiers as the 1938 season opened. Hutchinson won 25 games that year en route to being named Minor League Player of the Year by the Sporting News. / David Eskenazi Collection

Many winners claimed awards following their apex athletic years. Such was the case with running back Shaun Alexander, the top male professional of 2005. Alexander led the NFL in rushing and touchdowns and helped the Seahawks to their first Super Bowl appearance.

Such was also the case with Mary Whipple, the top female winner in 2012 when she ended her national team rowing career with her third Olympic gold medal, achieved in women’s eights in London.

Numerous athletes became Stars of the Year at the mid-point of their careers, among them Steve Largent (football, 1985), Michelle Akers (soccer, 1996) and Gary Payton (basketball, 1997). Far fewer won at the outset of their careers. The following athletes had the best careers after winning the Star of the Year (Russell Wilson, a winner last year, seems a cinch to join the following list):

SSOY winner, 1938: A rookie with the Seattle Rainiers, Hutchinson compiled a 25-7 record with a 2.48 ERA and 145 strikeouts, a performance that netted him the Sporting News Minor League Player of the Year award. Two performances in particular stood out: On Aug. 12, Hutchinson’s 19th birthday, 16,354 fans crowded into Sicks’ Stadium and sat enthralled as Hutchinson won his 19th game. Five days later, Hutchinson scored his 20th victory, 9-0 over the Sacramento Solons, allowing three hits while striking out 12.

Post SSOY: The Rainiers sold Hutchinson to the Detroit Tigers in the winter of 1938 for three players and $50,000, receiving a nucleus of players who would help them win three consecutive Pacific Coast League pennants from 1939-41.

Hutchinson subsequently won 95 major league games for the Tigers. He also managed the St. Louis Cardinals and Cincinnati Reds, including the Reds’ 1961 World Series team. Hutchinson returned to Seattle in 1955, and guided the Rainiers to that year’s PCL title.

Two years following Hutchinson’s death from cancer, Baseball Commissioner William Eckert presented the first Hutch Award to Mickey Mantle, citing the “tenacious manner” in which the Yankees center fielder had battled injuries for much of his career. Tenacity not only applied to Mantle, but to Hutchinson, probably his principal asset, in sports and in life. 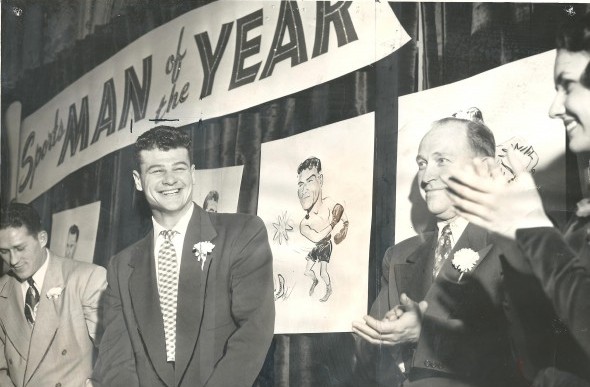 Hugh McElhenny, a future member of the College Football Foundation Hall of Fame and Pro Football Hall of Fame, won the 1951 Man of the Year award after his record-setting football career at the University of Washington. / David Eskenazi Collection

SSOY winner, 1951: McElhenny finished his 28-game University of Washington football career as the school’s all-time leading rusher, its greatest touchdown producer, and the only player in UW history to score on three plays – rush, punt return, kickoff return – of 90 yards or longer.

Post SSOY: A year after claiming the Sports Star of the Year, McElhenny began his NFL career by scoring on a 40-yard touchdown run on his first pro play for the San Francisco 49ers. He was the NFL’s Rookie of the Year in 1952 and, over the next decade with San Francisco, Minnesota and Detroit, ran for 5,281 yards and 60 touchdowns.

The 125 points that McElhenny scored in 1951 for the Huskies stood as a school record for 45 years. 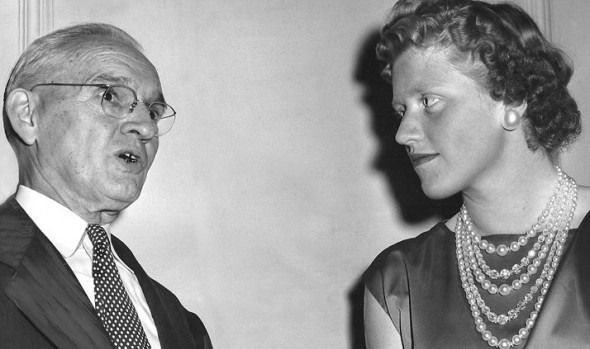 SSOY Winner, 1957:  The 18-year-old Kirkland, WA., native trumped future Naismith Basketball Hall of Famer Elgin Baylor, then playing for Seattle University, and Olympic swimmer Nancy Ramey. The youngest individual ever to appear on a Star of the Year ballot, Carner, then JoAnne Gunderson, won the award largely on the basis of capturing the 1957 U.S. Women’s Amateur at Del Paso Country Club in Sacramento with an almost absurd 8 & 6 victory over Anne Casey Johnstone.

Post SSOY: Carner could have won the Star of the Year numerous times after 1957 — in fact, in almost any year through the mid-1980s. Carner won the U.S. Women’s Amateur again in 1960, 1962, 1966 and 1968. She concluded her amateur career in 1969 when she took the Burdine Invitational, becoming the last amateur to win an event on the LPGA Tour.

If anything, Carner’s LPGA career exceeded her amateur one. From Sept. 12, 1970, when she defeated Marilynn Smith in a playoff to win the Wendell-West Open, until Sept. 15, 1982, when she scored a two-stroke victory over Jan Stephenson at the Safeco Classic at Meridian Valley, Carner won 43 LPGA events, including the 1971 and 1976 U.S. Women’s Open.

Just 10 months after leading Seattle U. to the NCAA Final Four, Baylor returned to Seattle with the Minneapolis Lakers for the first NBA exhibition game in Seattle history. Baylor scored 30 points in a loss to the Boston Celtics in front of 11,500 fans at Hec Edmundson Pavilion. / David Eskenazi Collection

Post SSOY: Baylor played 13 seasons for the Minneapolis/L.A. Lakers, won the Rookie of the Year award in 1959, made 11 All-Star teams, appeared in eight NBA Finals, and was a unanimous choice for induction into the Naismith Basketball Hall of Fame in 1977.

In Game 5 of the 1962 NBA Finals, Baylor scored a playoff record 61 points and added 22 rebounds for the Lakers against the Boston Celtics.

SSOY winner, 1977: Moon won the Co-Pac-8 Player of the Year award and was named 1978 Rose Bowl Most Valuable Player after quarterbacking the Washington Huskies to their first victory in Pasadena since 1961.

Post SSOY: Undrafted coming out of Washington, Moon signed with Edmonton of the Canadian Football League and led the Eskimos to five consecutive Grey Cup titles before joining the Houston Oilers as a free agent in 1984. 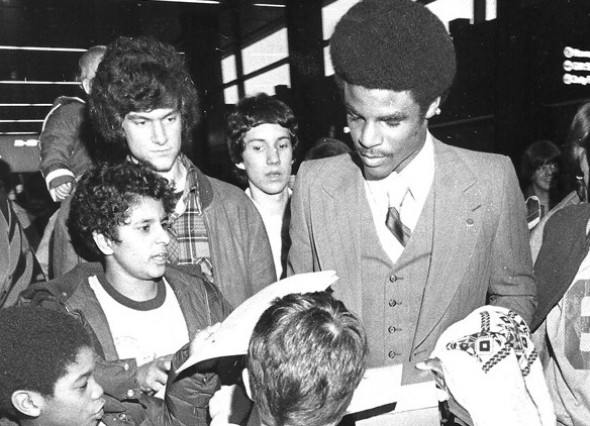 After struggling for two years, Moon developed into one of the most accomplished passers in NFL history, throwing for 49,325 yards and 291 TDs in a 17-year career with Houston, Minnesota, Seattle and Kansas City that included nine Pro Bowl appearances.

The Associated Press Offensive Player of the Year in 1990 and Pro Bowl Most Valuable Player in 1997, Moon entered the Rose Bowl Hall of Fame in 1997 and the Pro Football Hall of Fame in his first time on the ballot in 2006.

SSOY winner, 1989: Griffey took home the Star of the Year award at 19 after completing his rookie season in the major leagues with a .264 batting average, 16 home runs and 64 RBIs.

Post SSOY: Griffey made the All-Star team for the first time at 20 in 1990 and was selected 13 times after that in a career that ended in 2010. Griffey won 10 Gold Gloves, eight Silver Slugger awards and was a unanimous Most Valuable Player selection in 1997.

Griffey is the most significant player in Seattle sports history, not merely because he hit 630 career home runs, including 417 for the Mariners, and made numerous enthralling catches in center field, but because he was the franchise’s first big gate attraction, first superstar, most forceful personality, and the biggest reason the franchise was able to escape its dubious history to become a Northwest summer-entertainment fixture and one of the most successful business operations in pro sports. 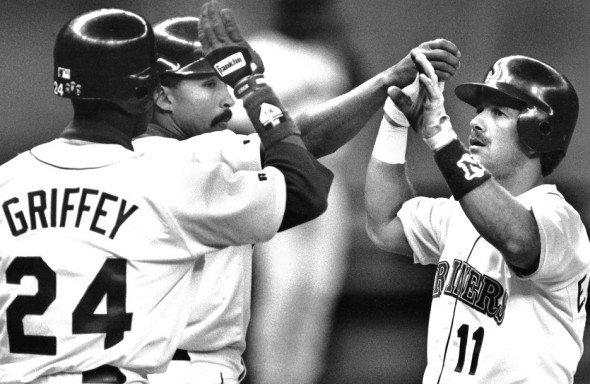 Griffey hit the late August home run that launched the Mariners on their remarkable comeback run in 1995, scored the run that beat the Yankees in the 1995 ALDS and, in 1999, was named one of the 100 greatest players of the 20th century as well as the player of the decade for the 1990s.

Griffey comes up for election to the Baseball Hall of Fame next year and should breeze into Cooperstown as easily as former teammate Randy Johnson did earlier this month.

Post SSOY: Martinez spent his 18-year career with the Mariners, retiring in 2004 as the most respected player in franchise history. He won two American League batting titles (also 1995), five Silver Slugger awards and made seven AL All-Star teams. On the occasion of his retirement, Major League Baseball renamed the Designated Hitter of the Year award the “Edgar Martinez Award.”

The Mariners inducted Martinez into their Hall of Fame in 2007, and he has been on the Baseball Hall of Fame ballot since 2010. 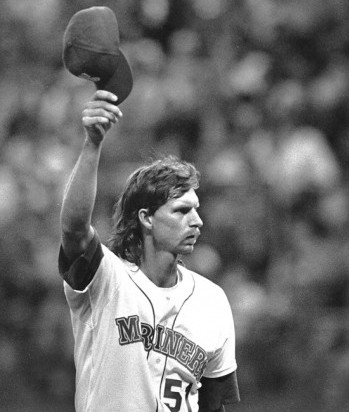 Post SSOY: The Big Unit, who came to Seattle as a throw-in a trade that sent staff ace Mark Langston to Montreal, not only turned into the best pitcher in Mariners history but into the best left-hander of his generation. He made five All-Star teams while with the Mariners, 10 overall, and won five Cy Young awards, including four in a row after leaving Seattle.

Johnson threw a no-hitter for Seattle (June 2, 1990) and a perfect game for the Arizona Diamondbacks (May 18, 2004). He led the majors in strikeouts nine times, tied the major league record with 20 strikeouts (May 8, 2001), won the Triple Crown of pitching in 2002, and finished his career with 303 victories and 4,875 strikeouts, second-highest total in history. With Curt Schilling, he was co-MVP of the 2001 World Series.

SSOY winner, 2001: Ichiro won in a landslide vote after leading the Mariners to a record 116-win season in which he collected 242 hits (most in the majors since 1930), led the American League in batting (.351), won Most Valuable Player and Rookie of the Year awards and took home Gold Glove and Silver Slugger trophies.

Ichiro, who led the AL in hits seven times, also won the Most Valuable Player award at the 2008 All-Star game by hitting the first inside-the-park grand slam in the event’s history.