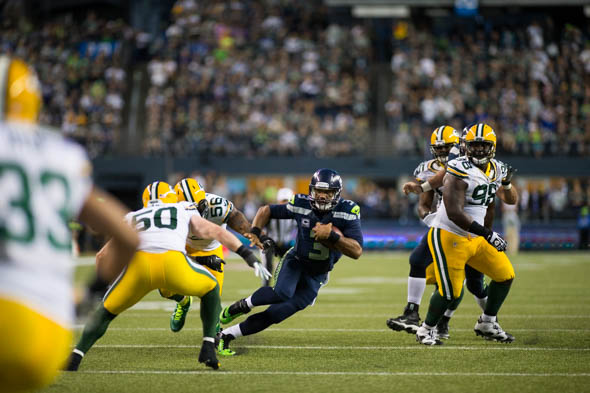 He hasn’t seen action all season, but he might in the NFL Championship Sunday against Green Bay. Third-string QB B.J. Daniels will fill the roster spot of injured WR Paul Richardson and may play on special teams — or play a little wide receiver or running back, Pete Carroll said Monday.

The Seahawks coach is normally reticent about passing on roster replacements early in the week. But it seems as if he wanted to give the Packers something to think about. Daniels, a 5-11, 217-pounder from the University of South Florida, has seen no action this season, although he was active for four weeks.

Daniels, 25, has spent practice time at both positions, and he could also return kicks in place of Richardson, whom the club confirmed was out with a torn ACL from Saturday’s win over Carolina. He was placed on injured reserve, meaning he’s done for the postseason.

“He’s been really impressive to us all year long,” Carroll said. “It’s a classic example of rewarding a guy that has been competing his butt off. He’s going to help us in a number of spots.

“Of course he’s a third-string quarterback, but we’ll work to see how he fits in on special teams. He’s a backup returner for us. He can play running back and wide receiver. He’s a very versatile guy for us to bring to life right now.”

Given the usual nine-month recovery period, it sounds as if Richardson, this year’s No. 3 receiver (28 catches, 271 yards) behind Doug Baldwin and Jermaine Kearse, won’t be ready for the 2015 season opener.

The player most likely to get Richardson’s cut of the action Sunday is Kevin Norwood, who was inactive last week. The fourth-round rookie from Alabama has nine catches for 102 yards.

“We totally trust that he knows what’s going on and can make good plays,” Carroll said. “They’re a little different in style, but we think he’s going to be a very effective player. We just haven’t seen a lot of him. We’re okay about that.”

Two other injured starters, CB Byron Maxwell and C Max Unger, apparently are doing better. Maxwell played only four snaps on special teams because of illness that lingered through the game Saturday, but “feels fine” as of Monday, Carroll said. Unger rolled his previously injured ankle in the fourth quarter and came out, but appeared all right Monday.

Another who missed Saturday, TE Tony Moeaki, is returning after a calf injury.

Regarding Green Bay, which has lost its past two games at the Clink, including the semi-immortal, highly controversial “Fail Mary” game on a Monday night 2012 that helped end the lockout of NFL referees, Carroll said the Packers followed a seasonal track similar to Seattle — slow start, furious finish, winning seven of their final eight, plus Sunday’s 26-21 playoff win over Dallas.

“I don’t think it’s that much different, except their guys are coming through,” he said. “They’ve really turned their season around statistically from the first eight games to the second eight games. Their rushing stats on have gone way up on offense and gone way down on defense. They’ve gone through a transition during the course of the season that has really turned them into playing great football here at the end.

“As we went against them in the opener, we thought this was the team we would be playing now. It’s matched up pretty well.”

Coach John Fox and the Broncos “parted ways” Monday afternoon following Denver’s elimination from the playoffs by underdog Indianapolis. That makes for a sweep of disarray for all three playoff opponents Seattle defeated a year ago. The 49ers and coach Jim Harbaugh parted ways after an 8-8 season and no playoffs, while the New Orleans Saints finished 7-9 in the NFC South, the league’s worst division . . .  No word yet on whether Seahawks DC Dan Quinn will be a candidate, as he has been for five of the previous six head coaching vacancies  . . . The Packers will arrive Friday in Seattle, a day earlier than usual. But it’s not to acclimate for the elevation. A reporter Sunday in Green Bay after the Packers’ win over the Cowboys actually asked in a press conference whether Seattle’s altitude would be a factor . . . Carroll was complimentary of the NFL for its noon Sunday start: “I think it’s only fitting that they’re starting the game at 12:00. We worked really hard to negotiate that and finally got that done. Hopefully our 12s will celebrate our 12 o’clock start.”