Packers are better than they were in 36-16 loss. But despite numerous injury losses, so are Seahawks. The secret is scouting and developing guys off the football street. 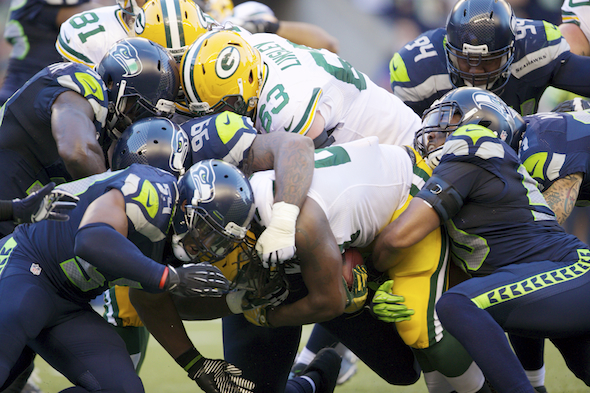 A major story line for the NFC Championship Sunday is how much the Green Bay Packers have improved since the 36-16 loss to the Seahawks at the Clink in the season opener Sept. 4. Better offensive line. Blossoming rookie receiver. Tougher defense against the run. Etc.

All seem plausible. What about the Seahawks?

With such starters gone, how is it possible that Seahawks still made it to 13-4 and are seven-point favorites to win Sunday and return to the Super Bowl?

“We’re better too, you know,” said Tom Cable, dryly. The Seahawks assistant coach and the man in charge of the offensive line takes considerable pride in his ability to coach up the valet parking attendants, bus drivers and construction workers provided by general manager John Schneider to fill holes in the roster.

At times this season, the offense was down to fourth-stringers at center (Patrick Lewis) and tight end (Tony Moeaki), neither of whom was with the Seahawks at the start of the season — or any team — when their phones lit up with a 425 area code.

“It’s our program about developing players,” Cable said. “Something happens, they go in. It’s a philosophy of (the franchise), not just on the O-line. It’s very satisfying when they have success and the team succeeds.”

As Cable said, the defense has its unsung stories too. Before the season, two drafted D-linemen, Cassius Marsh and Jesse Williams, went down. During the season, two more D-linemen, Brandon Mebane and Jordan Hill, were lost to season-ending injuries. Up stepped low-profilers such as O’Brien Schofield and newcomer Demarcus Dobbs, claimed off waivers from the 49ers Nov. 5.

And for the third season in a row, the Seahawks defense is No. 1 in the NFL.

The ability to get league-average play from so many replacement players is an unheralded feat but essential in getting better instead of worse as the season progresses.

“They do a great job at looking at a guy’s true ability,” said DE Michael Bennett of the Seahawks’ talent evaluators. “Some teams just look at a guy’s numbers. But there’s so many measures of a good football player. No matter how fast he runs or how big he is, it’s the intestinal fortitude, and whether he will do what they ask him to do. That’s all the guys they have here.

“All the guys who come here are just like us. Mirror images. Like (DT) Kevin Williams (signed in free agency from Minnesota). He has a wide head, but he has the same heart as us.”

As he should, coach Pete Carroll gave major props to Schneider, the talent guru.

“You have a pool of guys available, we rank them, and then we go with the guy we think is best suited to play with our team in filling needs. You don’t always get everything that you want, but we have a very strict process in figuring out the style of the player.”

The result of the scouting and the development is an injury-tolerant roster (at least in terms of replacement value) that in several respects is better than the 2013 champions’ roster.

“We are deeper — I totally believe that,” Cable said. “From a year ago, we’re deeper in more guys knowing the system.”

There are, of course, a handful of players for whom no equivalent is available. The Seahawks have caught a break there — especially at the key position. Green Bay QB Aaron Rodgers, as you may have heard, has The Limp Seen ‘Round the World.

A calf muscle torn three weeks ago didn’t keep the hobbled Rodgers from throwing dramatically for 316 yards in the 26-21 win over the Dallas Cowboys Sunday for the right to advance to Seattle.

He’s still hurting, and will still play Sunday, which is zero surprise to Bennett.

“He’s not going to miss a championship game,” he said. “It’s the last game of the season. Pull out all the stops. You got all off-season to be injured.

“You have to strain that calf a little more.”

So the Seahawks are better, just as the Packers are better. But Rodgers isn’t.

If you’re searching for the seven points of difference between the clubs, look no farther.