The Packers didn’t throw at CB Richard Sherman in a Week 1 loss at CenturyLink FIeld. Don’t expect that to happen again in the NFC title game. 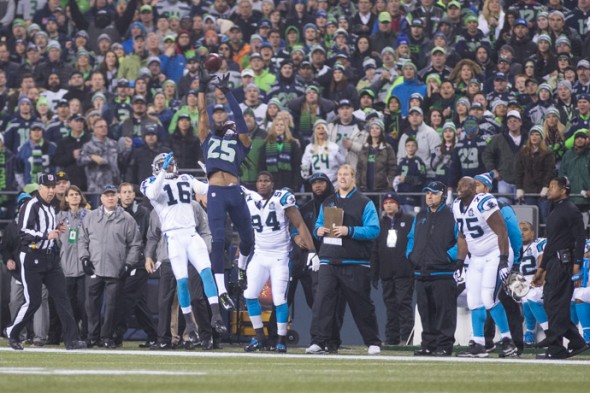 RENTON — After the Seahawks dispatched the Green Bay Packers 36-16 at CenturyLink Field in the regular-season opener, Pete Carroll approached CB Richard Sherman in the locker room and told him not to get frustrated.

Packers QB Aaron Rodgers didn’t once throw in Sherman’s direction. Carroll deemed it a sign of respect and things to come.

Asked Wednesday to describe how frustrated he was by the lack of targets, Sherman said:

He didn’t realize the Packers planned to stay away from the right side of the field — his area in the Seahawks’ cover-2 scheme — until the game was over.

“I never suspected that,” he said. “But that’s not something you think about during the game. You just play every play like the ball’s coming your way.”

Sherman is likely to get more opportunities when the Seahawks host the Packers at CenturyLink Field in Sunday’s NFC Championship (12:05 p.m. FOX).

In Green Bay, reporters asked Rodgers if he planned to test Sherman.

“I plan to throw it to the open guy,” he said. “That’s the way I’ve played for a number of years. I’ll go through my progressions and play the way I’ve always played.

“It’s important to throw it to the right and to the left a little.”

After Seattle’s win, Sherman and Rodgers reportedly had a brief post-game conversation  in which Rodgers told the cornerback, “I hope you get some work this year.”

“I honestly don’t remember,” Sherman said when asked about the conversation. “Sorry about that.”

During the regular season, Sherman had four interceptions and forced a fumble. Then, in the NFC divisional round win against the Panthers, he picked off Cam Newton when the quarterback under-threw a deep ball intended for WR Philly Brown. Sherman said Wednesday it feels like opposing quarterbacks tested him less this season — his interception total was cut in half after eight in 2012 and 2013.

“You have to be aware of him,” Rodgers said. “Not scared of him, but you have a ton of respect for him. Look at the numbers. They don’t lie. Not a lot of guys catch passes on his side, and for the amount of times he’s targeted, his interception totals are very impressive.”

Earlier this week, Packers coach Mike McCarthy indicated his offense changed after Week 1, when Green Bay chose to put star WR Jordy Nelson on the left side of the field to either avoid Sherman or draw him away from his usual coverage area. Over the final six games of the regular season, the Packers committed to the ground game, with former University of Alabama star and reigning AP Offensive Rookie of the Year RB Eddie Lacy (1,139 rushing yards, nine touchdowns) averaging 19.5 carries per contest. They also had a pair of 1,000-yard receivers in Nelson (98 catches, 1,519 yards and 13 touchdowns) and Randall Cobb (91 receptions, 1,287 yards and 12 touchdowns).

“I think they’re unique in how they use Randall Cobb,” Sherman said. “It’s a little bit the way Minnesota used to use Percy [Harvin], use him out wide, put him in slot, and put him at running back. They do same things with Cobb.”

In Week 1 against the Seahawks, Lacy carried 12 times for a season-low 34 yards and had to leave the game in the fourth quarter after colliding with S Kam Chancellor. The Packers’ high-powered offense — ranked first in the NFL with 30.4 points per game — managed 255 total yards and scored six points in the second half.

“They’ve had a real obvious statistical turnaround,” Carroll said. “You guys probably have picked up on it from the first eight games to the second eight games. Their rushing stats have flip-flopped, and that’s a big change in their approach.”

They also benefited from the emergence of rookie WR Davante Adams. The Fresno State product had seven catches for 117 yards and a touchdown in Green Bay’s divisional round win. In Week 1 against the Seahawks, he barely played and wasn’t targeted, while Sherman matched up with Packers wide receiver Jarrett Boykin.

Will the Packers finally test Sherman?

“I would expect that it’s not going to be the same thing where the whole game goes the other way,” Carroll said. “I don’t think that’ll happen.”