Russell Wilson went 8-for-8, 199 yards and three touchdowns on on third-down plays against Carolina, showing what he could do when his offensive line protects him. 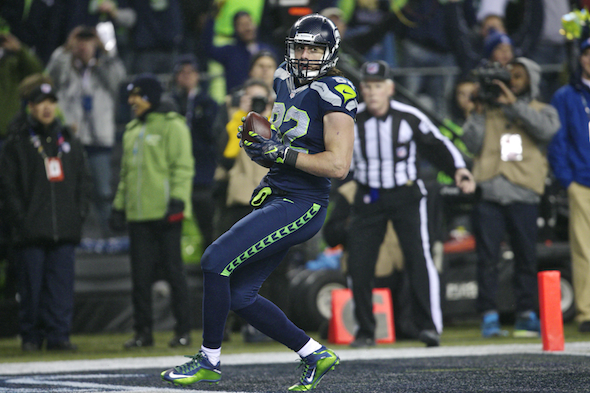 Pete Carroll spends the majority of his press-conference time responding to media inquiries while rarely making one himself. But during Saturday night’s presser following the Seahawks’ 31-17 victory over the Carolina Panthers, Carroll had a question of his own amid commenting on the performance of Russell Wilson, who threw for 268 yards and three touchdowns with a 149.2 passer rating.

“I was really fired up for Russell,” Carroll said. “He especially had a great game on third down. I don’t know what it was, but he must have hit almost everything. I think he had three, third-down touchdown passes, which is just unheard of.”

And then Carroll asked, “How does that happen? Who does that?”

Wilson went 8-for-8 for 199 yards on third down with touchdown passes of 16 yards to Doug Baldwin, 63 to Jermaine Kearse (longest TD pass in postseason franchise history) and 25 yards to TE Luke Willson.

That marked Wilson’s best performance on third-down situations in any of his six career playoff games. In the Super Bowl against Denver, Wilson went 7-for-8 (87.5 percent) for 82 yards (no TDs) on third down, and in the NFC Championship against San Francisco two weeks earlier his third-down line was 8-for-10 for 75 yards (no TDs).

The 8-for-8 for 199 yards and three TDs against the Panthers, especially considering Wilson’s 24.9 yards per completion, ranks as the best third-down performance by a playoff quarterback in the NFL’s 162 postseason games played between 2000 and last weekend.

In fact, only two others, including Peyton Manning twice more than a decade ago, completed 100 percent of their third-down passes in a postseason contest. These are the games and quarterbacks, listed chronologically (minimum 6-for-6):

Other notable 3rd-down playoff performances since 2000

Sacked only twice by the Panthers, the usually knocked-down-and-harrassed Wilson gave a glimpse of what he can do when he throws more quickly and is protected adequately by his offensive line, a luxury provided nearly every week to Tom Brady and Aaron Rodgers.

Sunday, Wilson is paired against the NFL’s master at making the most of third-down chances, Cal graduate Rodgers.

Rodgers sports a massive portfolio of achievements, including:

He’s also the league’s best deep thrower. Since 2008, no quarterback has thrown as many 70-yard touchdown passes as Rodgers, who has tossed 16 (Brett Favre and Peyton Manning, 15 each), or completed as many 50-yard passes. Rogers has 49 (Drew Brees 43).

Based on Green Bay’s four losses this season, these seem to be the keys to beating Rodgers:

Seahawks fans are hoping that Rodgers’ left calf injury will be a factor,  but that didn’t seem to affect him much last week in a 26-21 win over Dallas.  After completing 9 of 15 for 90 yards in the first half, Rodgers hit on 15 of 20, including his final 10 in a row, for 227 yards and two TDs in the second half. He finished with 316 yards.

“He only threw for 316, geez,” Pete Carroll said Wednesday. “That’s a tremendous accomplishment. He’s been a great player for a long time and great players have a way of figuring it out. They get it done and still play. They have figured out a way to make him effective, and we’re counting on him to be right on the money with all their offense.”